“Harry Potter” Superfan Buys Bigger House for All Her Merchandise

When you hear the term “Harry Potter superfan,” you usually think of someone dressed in Hogwarts robes, complete with a wand and enough merchandise to fill up an entire room. After all, Harry Potter superfans haven’t ended up in Guinness World Records for having a modest collection. As it turns out, there might be a new entry this year from a fan who had to sell her house because her collection got too big. Oh, if only we Muggles could perform Undetectable Extension Charms.

Tracey Nicol-Lewis from South Wales in the United Kingdom might end up in the next Guinness World Records due to her stunning Potter collection. At the age of 46, she has spent about £100,000 (roughly $140 000) on her massive collection of all things Potter. Because of her large amount of merchandise, she decided to move from her three-bedroom terrace house to a 16-bedroom pub to make room for all the magic. According to Nicol-Lewis, most of her collectibles were stored in the attic of her previous house, and she really wanted to be able to display all the merchandise she collected over the years. Since she now lives in a huge house that used to be a pub, Nicol-Lewis is thinking of renovating the place to create a Harry Potter shrine of sorts.

I was desperate for a place to display them, and now we can turn the house into a museum. Three of the rooms are full of Harry Potter, but it still needs a lot of work. In my last house, I had Gryffindor colours in the living room, but now I want to do something different and make the bar area look more like Hogwarts. 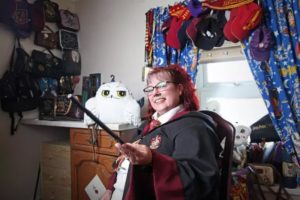 Nicol-Lewis’s obsession with Harry Potter started when she began reading the books while pregnant with her first son in 2002. Shortly after, she started to collect the merchandise available, and her friends caught on to her obsession, gifting her merchandise whenever the opportunity presented itself. Her friends in America even helped her get a wand collection. Her husband, Martin, also chips in from time to time; he recently gave Nicol-Lewis a Harry Potter-themed pen, notebook, and decals. Martin isn’t a fan of Harry Potter, believe it or not, but wholeheartedly supports his wife’s love for the stories. His son, 11-year old Jaiden, loves Nicol-Lewis’s collection. Jaiden probably feels like he’s already going to school at Hogwarts since his entire house is basically Harry Potter-themed. 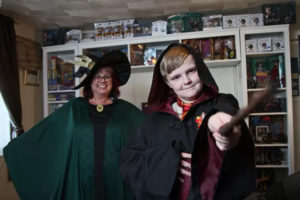 With a collection this impressive, Nicol-Lewis has applied for a Guinness World Record, spending six weeks photographing every single item she owns. She might just break the record. The current record holder is Victoria Maclean from Neath, South Wales, in the United Kingdom. She broke the record in 2019 with a collection she built over 18 years, featuring 3,686 pieces. The record holder before her was Menahem Asher Silva Vargas from Mexico City, Mexico. He had a stunning collection of 3,097 pieces back then, which he built up over 15 years. It broke the Guinness World Record in 2014.

Nicol-Lewis would love to be the new record holder, but for her, the most important thing that came from Harry Potter is all the friends she’s made along the way – that is what truly makes it special. You can have a look at some of the pieces in her collection in the video below.

Do you have a collection that resembles Nicol-Lewis’s? Do you think she has a shot at breaking the record? Drop your thoughts in the comments.