Harry Potter vs. You-Know-Who: A Very Magical Protest in Thailand

The battle of Harry Potter vs. You-Know-Who continues. This time, it takes place in Thailand, where dozens of youths staged an anti-government protest on August 3 to challenge anti-defamation laws that protect the country’s monarch, King Maha Vajiralongkorn, from criticism.

The protesters came dressed in Hogwarts robes and carried their own wand replicas or made their own makeshift ones out of wooden sticks. In line with the protest’s slogan, “Casting the Patronus Charm to Protect Democracy,” participants were even invited to cast the Patronus Charm as a symbolic gesture of protecting democracy in Thailand. 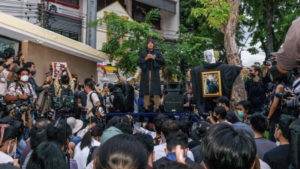 Protesters gather around the Democracy Monument in Bangkok, Thailand. 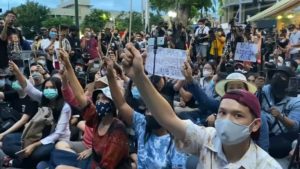 Protesters held their wands up high in an act of unity, similar to how Hogwarts staff and students mourned Professor Dumbledore after his death.

The rally was organized to protest Thailand’s strict lèse-majesté laws, which clamp down on any and all critique against the Thai monarchy. The demonstrators called for the king’s powers to be curbed and for greater democratic reform to be enacted against the increasingly authoritarian nature of the military-backed junta. There was also much dissatisfaction with the government after the coronavirus pandemic led to severe economic woes. The Guardian reports that the Harry Potter theme was chosen“as a reference to increasing injustices under the military-backed government.” 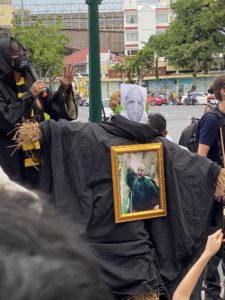 A scarecrow was even affixed with Voldemort’s image!

Speaking to Channel News Asia’s Thailand correspondent Saksith Saiyasombut, one demonstrator shared that “Bringing democracy to Thailand shouldn’t be wizardry.” Additionally, lawyer Anon Nampa told Reuters that “Talking about this is not an act to topple the monarchy, but to allow the monarchy to exist in Thai society in the right way and legitimately under a democratic and a constitutional monarchy.”

Harry Potter was not the sole inspiration for the rally. Many protesters were also seen doing the Hunger Games salute, which has become a symbol of rebellion and solidarity in Thailand. 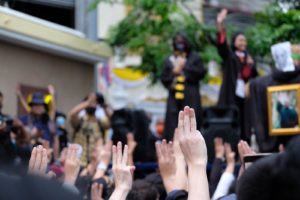 Although banned by the Thai military, the protesters did the three-finger salute from “The Hunger Games”.

Following weeks of protests, perhaps there may be some hope for change. Despite harsh warnings issued to protesters earlier, Thai Prime Minister Prayut Chan-o-cha has relented considerably, announcing that the government is planning a public forum for youth to voice their concerns and opinions about the future of the country. As Neville confidently puts it in Harry Potter and the Deathly Hallows, “When people stand up to them, it gives everyone hope.”