The Linguistic Origins of the Founders

The founders are a fascinating group of people, but we actually don’t know much about them. That’s understandable, given that they supposedly lived at the end of the 10th century, meaning there wouldn’t be that many records left of them by the time Harry was born. And even the information we do have on them could be suspect, since it is very easy for history to twist and change over time. One piece of information we do have, though, is their names, and there is some information that can be speculated about from that. I will only be examining their first names since their last names do not exist outside Harry Potter, and in a realistic context, it’s possible their last names would have become bastardized over the centuries anyway, which is how you could end up with a name like “Hufflepuff.”

According to the Harry Potter wiki, Rowena was born in 10th-century Scotland. However, this where historical information being suspect comes in, because the linguistics of her name does not support that. The name “Rowena” doesn’t actually have a firm point of origin, but none of the proposed theories are Scottish. The first theory is that the name is Welsh, coming from the name “Rhonwen,” coming from the Welsh word rhawn (horsehair). There is a character named Rhonwen in the Welsh Triads, a collection of medieval works of Welsh folklore, the earliest copy of which dates back to the 13th century, which is a bit later than Ravenclaw’s era. The other possibility is that the name is Old English, coming from the name “Hrö∂wyn,” which comes from a combination of the words ron (spear) and  (g)wen (bright). In support of the Old English theory, the name “Rowena” is used in an 11th-century manuscript called The History of the Kings of Britain. The name is spelled a variety of different ways, such as Ronwen, Renwein, and Romwenna. So while we can’t pin down Rowena’s exact point of origin, she’s still much more likely to be Welsh or British rather than Scottish.

Godric is supposedly an English wizard, according to the wiki, and in this case, the linguistics of it actually agree. The name is of Anglo-Saxon origin, coming from the Old English words god and ric (ruler, mighty), a rather fitting name for the heroic persona Gryffindor is often portrayed as having. The name largely fell out of use in the centuries following the Norman conquest, but given that this Godric was supposedly born in the 10th century and the Norman invasion happened at the beginning of the 11th, there’s no contradiction. Indeed, we actually have evidence of several historical figures of the same name that could have been contemporaries or near-contemporaries of Gryffindor, such as Godric of Finchale, an Anglo-Saxon saint, who lived at the very beginning of the 11th century.

So Salazar Slytherin’s origins are apparently up for debate even within canon. However, the wiki’s suggestions of Irish or English definitely don’t line up with the linguistics of his name. Those suggestions come from the Sorting Hat, who in a song describes him as coming from the fens. The veracity of this information is questionable because, on one hand, the Hat would have known the founders, but on the other, it would have known them over a thousand years before writing this song – and who knows how sharp its memories are? Going into the linguistics, though, the name “Salazar” isn’t actually a first name; it’s a surname of Castilian origin. In fact, in the 10th century, it was the name of a noble family who lived in Northern Burgos, Castile, and eventually got a valley named after them. This presents a problem: How does a Castilian last name end up the first name of a supposedly English wizard? I have two possible theories. One is that Salazar wasn’t his first name, and it is either the result of a bastardization of his real name or that his first name was simply lost and Salazar originally was his last name, with the “Slytherin” part either being an add-on or a title of some kind. The other is that Slytherin’s family were Castilian immigrants from Salazar Valley, and named him after their previous homeland. 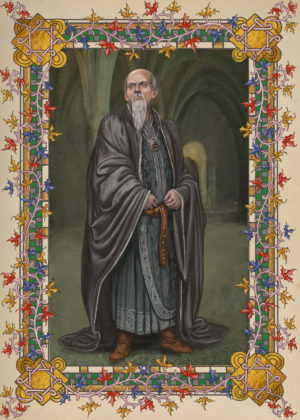 Helga Hufflepuff is supposedly Welsh, which initially doesn’t seem to line up with the linguistic origins of her name. The name “Helga” is obviously Norse in origin, coming from the Old Norse word heilagr (holy or blessed). However, this isn’t actually as contradictory as it seems, since the name “Helga” was actually in use in England before the Norman Conquest. The reason it was in use was because of the Vikings, who in addition to raiding the British Isles also frequently settled there. The era of Viking raids and colonization was between the years 793-1285, with Hufflepuff being born right in the middle. While Vikings mainly colonized eastern England, there were pockets of them that settled in Wales, particularly in the south. As such, it is perfectly possible that Helga Hufflepuff was born in Wales, but descended from Vikings.