Hello, and welcome back to your Daily Prophet coverage of the Toyko 2020 Wizolympic Games. I’m Hiltrude Tuft, reporting from the Kahaku Dome as the kelpie taming event gets underway. The floor of the dome itself has been transformed into a stinking bog, where the competitors will be taming their kelpies today. Each tamer will be expected to perform the Placement Charm to get their bridle in place, but after that, it’s all about personal style! Points are awarded out of ten from each of our five judges, up to a maximum of 50. Contestants who drown or are dismembered are, of course, disqualified except in very special circumstances.

Now, in 2016, we had a relatively safe competition with only four deaths, but there was a lot of criticism from expert Magizoologists of the preparedness of the participants. I think we’re all interested to see what happens in the swamp today and whether it will be as excitingly bloody as this event has proved to be in the past! 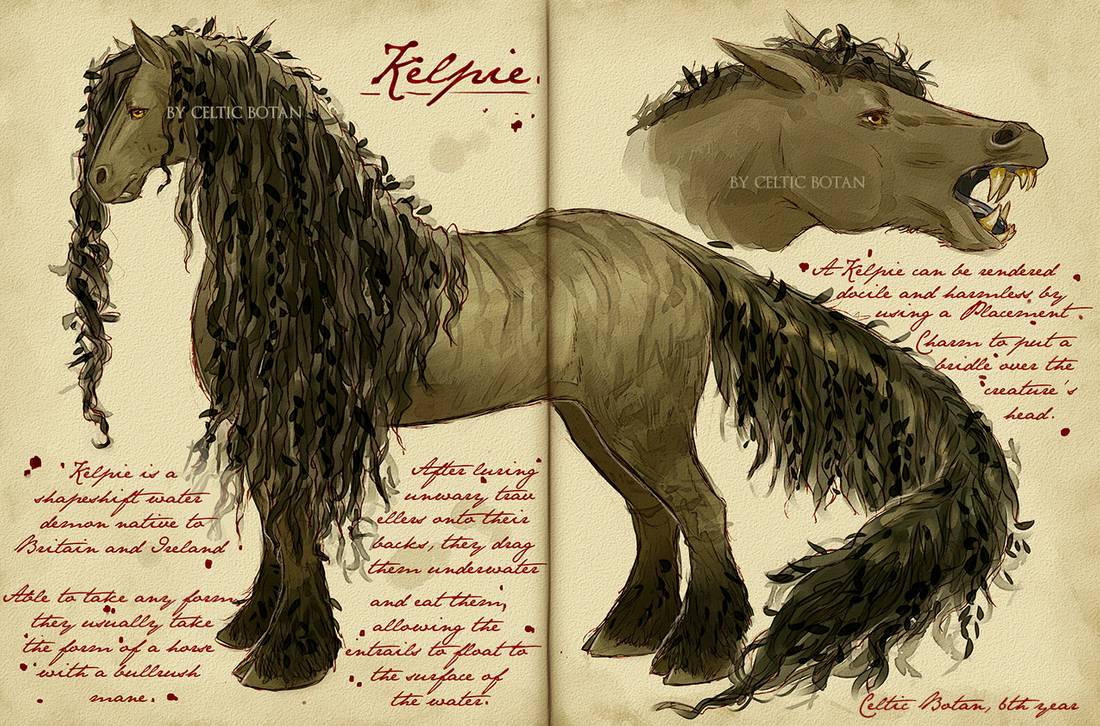 First up today is Polish kelpie tamer Zuzanna Kowalczyk. She’s the youngest tamer we’ve ever had here at the Wizolympics, just squeaking through requirements at 17 years old. She looks confident, though, as she plops into the swamp. Kowalczyk whips out her wand and performs an absolutely perfect Placement Charm. The crowd is on its feet! What an opener. But it’s not over yet! She makes a running leap to mount the kelpie’s back. Oops – her braid has been caught in the kelpie’s bridle. The kelpie is dragging her through the swamp – the stands are surprisingly hushed, her screams are quite audible – and down they go. Bye, Kowalczyk. A bit of an ominous start to the day with a death so soon, but that’s kelpie taming for you! Let’s just give them a chance to do a quick modified Scouring Charm to clean up her remains and we’ll get our next contestant in there.

If Kowalczyk (RIP) was our youngest-ever kelpie tamer, Egypt’s Akila Galal is our oldest at 102. She’s pretty spry for someone her age. I see she’s waving off the mediwizard’s offer to help her into the arena. Galal didn’t participate in the 2016 Wizolympics, citing some kind of health scare, but she’s back at it now, and I can see her cracking her knuckles in anticipation. Here comes the kelpie. Where is Galal? She seems to have disappeared. There are murmurs in the crowd, and even the judges look disappointed, but – aha! Galal used a Disillusionment Charm to trick the kelpie so she could get a good Placement in. And with a quick twist and a hop from behind, Akila Galal is riding that kelpie all around the swamp, performing what looks like a nod to Muggle dressage with that impeccable form. The judges have awarded her an unheard-of perfect score! 50 points to Akila Galal from Egypt! 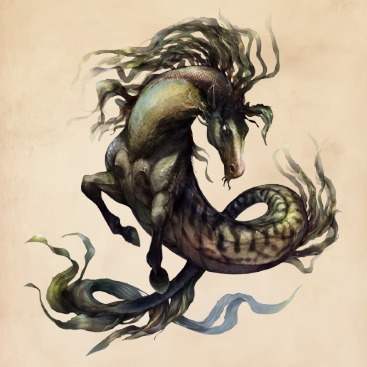 Next up we have Ava Brennan from Ireland, 2016’s reigning Galleon medal winner. Her Placement Charm is a little sloppy, but she manages to get the bridle on the kelpie okay. Can she mount it? Yes! Well done, Brennan. She does a quick loop of the arena and slips off the back just as her kelpie rears. The judges give her a cool 42 points.

Brennan is followed by Pablo Riquelme from Chile. He took home the Knut last time. Can he repeat the process? He seems to be doing a lot of splashing about as he climbs into the arena – I think he’s got caught on the fence. Oh, dear… The kelpie has noticed his presence. Doesn’t Riquelme see it creeping up on him? Turn around, Riquelme! Yikes. We have another contestant down, and the swamp is once again red with blood as the kelpie devours Pablo Riquelme, who has been disqualified.

Alex Thiry from Belgium is also disqualified after her unfortunate drowning, and Japan’s own Hitoshi Sasaki narrowly avoids the same fate. He makes it out of the arena, and the judges award him 22 points. Ana Dragomirova of Bulgaria, who dropped out of the competition in Brazil, is back, and she seems determined to make a name for herself. She gets her Placement Charm on okay and only loses one of her arms as she mounts the kelpie! Well done, Dragomirova! Do we have a mediwizard handy? Just staunch the bleeding. She’ll be fine. What do the judges have to say? 21 points for Dragomirova! It doesn’t look like she’ll place on the podium, but I’m sure she’ll remember this day for a long time. 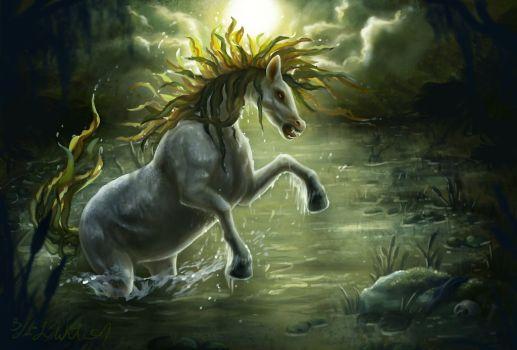 The kelpie has been wrangled back into its cage, and a quick Vanishing Spell rids us of the swamp so we can present our champions with their medals. 102-year-old Akila Galal gets the Galleon for Egypt, Ava Brennan of Ireland takes home the Sickle, and Japan’s Hitoshi Sasaki is presented with the Knut.

That’s it for this year’s kelpie taming! An exciting event as always. We saw some real displays of talent in the swamp today. This has been Hiltrude Tuft for the Daily Prophet. Thank you for joining us.