A married scientist couple, Dr. Chris Hand and Dr. Joanne Ingram of Glasgow Caledonian University, put readers’ eye movements under their lense. Their purpose? To study how we comprehend novel words. Their method? Here’s where it gets fun. The behavioral psychologists are big Harry Potter fans. So they used texts from the magical books to conduct their research. What they found can actually be incredibly useful in the future of public distribution of information.

In the abstract of their complete study, Dr. Hand and Dr. Ingram summarize their methods. They divided their participants into Harry Potter fans and non-fans, who went into the experiment blind to the fact that it had anything to do with the book series. The respective groups were presented with two-sentence texts of three types: sentences from Harry Potter that contained made-up words such as “Quidditch,” “Muggle,” or “Hogwarts,” sentences with high-frequency words (words like “person,” which occur fairly frequently in everyday speech and in various contexts), and sentences with low-frequency words such as “robber” that don’t typically come up every day. When the participants were presented with the sentence pairs, they had to rely on the context to comprehend the target words while Dr. Hand and Dr. Ingram observed their eye movements.

Why Harry Potter? The psychologists admitted that they could have chosen other specialist texts, but Harry Potter was the closest to their hearts, even if it meant they were hard-pressed to find participants. “It’s hard to get people who have never had any contact with Harry Potter – it’s a bit like Star Wars and Lord of the Rings,” Dr. Hand told the Herald. “Most of the fans had read all the books multiple times and seen all the films. One of the participants had read all the books at least four times.”

What have they found?

Unsurprisingly, those participants who had already read Harry Potter before entering the study had an easier time moving on from the jargon of the wizarding world compared to those who had not read any Potter books at all and had only seen a couple of the movies. When faced with new vocabulary, non-fans would read more slowly or their eye focus would wander back to the unfamiliar words even while they had already moved on to read the rest of the text.

The researchers found that context is the absolute key to understanding new words. This is true whenever we are faced with specialized terminology, be it medical, political, or economical, not just magical. As long as we are given what they referred to as “supportive context,” we get it just fine. The pitfall of getting the correct message across is an “unsupportive context” (i.e., not enough clues for the readers to have a chance at figuring out whether “Quidditch” is eaten, drank, or played). Remember Ron’s confusion at the mention of “Cinderella” in Harry Potter and the Deathly Hallows? Just give him some proper context and he’ll work it out, according to this study. 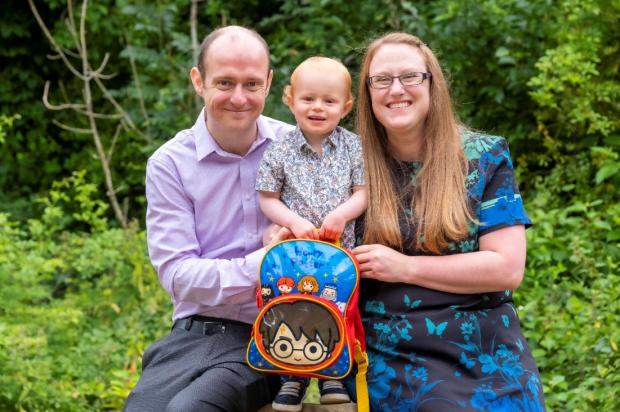 Dr. Chris Hand and Dr. Joanne Inram are pictured with son Eric and his “Harry Potter” backpack. (Credit: The Herald)

The implications of this research may be more far-reaching than it seems at first glance, especially in the age of COVID-19. Dr. Hand said, “The takeaway message is, with the right context, everyone can understand these really specialist terms. This is important research because it helps us understand how to communicate public health information.” That’s right – it doesn’t have to be about testing how quickly your non-fan friends learn wizarding lingo. Rather, it proves that we are more than capable of getting up to speed with novel vocabulary, provided there is helpful enough context. Dr. Hand makes his and Dr. Ingram’s findings crystal clear:

The message is that if you have a technical word, don’t dumb down language [–] use the proper word and context because we are showing that it actually makes it easier to understand if you’ve got the right contextual information. So for things like public health information, economics, politics, medicine, training, [or] education, and for GPs who are trying to communicate something to a patient, don’t just throw the word in without context or try to replace it with a simpler word.