Not that we need any help maintaining a sense of foreboding these days, but the spooky season has arrived, and Harry Potter: Wizards Unite and Harry Potter: Hogwarts Mystery are adjusting accordingly. The two Portkey Games titles are ushering in October with Snatchers, spiders, poachers, cabals, and jack-o’-lanterns galore, so dim the lights and get ready for some pumpkin spice-flavored fun, wizarding world gamers. Phones at the ready!

Wizards Unite wasted no time getting the witchy season underway with its October Wizarding Weekend, culminating at 11:00 a.m. PT today. You still have a few hours to finish collecting various Foundables from the Dark Arts Family before the first big happening begins tomorrow: Part 1 of the Darkness Rising Brilliant Event. 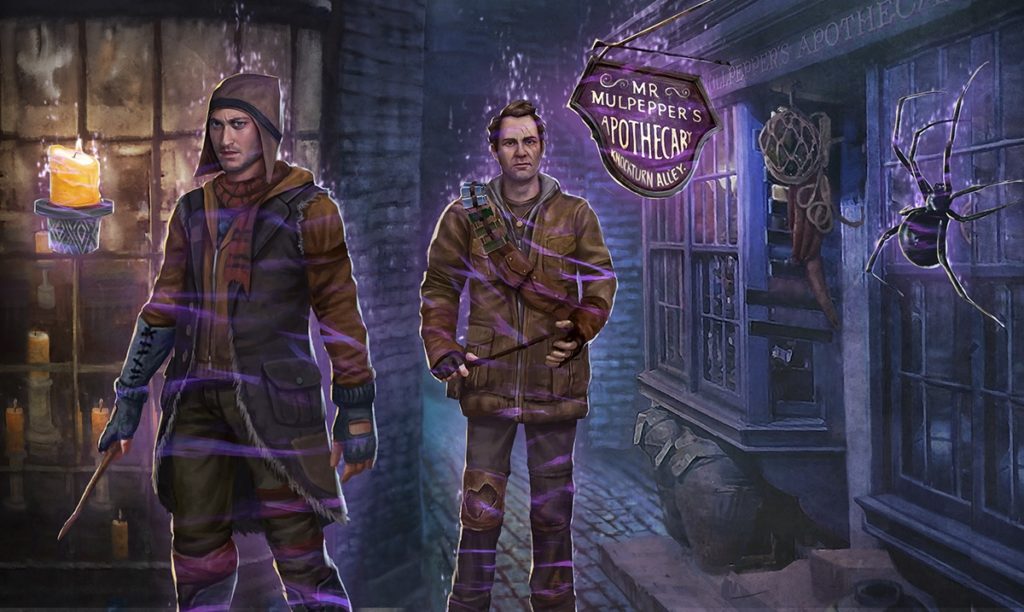 We'll be squaring off against two unscrupulous baddies of the wizarding world: dreaded Snatchers from the Second Wizarding War and poachers seeking to snare unsuspecting magical creatures. In the wild, be on the lookout for the Brilliant Snatcher and Brilliant Poacher. In lieu of squashing it with a giant shoe, you can log the Brilliant Giant Black Spider by completing event tasks. Unlock event-specific Portkeys to nab the Brilliant Mulpepper's Apothecary Sign, and complete Wizarding Challenges with event-specific runestones to complete your registry page with the Brilliant Poison Candle.

As for the remainder of the month, the September Makeup Community Day will be held from 12:01 a.m. to 11:59 p.m. in your local time zone on Saturday, October 7, and will focus on the Ministry Atrium Registry Page. During those same hours on Sunday, October 18, October's Community Day will focus once again on everyone's favorite pranksters with a visit to Weasleys' Wizard Wheezes.

Don't forget to pick up your free bundles in the Diagon Alley Shop during events, and have fun out there!

For once, quite a bit has happened in Hogwarts Mystery since our last update. We all squeezed a few last drops out of summer with the Festival Fun side quest, and it was just so tremendously awwww. Are we still irritated that we can't date Charlie Weasley? You bet your dragon-hide boots we are! But Talbott Winger is an acceptable substitute.

Enough of that mushy stuff, though. We've had a few new chapters to work through as well! At the prompting of Mad-Eye Moody, we set out on a course to infiltrate the dark wizard cabal "R" by using Polyjuice Potion to transform into the despicable Patricia Rakepick. So it was off to...

Hold up. Is that a member of "R" just hanging out at the Three Broomsticks? Wow. It seems we could've skipped the whole infiltrating thing and just eavesdropped over butterbeer, but oh well. Hindsight is 20/20.

Look, don't pester us with trivialities. This is a great plan! No way is she going to turn up and wreck it.

Okay, fine. Can we add "petrify her and take her to Azkaban" to the list? The Full Body-Bind Curse is grossly underutilized in the wizarding world. Anyway, down the hatch!

Now there's a rock band that would give the Weird Sisters a run for their money! Pat and the Cabal Crashers. And off we went to Knockturn Alley, where we were getting great intel until...

Ugh. We hate it when Talbott and Jacob are right. But Rakepick wasn't the only one to show up uninvited. Mad-Eye Moody and Jacob arrived to chase everyone off except that wizard from Mahoutokoro we had all completely forgotten about.

And we hear they're done dirt cheap too! We set to work interrogating the Mahoutokoro wizard but didn't get much information... other than the fact that "R" apparently wants us to sign up.

Would it be morally wrong to ask if we can date this guy? Just a thought.

So to recap: We waited a month for a Polyjuice Potion to brew just so we could spend two minutes in Knockturn Alley before the real Rakepick showed up and ultimately escaped again. And while we did manage to learn that "R" has a mole inside Hogwarts, the Circle of Khanna - after putting their keen and penetrating minds to the task - thinks it's either Argus Filch, Severus Snape, or Rolanda Hooch.

Our thoughts exactly. By the way, has anyone seen Alanza Alves lately? Just asking.

We'll have to see where this goes, but in the meantime, the game's lovely Halloween decorations have returned. Enjoy a few shots of them while we wait to see what other Halloween surprises Hogwarts Mystery has in store this year!

There's not much in the way of other gaming news this week. Some players are beginning to find their groove in Harry Potter: Puzzles & Spells, while others are still speculating about various aspects of Hogwarts Legacy. We'll get into some more of that next time as well, but until then, Warner Bros. Games has set up a Frequently Asked Questions page for Hogwarts Legacy that is already being regularly updated. If you're wondering about any basic aspects of the game, you'll likely find your answer there.