“Fantastic Beasts: The Wonder of Nature” Exhibition Opening in December in London

It was back in January that we learned of the forthcoming Fantastic Beasts: The Wonder of Nature exhibition, to be displayed at London’s Natural History Museum in partnership with Warner Bros. and BBC Studios. Originally planned with a spring opening, it was delayed for obvious reasons and is now set to debut on December 9, 2020, staying at the museum until August 2021.

Head into a world of fantastical creatures with a new exhibition from @NHM_London. Opening 9 December it will showcase creatures from Fantastic Beasts alongside some of earth’s most spellbinding animals.
Tickets on sale 12th November. #NHMFantasticBeasts https://t.co/HisFV8Cp28 pic.twitter.com/Nc8YgoLRdZ

Clare Matterson, executive director of engagement at the museum, explains the intersection between the magical and natural worlds present in the new exhibition.

[Visitors] will journey through magical realms and walk alongside some of the most fascinating creatures in the world. At the heart of this exhibition is a celebration of all the fantastic beasts we have the privilege of sharing our planet with, and the very real threats they face. Visitors will leave with a renewed love of the wonders of nature, and a revived urgency to help protect it.

Those who previously booked tickets but had them refunded when the exhibition was postponed will also get early access by email.

Meanwhile, the exhibition’s companion book, titled Fantastic Beasts: The Wonder of Nature: Amazing Animals and the Magical Creatures of Harry Potter and Fantastic Beasts, which was previously scheduled to be released in June, now has a November 26 release date and a beautiful cover image. Amazon.co.uk has the hardback edition available for preorder for £25 and the Kindle edition for £6.99, but the hardback is also currently 10% off on Bloomsbury’s website. 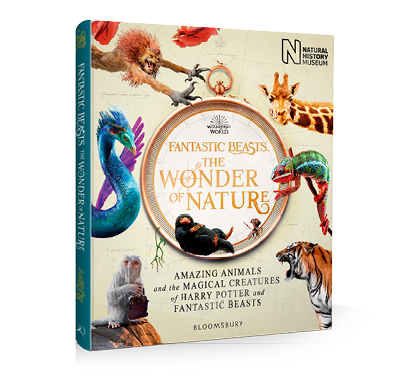 If you’re not in the United Kingdom, you will hopefully still get your chance to see Fantastic Beasts: The Wonder of Nature. The exhibition was originally expected to go on an international tour after its time in London. And while no further information about this has been given since the pandemic began, we still expect it will happen… eventually.