UPDATED: Have a Peek at the New LEGO Monster Book of Monsters

LEGO has been bringing plenty of magic and joy to Potterheads this year with exciting new sets, like the recently released Diagon Alley, and fans can also look forward to new sets that might feature House-specific classrooms. The latest addition, however, is pretty cool, and we can’t wait to get our hands on it.

If you live in Shanghai, China, you can consider yourself one lucky witch or wizard. The LEGOLAND Discovery Center in Shanghai is home to a magical new Harry Potter LEGO set. Head to Gringotts to withdraw your Galleons, and be one of the first to own 30628 Monster Book of Monsters. Like previous Harry Potter LEGO sets, it resembles the feisty magical book almost perfectly. 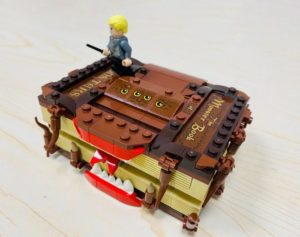 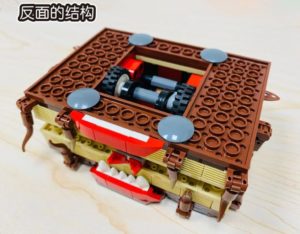 If you can’t wait to own this set, you should be aware that there is a catch: It will only be available as a gift-with-purchase, which means you’ll have to spend plenty of Galleons on other Harry Potter sets to get a hold of this one – 1,399 Chinese yuan (about $209), to be exact. This special offer runs from October 15 to November 15 at Shanghai’s LEGOLAND Discovery Center. Should the Monster Book of Monsters set make its way outside of China (which it hopefully will), it is assumed that the offer would remain the same and it would only be available as a gift-with-purchase.

It might not be ideal for some to have to spend money on other Harry Potter sets to get a hold of this one (especially if you already own all the sets), but the Monster Book of Monsters set is a pretty nifty gift to get – not only does it include a nonexclusive Draco Malfoy minifigure, but it also snaps its fangs as seen in Harry Potter and the Prisoner of Azkaban. To activate this feature, simply push the book along a flat surface, like your desk or table, and watch its snapping feature activate. Pretty cool for a LEGO book, right?

We’re really hoping that this cool new set makes it out of China soon. As of right now, the number of parts for 30628 Monster Book of Monsters has not yet been confirmed, nor is there any news on when it might be available outside of China. We’ll keep you updated as we know more.

We have now learned that LEGO has added the 30628 Monster Book of Monsters set and its building instructions to its official site, thanks to an update from Brick Fanatics. While we don’t know for sure, this seems like a good sign that the set could be released outside of China soon, especially since the set has reportedly shown up at the LEGOLAND Discovery Center in Atlanta, Georgia. One Instagram user was able to purchase the set for $20, although Brick Fanatics notes that the product number suggests that this particular set might be included as a gift with a purchase over a certain amount in the future.

Are you excited about this new set? Let us know in the comments.