After the new rule book for the 2020–2021 season was released, the International Quidditch Association (IQA) announced changes to the referee certification in Muggle quidditch. The IQA also introduced its new referee training.

We will be moving from our previously used testing-is-training system to a resource-based training system, which integrates into the changes to the testing system. 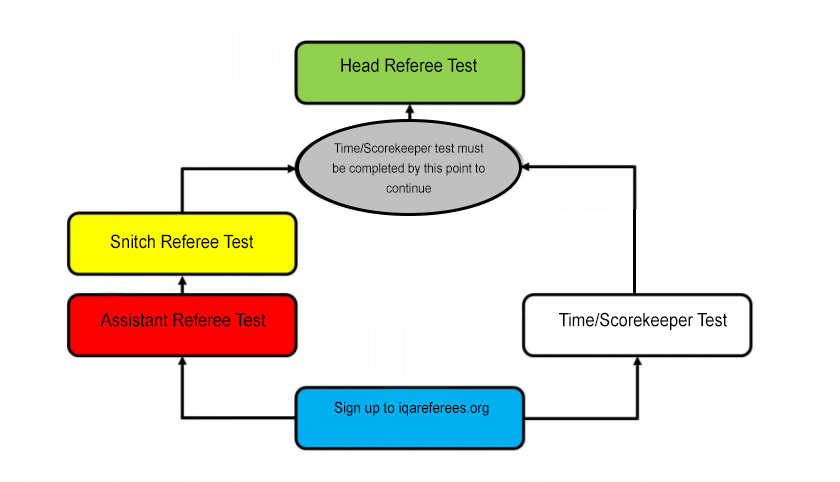 A diagram illustrates the paths to the different IQA referee certifications.

The IQA will host livestream training on the IQA YouTube channel. The IQA staff want to make between six and twelve resource presentation videos and then provide a livestream after a week for any questions people have about the presented material. Although the videos will be in English, IQA translators will work on captions and subtitles for as many languages as possible. The referee certification test is already translated into French, Catalan, and Spanish.

The IQA training sessions are not mandatory for referees, but attending them will have benefits. Referees who watch at least half of the resource presentation videos will be eligible to take the recertification test in the next rule book season. The IQA will keep track of which referees have watched at least half of the videos through a random code in every resource presentation. Each referee will have 28 days to enter the code into the IQA Match Official Training Registration Form. Referees who do not attend the IQA training will have to take the initial certification tests next season.

What do you think of the IQA’s changes to referee certification? Tell us in the comments below!