The International Quidditch Association (IQA) releases a new rule book every two years. In August, the IQA started by releasing a changelog presenting upcoming changes to the rules of Muggle quidditch. These changes were confirmed in the new official IQA rule book, released on October 13.

As previously announced, there are three major changes in the changelog. One of them, on repositioning the quaffle carrier when restarting play, didn’t appear in the new rule book. Other changes related to overtime after catching the snitch and to the starting lineup were added to the rule book. The new rule book has also introduced new terms, such as “starting sideline,” “starting runner zone,” and “quaffle runner starting line.” 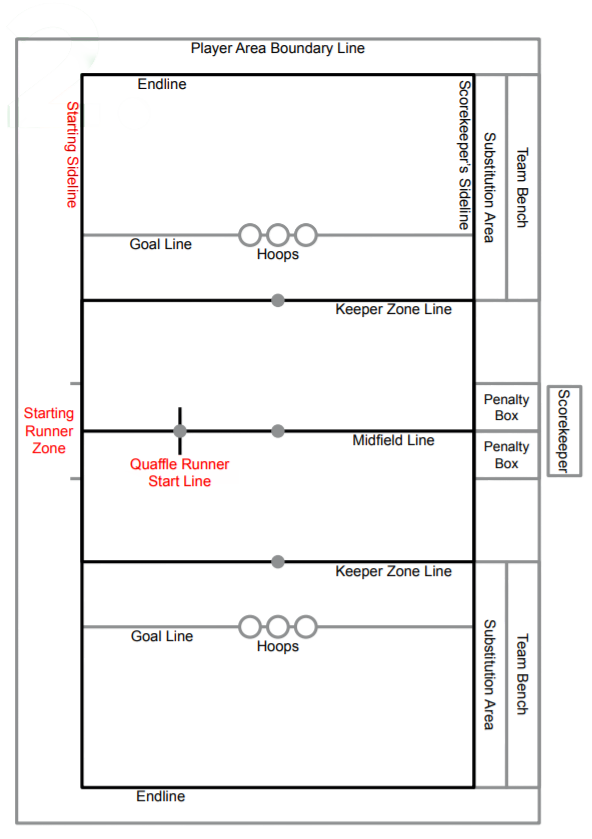 Almost every player will begin play on the starting sideline, with the exception of two chasers. Those two players will start in the starting runner zone on the quaffle runner starting line, as shown in the diagram. (Source: IQA)

Minor changes also appeared in the new rule book. Austin Wallace, Interim Gameplay Director at the IQA, is excited about these new changes.

We are extremely excited for this [r]ulebook, which I believe improves quidditch by addressing some of the sport’s biggest gameplay and safety issues. I would like to especially thank Michael Clark-Polner and the Rulebook Committee for their months of work vetting, debating, and crafting this rulebook. I am very happy with their work and process, and how they listened to the community; one of the biggest changes – the starting procedure – came directly from a community form suggestion, via Christos Kaldis, and I look forward to even more community engagement in the future.

Meanwhile, US Quidditch (USQ) released USQ Rulebook 14 on October 5. The changes are similar to those in IQA Rulebook 2020, and USQ worked together with the IQA on the new starting line procedure.

According to USQ rules, the difference is in the ending of a game. The game is played as usual until the 20th minute of game time. After that, the head referee has to stop play for an intermission. The intermission is two minutes long, and the head referee has to announce a point cap of the current leading score plus 70. The snitch should also enter the player area. Then, play will resume as usual, and the seekers will try to catch the snitch. The game will end when either the snitch is caught or one team reaches the point cap, whichever comes first.

This is different from the IQA rule book, where the target score (the IQA-equivalent term for the point cap) is always plus 30 points, although both are implemented only during overtime. Additionally, the new IQA rules forbid seekers to be defensive, but this is still allowed in the United States.

There are also many other minor changes. For example, a player who is knocked out and wishes to remount their broom must touch the center hoop instead of any of their own hoops. Two-armed contact is also allowed during stealing and wrapping.

What do you think of these new changes? Tell us your thoughts in the comments below!