Not only has the International Quidditch Association (IQA) changed the process for referee certification in Muggle quidditch, but US Quidditch (USQ) has made a few adjustments for this next season as well. The certification tests for referees and snitch runners for the 2020–2021 season are now available.

There is a difference between the processes of referee certification for the IQA and for USQ, because USQ has higher demands. USQ has used a four-tier system for head referees since 2017. Every new head referee has to pass a field test and will start at Tier 4 after that. If a head referee wants to move up a tier, they have to pass another field test with a proctor of the same tier or higher. There is a mandatory tier demotion for every head referee annually in May. Additional tier demotion might happen if a head referee doesn’t fill the required number of refereed games for a specific tier or if a referee gets poor reviews.

That is how it works usually, but not this year. USQ has announced that there won’t be any mandatory tier demotions at the end of the 2019–2020 season. Head referees have to pass one field test and head-referee one match in the 2019–2020 season or the 2020–2021 season. A head referee who has met that criteria will not be demoted in May 2021. 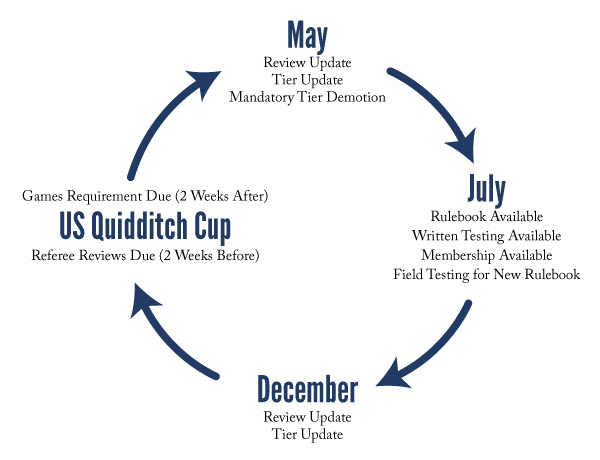 The referee’s tier can change twice per year, in December and May.

Snitch runners have similar requirements, but they have five tiers. A prospective snitch runner has to pass the assistant referee certification test and snitch rules test and upgrade USQ memberships. After that, they become a certified snitch runner at Tier 5. If a snitch runner wants to have a higher tier, they have to submit a video of themselves as the snitch runner during a game or attend an in-person field test with a snitch proctor. There are no mandatory tier demotions for snitch runners at the end of the season.

USQ has not announced any special adjustments for snitch runners for the 2019–2020 or 2020–2021 seasons yet. The USQ snitch team plans to share more information and resources about field testing in the next few months. 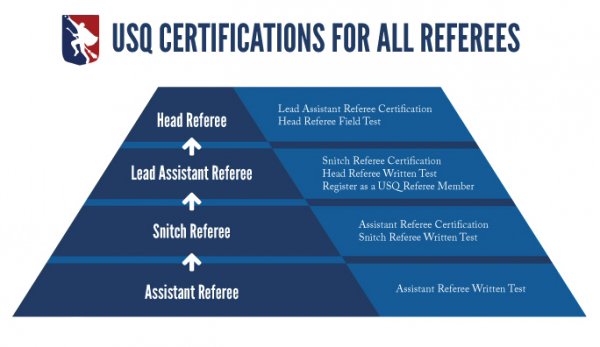 While it is new for the IQA, USQ has long required its snitch referees to get assistant referee certification first.

These requirements for head referees and snitch runners aren’t mandatory for every match, only for those organized by USQ, which will be US Quidditch Cup 14 and the spring regional championships in the 2020–2021 season. Every team that wishes to compete at either event has to complete the referee requirements by two weeks from the date of the event. That means that a team has to have two lead assistant referees, one snitch runner, and three assistant referees. Additionally, teams that wish to be official member teams without attending a USQ-hosted event have to complete the requirements “by one month after [the] team registers for the season or one week before any official games (whichever is later).”