We couldn’t be more ready to finally kick 2020 to the curb, but before we do, we can at least enjoy the subtler joys of the holiday season. Large family gatherings are out, but so are arguments between your uncles over politics! We should definitely be avoiding parties, but that means we also get to avoid making polite chitchat with people we don’t really know and avoiding the snacks after somebody inevitably double-dips! Even in the darkest of times and all that, we can always enjoy plenty of isolated fun on our phones, thanks to Harry Potter: Wizards Unite and Harry Potter: Hogwarts Mystery! Happy Christmas, wizarding world gamers. Phones at the ready!

Who hasn't imagined at least once or twice what it might be like to spend Christmas at Hogwarts? The real appeal is the thought of having the castle nearly all to yourself, and the moving staircases would definitely be a sight to behold when devoid of scurrying students. Perhaps the portraits would be chatting to one another about holidays long past, interrupted periodically by a passing ghost or a meow from Mrs. Norris.

Those images will serve as the focus of Part 2 of this month's Brilliant Event: Hogwarts for the Holidays. 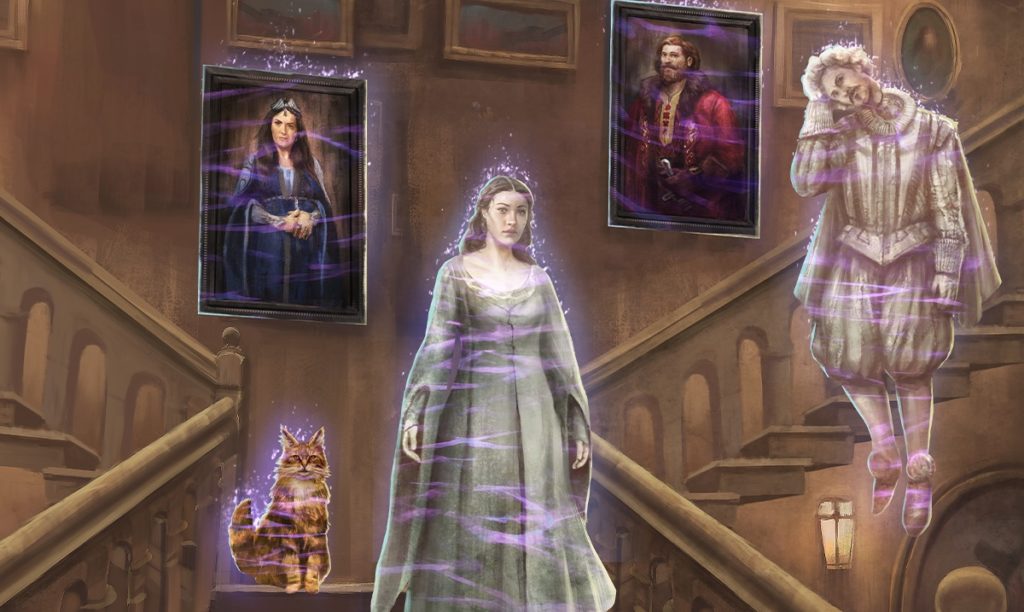 This week-long Brilliant Event gets underway at 11:00 a.m. PT today and will conclude at the same time on Tuesday, December 29. Of note is the fact that unlocking Portkey Portmanteaus is mercifully absent from this event, though you will need to complete the bonus assignment in order to pick up those missing Foundables. You should also still consider unlocking those Brilliant Portmanteaus when you can since two different Portkeys will be linking to two new locations: The Silver Portkey will transport you to the Ravenclaw common room and the Purple Portkey to the Gryffindor common room.

As for the Foundables you'll be seeking, pick up the Brilliant Rowena Ravenclaw Portrait and Brilliant Godric Gryffindor Portrait in the wild, complete Wizarding Challenges using event-specific runestones to add Brilliant Mrs. Norris, and complete your registry page with the Brilliant Grey Lady and Brilliant Nearly Headless Nick via either Portkeys or the bonus assignment.

One final event also remains on the December calendar: the 12 Tasks of Christmas, set to run from 11:00 a.m. PT on Tuesday, December 29, until 11:00 a.m. PT on Thursday, January 7. No specifics are yet available for this one, but we've been told by the developers to expect "exciting tasks and rewards as you celebrate the holidays at Hogwarts!" 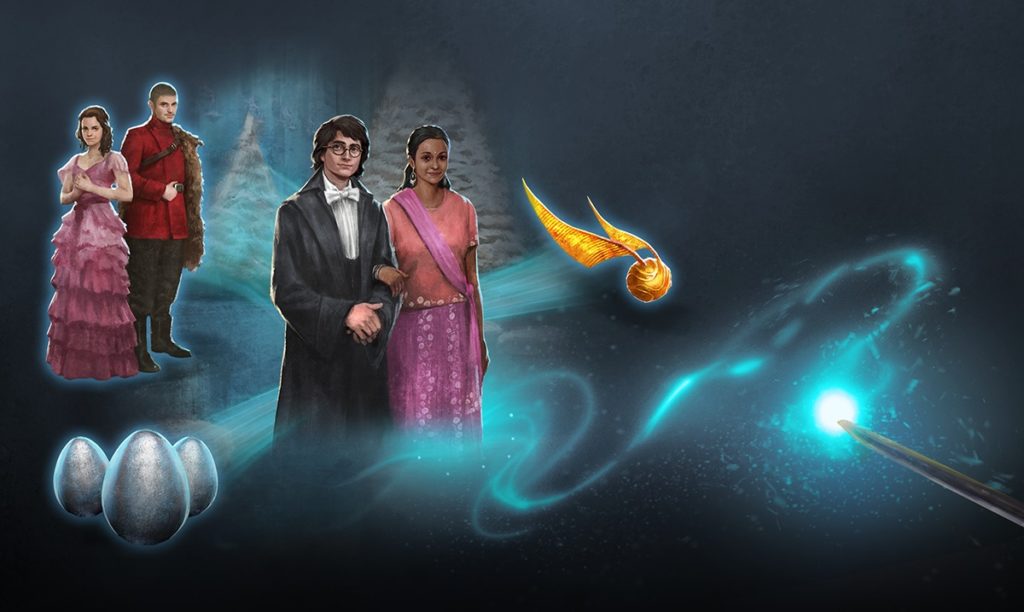 We'll be back next time to talk more about the recently added Adversaries feature and what's in store for January 2021!

Raise your hand if you want Hogsmeade to remain a permanent nighttime scene! Sorry - we're having trouble containing our enthusiasm in the face of the return of Hogwarts Mystery's gorgeous-as-always Christmas decorations. Though it is still a bit odd to find the Black Lake, Magical Creatures Reserve, and Quidditch Stadium snowless, most other locales are sporting their lovely holiday finery.

In addition, Jam City is in the midst of a Christmas Countdown that is yielding not only fabulous in-game prizes but opportunities to win tangible prizes as well!

Notebooks, decor, coins, energy, Christmas sweaters, and more are on offer in-game, and we're also winding down a holiday side quest that's found us tending to a tree-trimming-challenged Charlie Weasley and a blancmange-nostalgic Severus Snape.

While we definitely think remaining at Hogwarts for Christmas would be fun, does anyone else find it odd that so many of these kids' families are just cool with that? Our grandmothers are fit to be tied over the fact that we're just going to be dropping off presents and waving from a safe distance this Christmas; we can't imagine what they'd be doing if we told them we'd rather hang out at school.

Anyway, more on that and the story line next time. Be sure to keep logging into the game to secure your special surprises, and in the meantime, try your luck at winning one of five $100 cash gift cards Jam City is giving away. Visit the game's Instagram account to enter. The current sweepstakes entry period closes at 11:59 p.m. PT today. The second entry period will begin at 6:00 a.m. PT on Thursday, December 24, and close at 11:59 p.m. PT on Saturday, December 26.

WHAT: Beginning December 18, the Harry Potter: Hogwarts Mystery Christmas Countdown kicks off for an eight-day extravaganza. This cheerful campaign will treat fans to social media giveaways and in-game prizes such as notebooks, Christmas sweaters and decor, as well as coins and energy. Players will also be able to enjoy Quidditch, House Pride and Duelling events.

In a new time-limited sidequest, players who have progressed to Year 3 Chapter 4 find that their hopes to relax at Hogwarts during the holiday break don’t go according to plan after Charlie Weasley is injured and enlists your help to repay a debt. Along with discovering Professor Snape’s plans for the break, Hagrid and Charlie help create a unique Boxing Day surprise.

Harry Potter: Hogwarts Mystery is the only mobile game where any fan can live their fantasy of attending Hogwarts School of Witchcraft and Wizardry. In this award-winning narrative RPG ([r]ole[-p]laying [g]ame), players participate in the iconic rites of passage of life at the school, from being [S]orted in Year 1 to becoming a prefect in Year 5, while exploring the secrets of Hogwarts and its grounds. True to life in the wizarding world, players advance through their seven years of schooling at Hogwarts, attending classes, learning magical skills, and forming friendships and rivalries with other students while investigating an original, unfolding mystery.

For more details on Harry Potter: Hogwarts Mystery and to connect with other fans, visit www.facebook.com/HPHogwartsMystery/, www.twitter.com/HogwartsMystery, [and] https://www.instagram.com/hphogwartsmystery, and for more
information, visit www.HarryPotterHogwartsMystery.com/.