The interview touches on his latest movie, Baby Done, which explores the transition into parenthood. Lewis plays a dad-to-be alongside his on-screen girlfriend, Zoe (Rose Matafeo).

From Baby Done to Lewis’s time on Harry Potter and his love for The Lord of the Rings, we’ve compiled a list of fun facts taken from his interview.

Matthew’s wife used to work at Universal Studios Florida as an event planner.

Matthew lives in Florida with his wife, where he is “sort of just staying in my house” because there are “absolutely no COVID regulations.”

His wife is Floridian, and they met at an event Lewis attended at the Wizarding World of Harry Potter at Universal Orlando Resort. They stayed in touch afterward and eventually got married.

Being on the Harry Potter set was a fun experience.

It is well-known that James and Oliver Phelps were on-set pranksters, and Lewis said that Rupert Grint, the Phelps’ on-screen younger brother, is also a funny person to be around.

Rupert Grint is naturally very, very funny. He just has incredible comic timing, incredible facial expressions and even his body language – everything! He has funny bones. 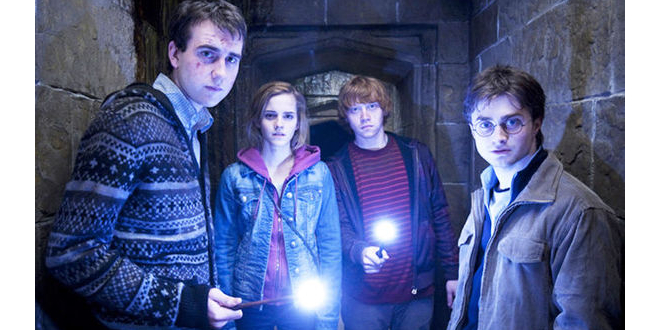 Neville Longbottom is clumsy, timid, and forgetful, described in the books as “round-faced” (SS, ch. 6). After a break between the second and third films, Matthew was asked to wear fat padding and false teeth.

It was a slightly longer break than normal… and when I came back, I was much taller than everyone else and I guess, thinner than I had been.

Producer David Heyman assures me it was never a discussion about recasting, but they had to do something.

So they tried stuffing my cheeks with cotton wool, which was disgusting; then they cut these bits of sponge from creature effects and put them in there.

He also had to wear “shoes that were two sizes too big” and “plastic behind the ears to make them stick forward.” 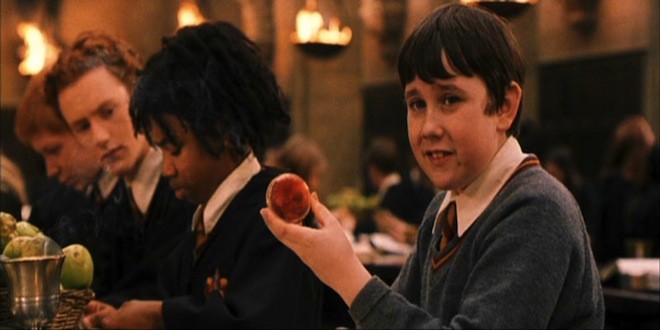 Neville Longbottom is shown holding his Remembrall in “Harry Potter and the Sorcerer’s Stone.”

Matthew is a huge Lord of the Rings fan.

Like the Lord of the Rings trilogy, Lewis’s film Baby Done was also filmed in New Zealand. Lewis admitted to forcing his wife to watch the trilogy during the first lockdown and discussed which Lord of the Rings character he thinks he would be.

I would obviously like to be Boromir. I’m from Yorkshire, so how could you not want to be Sean Bean, king of the north? But I would probably be Pippin, who is just a clumsy idiot and throughout the film is basically an annoyance who doesn’t do as he is told.

He is the smartest man I know and so humble. We’ve really hit it off again, and we have been chatting quite a bit the last few months. We hadn’t spoken for a long time because he was exceptionally busy being very famous out in California. 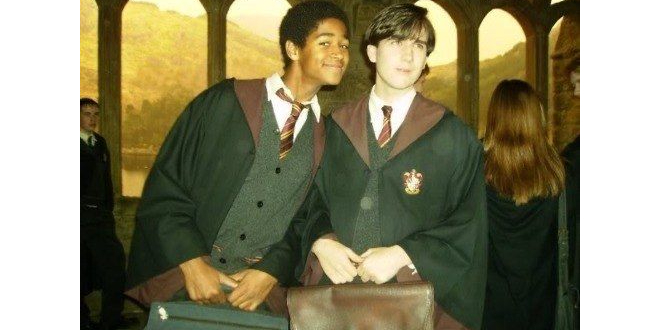 Matthew Lewis and Alfred Enoch on the set of “Harry Potter”

He’s happy being a dog parent for now.

When asked if filming Baby Done made him broody, Lewis said, “No… it reinforced my preconceived opinions.”

Lewis’s dogs, Nelly and Luke, are a “handful,” and since his job requires a lot of traveling, having family nearby makes it easier because they can leave the dogs with them. Right now, however, having children isn’t in the cards for Lewis.

So doing this movie and seeing all of the things that come with having kids, I am like, having a baby is brilliant, beautiful and amazing to do – one day. I am just absolutely not there yet.

Baby Done is available to watch on YouTube, Google Play, and Amazon Prime, and you can watch the trailer below.