Happy birthday, Severus Snape! We all know him as a deeply flawed character – one who still stirs up heated debate among readers 13 years after the close of the book series.

Book 7 may have ended the “great Snape debate” on his loyalties, but the current controversy has shifted to how fans react to and interpret him. What should we make of his feelings for Lily? How do we reconcile the good and bad things he’s done and the reasons he might have had for doing them? Can we even reconcile them – and does it matter? We may never have a collective answer.

Love him or hate him, people tend to call out his bullying behavior and (selfish?) attachment to Lily as his most obvious faults. It’s easy to see why, given their prevalence in the series. But I wanted to take a closer look at the flaws that we don’t discuss quite as often because they add so much more nuance to the man we love to hate. 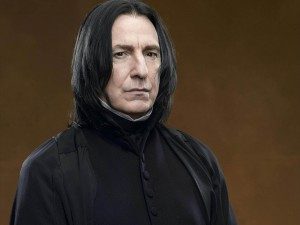 Maybe you can’t picture him color-coding his planner or having failure as his boggart like Hermione, but that doesn’t mean Snape isn’t also a raging perfectionist.

To his credit, he has plenty of good reasons for being one. His Slytherin ambition doesn’t leave much room for mediocrity; shoddy spellwork or an imperfectly brewed potion could hurt someone; one tiny behavioral slip-up or a crack in his Occlumency could lead to a nasty death and compromise the Order’s efforts… Many of the roles he plays don’t allow much room for error on his part. Aiming high isn’t inherently bad either. Lists of the highest achievers and greatest success stories, whether in the wizarding world or our own, are invariably full of people with perfectionistic streaks.

On the downside – because there always is a steep downside to perfectionism – Snape allows it to consume him. He’s immensely impatient and unforgiving, which aren’t great qualities to begin with, but they’re especially out of place in a teacher. It affects all his relationships with other people: He doesn’t tolerate imperfection in himself, and so he can’t tolerate imperfection in others (rather humorously in Lockhart’s case; less so in his treatment of Neville).

Unfortunately for Snape, no one is perfect, and he’s certainly no exception. And like most perfectionists, he clearly knows this. But rather than find a healthier way of managing his expectations, he clings to the perfectionism that feeds his unbearable attitude toward others – and it likely makes him pretty miserable too. That’s a significant flaw if I’ve ever seen one. 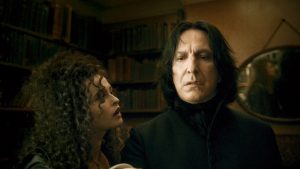 With all due respect to the late, great Alan Rickman’s iconic performance – he was not the Snape we see in the books. If you haven’t read through them recently, it’s easy to forget that Snape isn’t a slow-spoken, deadpanning sass-master. Rather, he’s incredibly emotionally volatile and not all that shy about showing it.

Even outside of “The Prince’s Tale” – which is arguably a better gauge of his personality than the scenes limited by his role as a teacher and his interactions with Harry – Snape is far from stoic. He may be cold and inscrutable at times, but he also snarls and shouts. He smiles, however unpleasantly. He sulks and snaps. He openly makes nasty faces at people who upset him, and he visibly worries when he believes he’s away from student eyes. On several memorable occasions, he absolutely loses his cool (apparently along with his ability to care he’s doing so) and rages and screams. He’s one of the few characters to go caps lock mode multiple times in the series, in fact.

While displaying emotions isn’t bad in itself, it’s hardly a secret that being ruled by them often leads to bad decisions. Joining the Death Eaters out of a desire for power or belonging is definitely one of them. Snape’s eventual defection to Dumbledore and vow to protect Harry are spurred by his own guilt, fear, and grief. But his emotions not only play a key role in his pivotal decisions – they also govern his day-to-day choices. Snape is nothing if not reactionary: When he’s upset, people know it (usually because they’re the target of his vicious comments).

Obviously, the Snape who interacts with Voldemort has things more under control for necessity’s sake. Given what he says about how Occlumency works, we know he can at least temporarily put a lock on his true feelings and make difficult decisions despite them. But for someone who lectures Harry about the dangers of wearing hearts on sleeves, Snape sure does quite a bit of it himself.

He wouldn’t be Severus Snape if there were only two flaws complicating his character – so watch for the next article in this series looking at his lesser-discussed shades of gray. Which do you find most humanizing, and which do you think is most inexcusable? Let us know in the comments.