For a while now, we’ve been keeping an eye on the upcoming Alan McGee biopic Creation Stories, and we finally have some major news to report: There’s a release date! Well, there’s a release date for home cinema in the United Kingdom, anyway… We’re still waiting to see when it will head across the pond and whether or not there will be an accompanying theater debut. Three Wizarding World alumni are attached to this project, so read on for that information and more in this week’s Casting News! Castium Revelio!

Creation Stories, a biopic about the infamous Creation Records boss Alan McGee, which we last updated you on in October 2020, has had its rights acquired by UK broadcaster Sky, Deadline Hollywood reports. Scottish novelist and playwright Irvine Welsh – who notably penned Trainspotting – is behind the script, and fittingly, Ewen Bremner (Spud in Trainspotting) is starring as McGee. The film is directed by Nick Moran (Scabior) and features Jason Isaacs (Lucius Malfoy) in a still-unnamed role and James Payton (Frank Longbottom) as former British prime minister Tony Blair. It also features music from some of Creation’s top artists, including Oasis, Primal Scream, the Boo Radleys, and the Jesus and Mary Chain. Moran calls the film “a modern-day fable” in comments released by Metro Films International.

It’s part cautionary tale, part cavalier romp, mostly hilarious, occasionally sobering, and constantly engaging. An irresistible trip down memory lane, or a delightful history lesson about the last great days of rock ‘n’ roll. When Britannia ruled the airwaves, thanks to one man with his misfit mates and their indie record label that briefly changed history. It is shamelessly entertaining and I hope a joy for everyone!

Sky has announced plans to release the film on March 20 via Sky Cinema, and it will make its premiere on February 24 at the virtual Glasgow Film Festival. No release date for United States markets has yet been announced, but we’ll keep you posted! You can view the lone still photo available from the film, featuring Bremner as McGee, below. 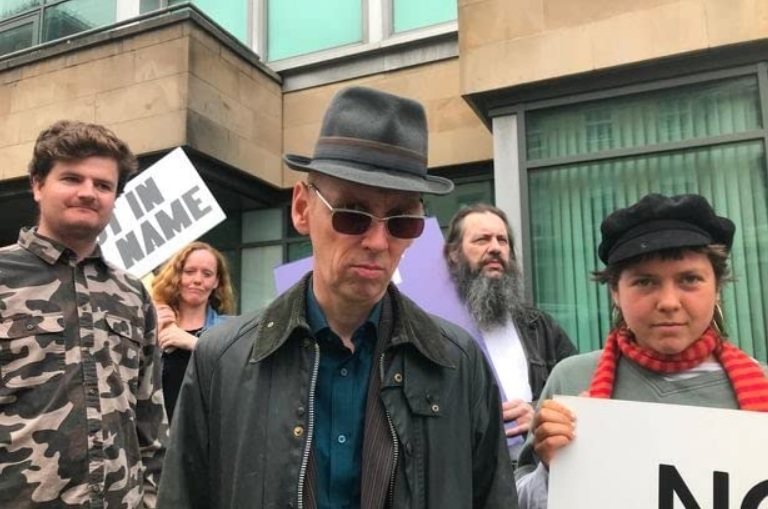 Despite having gotten a jump on the rest of the world in terms of vaccinating its population, the UK continues to struggle with the spread of a more infectious strain of COVID-19. As such, support is still pouring in for the National Health Service (NHS). Some famous faces teamed up recently to create a comedy skit inspired by YouTube’s popular Boss Bitch Fight Challenge and titled “Keep Fighting for the NHS.” Dame Emma Thompson (Sybill Trelawney) is typically front and center when a good cause needs a boost, and she’s featured in the video along with Olivia Colman, Kathryn Drysdale, Rita Ora, and Gemma Arterton, among others. You can check out the video below, and if you’re able, consider a donation to NHS Charities Together.

The season of little gold trophies is upon us once more, and the nominees have been announced for the 2021 Writers Guild Awards. Up for consideration in the Drama Series category is The Crown, which last year featured Helena Bonham Carter (Bellatrix Lestrange) in her final turn as Princess Margaret. Meanwhile, Netflix’s breakout hit The Queen’s Gambit – the show that made chess cool again – is nominated in the Adapted Long Form category. That series features Harry Melling (Dudley Dursley) in the role of Harry Beltik. The awards ceremony is set for March 21; best of luck to our Wizarding World alumni!

Lastly, Samantha Morton (Mary Lou Barebone) appeared last week on an episode of BBC panel show Would I Lie to You?, which features teams attempting to guess which of their opponents’ answers are true and which are lies during a series of quiz rounds. Her anecdote was “When Tom Cruise came to England, I took him to Argos because he wanted to buy an extension lead.” Morton and Cruise did star together in 2002’s Minority Report, but the story turned out to be a lie. She obviously took him there to stock up on Harry Potter merch instead. Just a joke. They didn’t go at all.

That does it for this week’s edition of MuggleNet’s Casting News! Check back next week for more updates on your Wizarding World favorites, and let us know in the comments if there are any projects you’d like to see us cover.