Starting on February 16, players of Hogwarts Mystery will be able to go on dates and experience romance whenever they like because the feature is being permanently added to the game, and in a limited-time update, players of Puzzles & Spells can win rewards by collecting Love Potion vials to help Lavender Brown find her Won-Won. 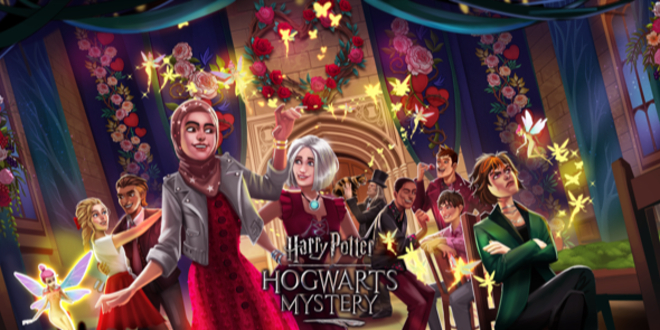 “Harry Potter: Hogwarts Mystery” has made the dating and romance feature permanent.

Romance was first introduced to Hogwarts Mystery in 2019 during the special Celestial Ball event, where players in their fourth year or higher could invite their dates to the ball.

Since then, players have had three other opportunities to immerse themselves into in-game romance. With players going on a total of 2.9 million dates, the romance feature has been the most requested update from fans.

Our players are so deeply invested and immersed in their actions within the game that we’re not at all surprised just how well this social feature has performed. We’re constantly interacting with our player base and receive countless emails and messages from them asking to make dating a permanent feature, so we just had to deliver!

In addition to this exciting permanent update, a time-limited Valentine’s Day event has also been added to the game. It allows players who have reached Year 5, Chapter 9 to participate in a quest to save the Valentine’s Day dance that is at risk of being “the most boring event of the year with no food or decorations” because Madam Pince has been asked to organize it.

In addition to meeting a new love interest in Hogwarts Mystery, you can also have Valentine’s Day fun in the award-nominated Harry Potter: Puzzles & Spells.

For the game’s first Valentine’s Day, a limited-time Amortentia Adoration event is taking place. Named after the wizarding world’s powerful love potion, the event involves a lovesick Lavender Brown on the search for “Won-Won,” and if players collect enough Love Potion vials in the match-three puzzles, they will win a reward.

Lavender Brown reminds us that love is in the air, “Where is my Won-Won”? Participate in #AmortentiaAdoration by collecting Love Potions on gems in Player Journey puzzles.

Are you excited to have some Valentine’s Day fun in Puzzles & Spells, and are you looking forward to the new romance update in Hogwarts Mystery? You can watch the trailer for the new update to Hogwarts Mystery below.

Culver City, Calif. - February 11, 2021 - Love is in the air...and it’s here to stay. Jam City, a leading mobile entertainment studio, along with Portkey Games, a label from Warner Bros. Interactive Entertainment, today announced the highly anticipated feature update to the No. 1 most[-]downloaded mobile game at launch, Harry Potter: Hogwarts Mystery. Beginning February 16, players will now be able to go on dates whenever they please and experience romance permanently in the game.

First introduced in 2019 during a special in-game Celestial Ball event, the element of romance has since appeared on four different occasions and was consistently met with resounding enthusiasm, as players have opted to go on a total of 2.9 million dates with an original character of their choice. The romance feature is the number one most[-]requested update by fans.

“Our players are so deeply invested and immersed in their actions within the game that we’re not at all surprised just how well this social feature has performed,” says Sarah Wolf, Game Director at Jam City. “We’re constantly interacting with our player base and receive countless emails and messages from them asking to make dating a permanent feature, so we just had to deliver!”

As part of this update, the romance feature will now include “relationship levels” driven by points earned through gameplay. Once enough points have been accrued, players will advance through various “relationship milestones” that trigger subsequent side quests and activities. New and exciting date locations will unlock based on relationship levels. And as so in real life, players also have the ability to go “exclusive” with their love interest, or “break up” if they aren’t feeling the sparks.

In addition to the dating feature rollout, beginning today, players who have progressed to Year 5, Chapter 9 can experience a Valentine’s Day-themed time-limited side quest event sure to tug at the heartstrings. Students of Hogwarts are thrilled when Professor Dumbledore announces a big Valentine’s Day dance. However, under the organization of Madam Pince, the dance is at risk of being the most boring event of the year with no food or decorations! It is up to the players to make this dance a memorable night for everyone, and to perhaps plant a seed of love between Madam Pince and Mr. Filch.

Harry Potter: Hogwarts Mystery is the only mobile game where any fan can live their fantasy of attending Hogwarts School of Witchcraft and Wizardry. In this award-winning narrative RPG ([r]ole[-p]laying [g]ame), players participate in the iconic rites of passage of life at the school, from being [S]orted in Year 1 to becoming a prefect in Year 5, while exploring the secrets of Hogwarts and its grounds. True to life in the [w]izarding [w]orld, players advance through their seven years of schooling at Hogwarts, attending classes, learning magical skills, and forming friendships and rivalries with other students, while investigating an original, unfolding mystery.

For more details on Harry Potter: Hogwarts Mystery and to connect with other fans, visit us on Facebook, Twitter and Instagram, and for more information visit: www.HarryPotterHogwartsMystery.com/.