Father and Son Construct a Hogwarts Castle Made Out of Sweets

Gingerbread houses first originated in Germany as a Christmas tradition after the well-known Brothers Grimm fairy tale Hansel and Gretel. However, these cutesy creations are not just for the holiday season anymore. Father and son Douglas and Grant Miller in New Baden, Illinois, have made a tradition of their own to construct sweet treat models – this year a 4-foot-long and 18-inch-tall Hogwarts Castle. 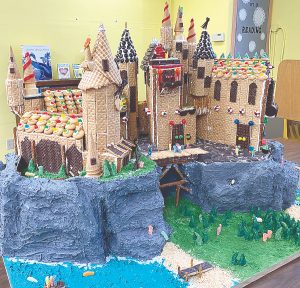 Grant Miller, a 17-year-old senior at Wesclin High School, explained the construction of the castle took eight days, starting with a base completely made out of Styrofoam. Grant, who has always been artistic from a young age with LEGO sets, also explained that this was more about the project than it was about Harry Potter.

I’m not exactly a die[-]hard Harry Potter fan. It was just an idea. Each year, my dad and I design a giant gingerbread project. One year it was a huge ship based on Pirates of the Caribbean.

Much like other renditions of Hogwarts Castle, the construction was modeled to look just like the Hogwarts we know in the Harry Potter films. The castle, primarily built of graham crackers, is set on a cliff overlooking a lake with a chocolate boat. The bridge just next to the Great Hall is constructed of pretzel rods, chocolate bars, and graham crackers. Chocolate wafer windows are set in various parts of the castle. Ice cream cone turrets and Sour Patch Kid gummies (the latter standing in for Hogwarts students) can also be seen. In fact, a Sour Patch Kid gummy can be found on a pretzel broomstick atop a turret. It is clear that a lot of thought went into the making of this magical model. The joy is in the details of vanilla wafer roof shingles, licorice swirls, chocolate bars, and gumdrops.

This Hogwarts model is on display at the New Baden Library for the foreseeable future. Herald Publications noted that the giant castle wouldn’t have made it inside the building if the double doors had a divider.

Have you made any Harry Potter-themed sweet treat models? Comment below.