The Lanarkshire-born actor has previously shown his support for other Scottish projects, including bringing the only surviving Clyde-built turbine steamer back to Glasgow and supporting his old school, the Glasgow School of Art. Coltrane has said that he is “absolutely delighted to hear about the new Filmhouse plans.”

The home of the Edinburgh International Film Festival, Filmhouse is a leading independent movie theater that celebrates “world cinema in all its brilliance and diversity.”

Filmhouse currently resides in a former church that was transformed into a 90-seat auditorium and opened to the public in 1978. Two more auditoriums were added in 1985 and 1997. Filmhouse shows around 700 films and events every year, and its proposed new home could provide even more opportunities for the company.

The plans include a nine-story complex designed by Richard Murphy Architects that will be situated right in the middle of Edinburgh’s culture quarter in Festival Square. It will contain six screens, an events and conference center, a cafe-bar, restaurant facilities, and a rooftop terrace. 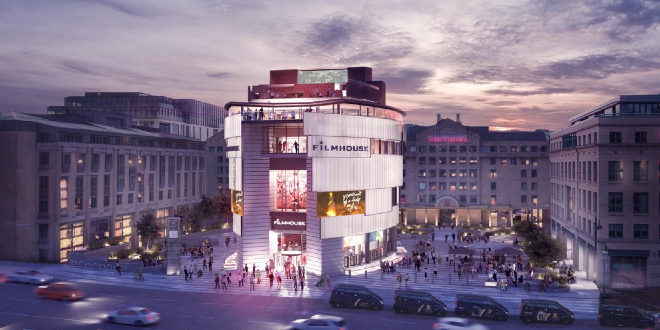 The new design for the proposed building for Filmhouse in Festival Square, Edinburgh, Scotland

Described by CMI chief executive Ken Hay as “a bold and contemporary building,” the new Filmhouse “will be a building for the future,” operating on a zero-carbon basis and encouraging staff and visitors to choose low-carbon travel options.

Despite the exciting opportunities the new Filmhouse could create, there has been some concern regarding the height of the building. It would be taller than the nearby Usher Hall, affect the views seen from Edinburgh Castle, and dominate the surrounding area.

There are also concerns that it might be “harmful” to the city’s World Heritage Site. The building’s proposed height has already been reduced by two stories since its initial plans were unveiled. But the Edinburgh World Heritage Trust wants the height reduced even further, stating that while it “welcomes the principle […], the proposal in its current form would have a harmful impact.”

Despite these complaints, the company running the existing Filmhouse has revealed that of the more than 650 submissions to the city council, almost 550 of them have supported the plans.

In sharing his support for the plans, Coltrane recalled his time working with various actors and directors at the Film Festival.

Years ago, I worked for the film festival, driving Martin Scorsese, Paul Bartel and Brian de Palma to screenings of their films. I decided that whatever I did with my life, it had to be about the movies.

The idea of a major film[-]oriented major [sic] facility in Scotland (some of us have been asking for this for 30 years!) is just terrific.

I wish the Filmhouse all the very best with this development.

If it’s given the go-ahead, the new Filmhouse is expected to attract over 800,000 visits each year, working alongside more than 200 partners and organizations.

The decision on the planning application is expected by summer 2021, and if successful, there are hopes that construction will begin in 2023 and be completed by 2025.

What are your thoughts on the Filmhouse development plans?