Everything Wrong with the “Prisoner of Azkaban” Movie

Harry Potter and the Prisoner of Azkaban is one of our favorite Potter installments. What’s not to love about a plot that brings us Remus Lupin and Sirius Black? In addition to having an excellent plot twist, this story explores the dynamics between our golden trio in detail, and it features some truly funny scenes and great Quidditch. Except for the time travel bit (cue collective groan), PoA is a truly enjoyable read. But the last time we watched the movie, we noticed some annoying plot holes that we just can’t get over.

Without reading the book, you’re bound to be thoroughly confused when, in the movies, Harry looks at a stag and goes “Dad? :O”. What the movie skips out on is that James became an Animagus – a stag – to help Remus through his full moons. We also never find out that Remus, Peter, Sirius, and James are the same Moony, Wormtail, Padfoot, and Prongs of the Marauder’s Map. The Marauders’ tale gives a real depth of character to Remus, Peter, Sirius, and especially James. It’s a real disservice to have left it out of the narrative.

We strongly prefer book Lupin, who barely mentions either Lily or James and is extremely jumpy around the topic of his schoolboy days. It makes sense that Remus would avoid talking about the people in his life back then as much as he could since his social circle at the time also included the famous mass murderer on the loose. There is something movie Lupin does, albeit a small detail, that really bugs us.

There is a sweet bonding moment in the movie when Remus tells Harry that he went to school with Harry’s parents. He says that Lily helped him through some of his tough times, but when it comes to James, he is quite nonchalant. Now, it’s not that James wasn’t a troublemaker like Remus says, but consider this – James found out about Remus’s “furry little problem,” accepted him, and became an Animagus (which is a complicated process, btw) just so he could keep him company during the full moon. Not only that, but according to the author, when Remus found it hard to retain employment due to his affliction, James provided him with financial support. Would anyone, let alone Remus I-deserve-no-love-because-I’m-a-monster Lupin, be so flippant as he is in the movie about a man who really did stick with him through his toughest times?

Ron’s terrible movie edit begins in PoA. Not only were his crucial moments given away to Hermione, but some of his best character-building parts are simply omitted – Ron standing up for Hermione to Snape’s “insufferable know-it-all” remark, Ron counseling Harry to not go seeking trouble after finding out about Sirius’s betrayal, Ron being genuinely worried about Hermione’s crazy schedule, Ron stepping in to help Hagrid with Buckbeak’s trial, Ron standing on his broken leg in front of a convicted mass murderer to defend his best friend… Instead, Ron is reduced to a sidekick who is either always stupid or scared. Bravo. 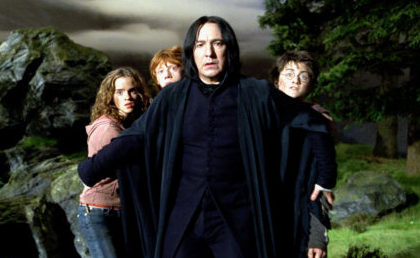 Movie Snape is a highly watered-down depiction of his book version, who is particularly vicious and unlikeable in this one. When Snape subs for Lupin, we skip over the detail of him assigning the class an essay on not only identifying a werewolf but also killing it – something he knows Remus, a werewolf himself, would have to go through the gruesome details of while evaluating the homework. We also don’t get to see how absolutely berserk Severus gets when Sirius escapes – blaming Harry repeatedly and taking his anger out on Remus by outing his lycanthropy.

5. The Dynamic Duo of Crookshanks & Padfoot

Book Crookshanks is one of the most badass side characters in the series, but sadly, the movies reduce him to just an ugly cat. His alliance with Padfoot is an amusing subplot, culminating in a heartwarming scene in the book when Harry is about to straight-up murder Sirius, but Crookshanks curls up on top of Sirius’s chest as if challenging the boy. Maybe this action by her pet is what sways Hermione to hear Sirius out.

6. Where is Oliver Wood?

‘Where is Wood?’ said Harry, suddenly realizing he wasn’t there. (PoA 180)

Homeboy did not lose his mind for an entire year trying to win the Quidditch Cup for Gryffindor to have the movie makers sleep on him. Oliver Wood’s neuroticism is hands down one of the best subplots this story has ever had, and we cherish every bit of it.

Despite all its gaping flaws, we know we will still be watching PoA with as much enthusiasm as before – perhaps with a slight bitterness in the mix for the injustice that it does to our favorite characters.