The Sorting Ceremony is an important milestone for any witch or wizard – will the Sorting Hat place you in Gryffindor, Hufflepuff, Ravenclaw, or Slytherin?

The concept of identifying as a member of one of the Houses has seeped into the Muggle world, and one of the first questions any Potterhead will ask on meeting another is, “What’s your Hogwarts House?”

While Muggles can’t be officially Sorted by the legendary Sorting Hat from the Harry Potter books and films, Sweet Surprises 613 has come up with a magical way to discover your House: through a hot chocolate.

Sweet Surprises 613 is based in Ottawa, Canada, and sells treats and gift baskets for all occasions, specializing in hot chocolate bombs. The idea is that you pop the hot chocolate bomb into an empty mug and when warm milk is poured over it, the heat of the milk cracks the bomb, releasing chocolatey goodness.

You can order a four-pack of mini hot chocolate bombs for $14 or four regular-size ones for $26. Each box usually has a mix of the four colors, so you don’t know what to expect, but if you already know your House, you can also select the exact colors you’d like. 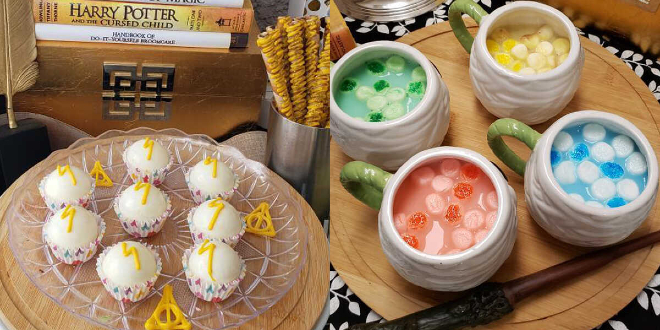 The hot chocolate bombs sold by Sweet Surprises 613 Sort the drinker into their Hogwarts House.

Sweet Surprises 613 isn’t the first to provide a way for Muggles to discover their Hogwarts House: Wizarding World Digital allows fans to take part in an online Sorting Ceremony. Once they have been Sorted, their House is displayed on their Wizarding Passport alongside their wand and Patronus.

On top of this, a student from Massachusetts Institute of Technology created a hat that uses a system of 14 noninvasive electrodes to capture brain activity, detecting what the wearer is imagining. It then uses this technology to Sort the wearer into a Hogwarts House based solely on what they are thinking. Now that’s magic!

We’d like to try one of the Harry Potter hot chocolate bombs from Sweet Surprises 613. But if you can’t get your hands on one right now, why not try to make your own hot chocolate bombs with our recipe inspired by Jacob Kowalski’s line in Fantastic Beasts and Where to Find Them, “Look, cocoa!” (WtFT Scene 45).