While fans of Fantastic Beasts will know that Katherine Waterston has spent the last year filming on and off as Tina Goldstein in the franchise’s third installment, this isn’t the only project she’s been working on.

In a recent episode of Collider Connected, Waterston has discussed her latest film, The World to Come, what it was like growing up with a famous father, and the Fantastic Beasts franchise.

The World to Come is based on a book of the same name. It’s a 19th-century drama set in the Northeast and follows an emotional battle of loneliness and hardship, centering around a romance that sparks between Waterston’s character (a farmer’s wife) and her new neighbor, played by Vanessa Kirby.

Jim Shepard wrote the book and has spent the last 15 years working with Ron Hansen writing its screenplay, which Waterston described as “one of the best scripts I’ve ever read.” 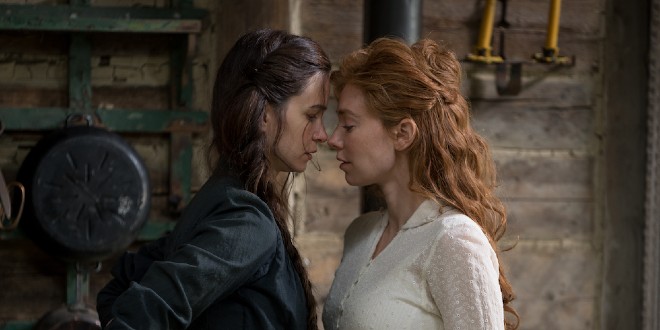 Katherine Waterston and Vanessa Kirby in “The World to Come”

Waterston couldn’t recall exactly when she decided to pursue acting but knew that she was influenced by her dad, Sam Waterston, an esteemed actor in his own right, known for his roles in Law & Order, The Great Gatsby, and Woody Allen’s Interiors.

As a second-generation actor, Waterston didn’t want to be perceived as “some kind of silly dilettante who is bopping around and hanging off the coattails of her dad” and decided to study acting formally.

Waterston discussed the types of performers whose work inspired her, mentioning John Cazale (The Godfather, The Deer Hunter), whose films she has “watched again and again.”

When I was young, I was always really drawn to performers who disappeared into the roles and performers who weren’t really – how do I say this? – begging for attention with their work, the actors who, I don’t know, sometimes went under the radar or unnoticed but always delivered something that felt true, [whom] I really connected with when I was young.

Despite being drawn to actors described as “under the radar” and “unnoticed,” Waterston herself isn’t one because she is now part of the infamous Wizarding World in the Fantastic Beasts films.

Waterston had never starred in a franchise before, and she admitted that before signing on for Fantastic Beasts, she wasn’t sure what to expect.

Waterston confirmed that David Yates is still set to direct all five Fantastic Beasts films, commenting that because “he’s worked very closely with J.K. Rowling for a long time and very few people have access to her,” she “can’t really imagine how it would work any other way.”

Waterston also revealed that before Mads Mikkelsen was cast as Grindelwald, they hung out together in Venice last summer. However, she hasn’t had the chance to work with him yet since they “don’t have anything together in the film.”

We can’t wait to see what else Waterston has to offer in the future. You can watch Waterston’s interview in full below, and don’t forget to check out her new film The World to Come.