March is Women’s History Month, and US Quidditch (USQ) decided to celebrate it by sharing the stories and experiences of women in the Muggle quidditch community.

To honor the women [who] came before us in quidditch and to hopefully inspire those [who] will come after, we reached out to a few women who make this sport as wonderful as it is in order to ask them to talk about their experiences in quidditch.

Five women were chosen for this celebration:

All of them were given the same questions about their experiences, their favorite quidditch memories, and what they would like to say to women who are starting to play quidditch. Quotes from the interviews were posted on the USQ Facebook page. 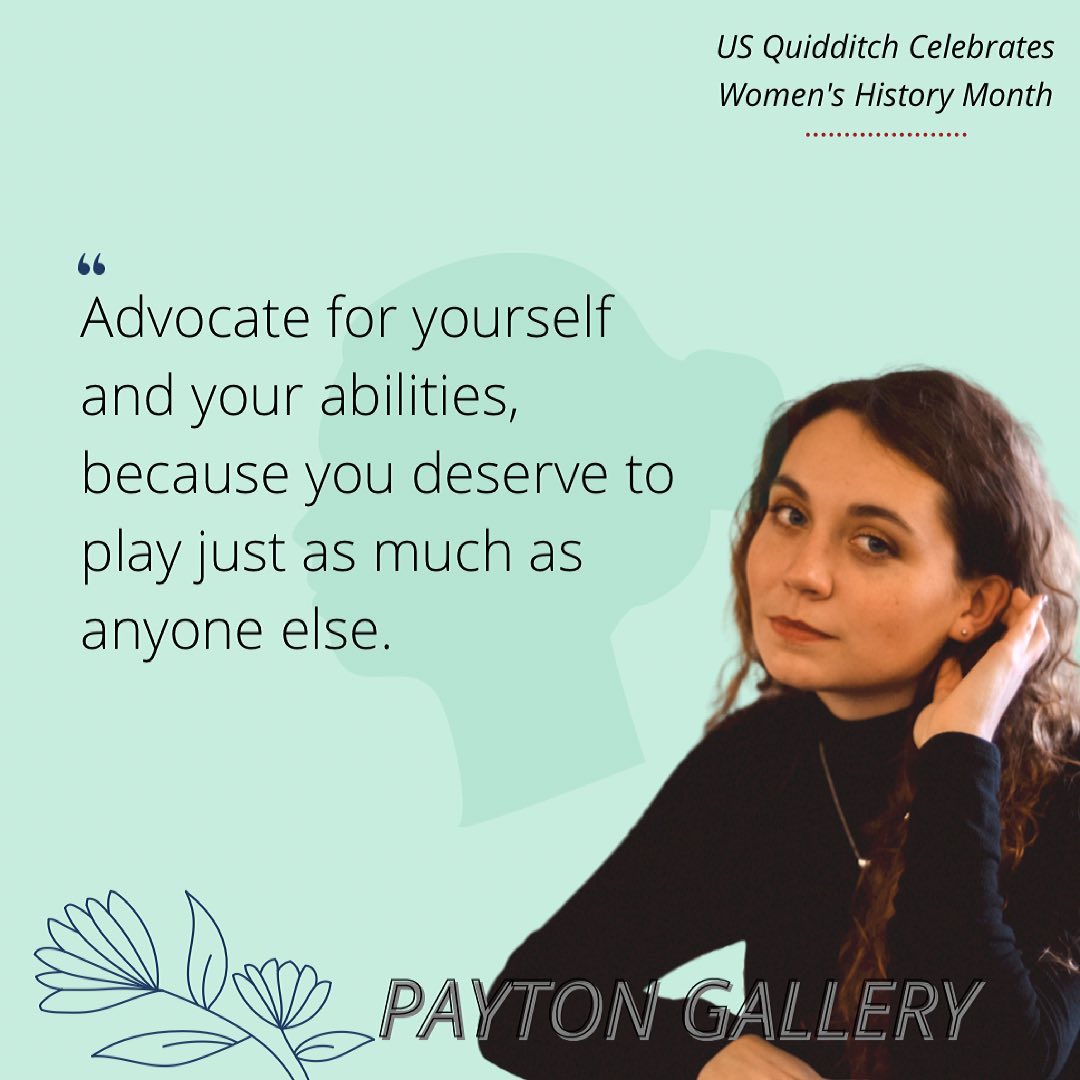 Payton Gallery gives advice to women who are starting out in Muggle quidditch. 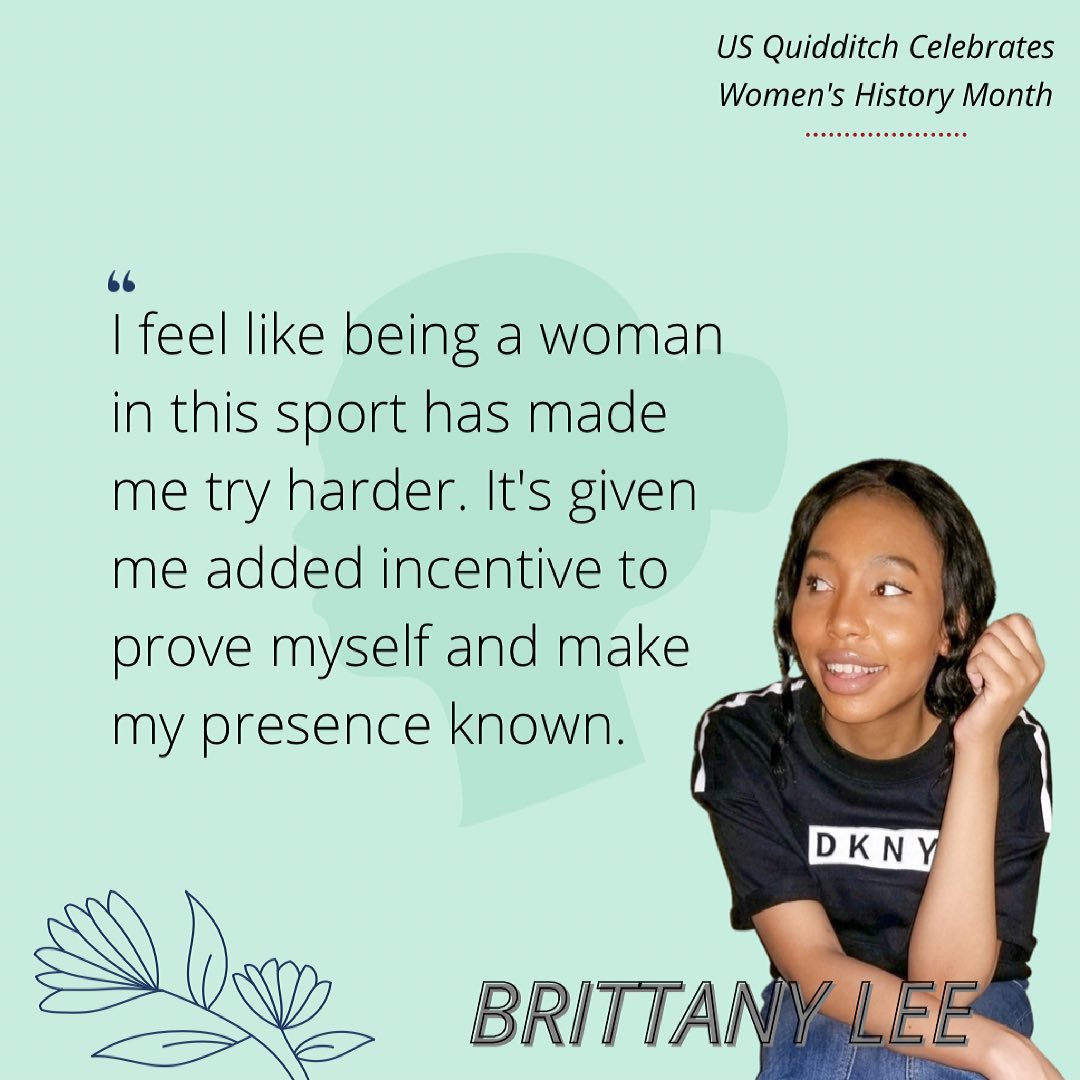 Brittany Lee talks about her experience as a woman in Muggle quidditch. 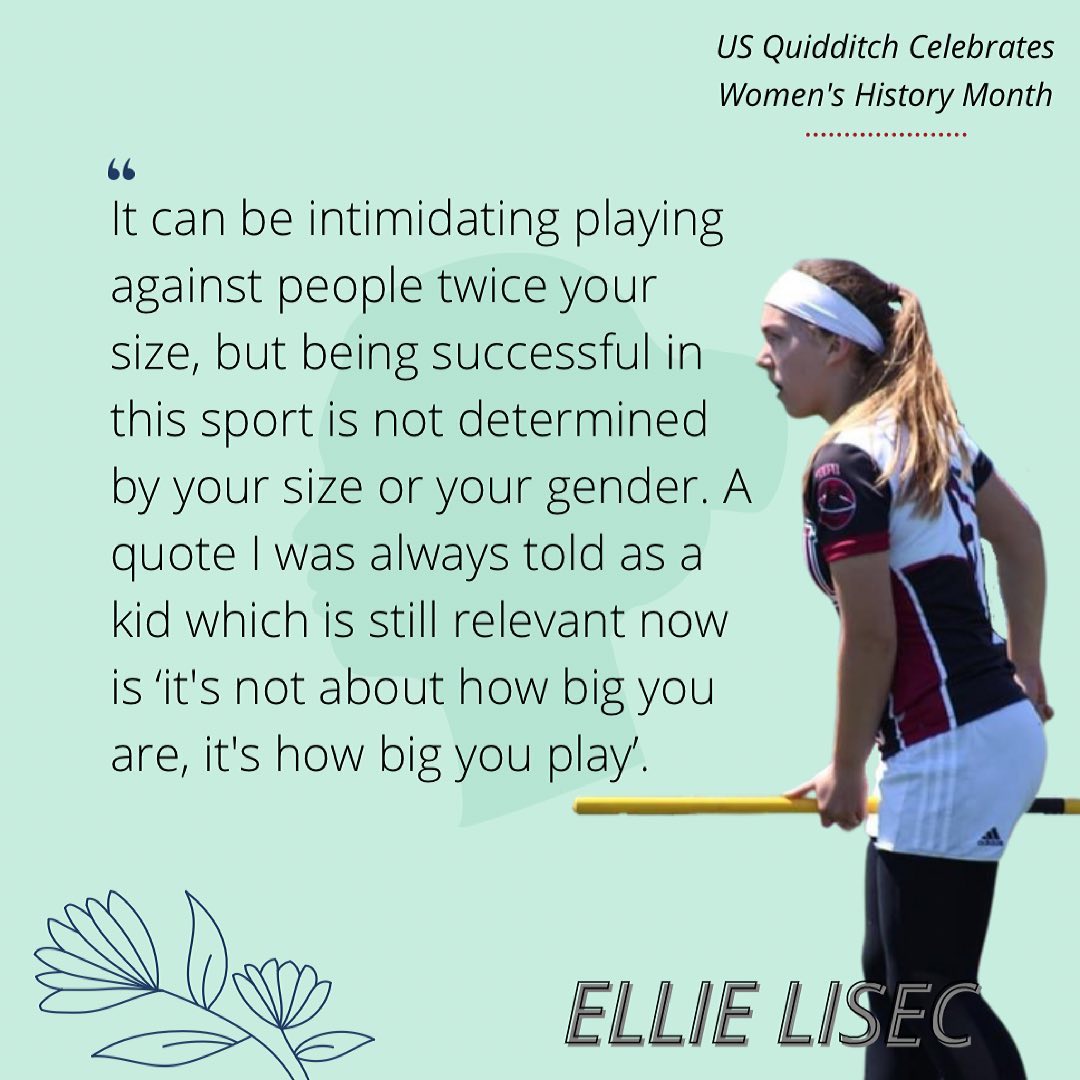 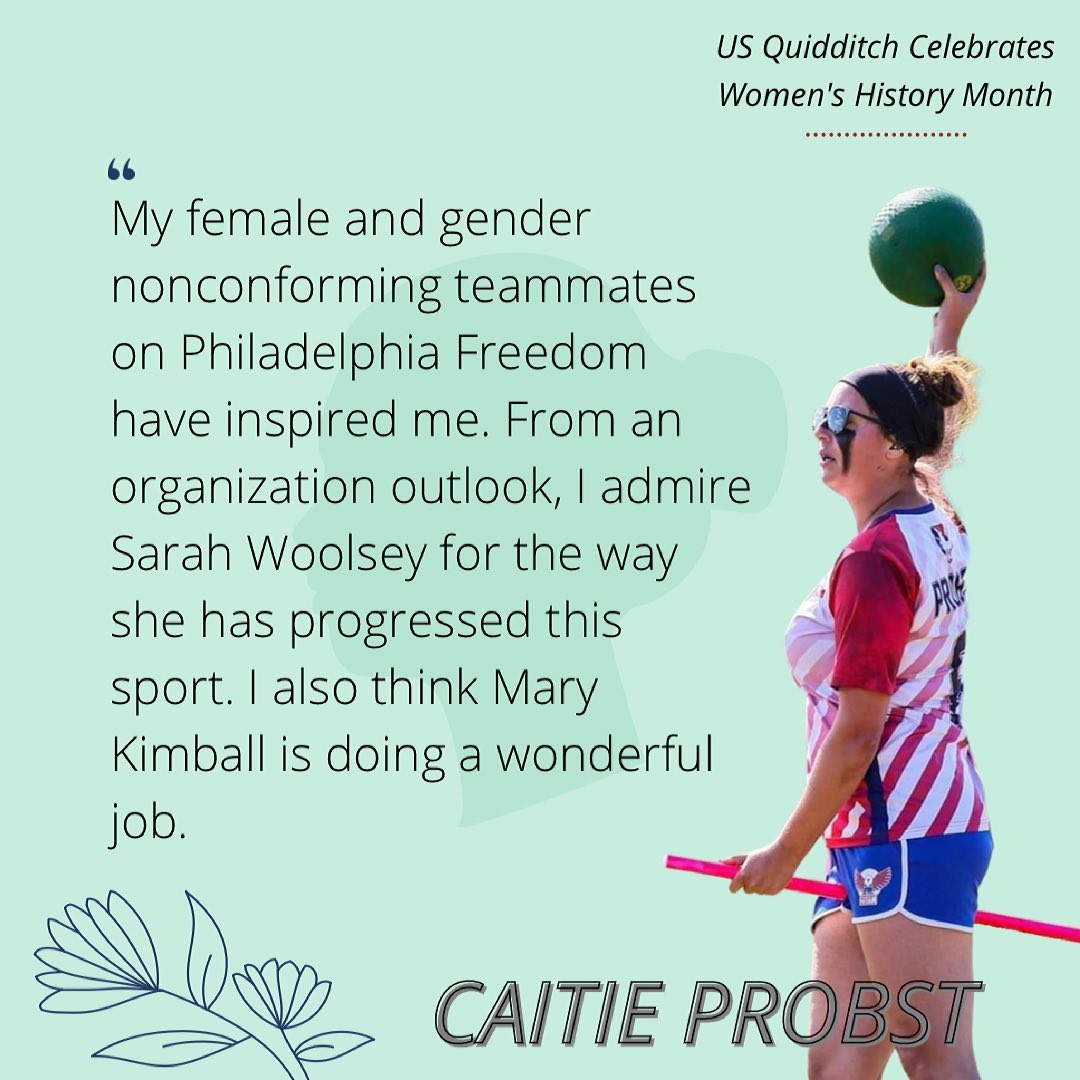 Caitie Probst talks about the impact that other women in Muggle quidditch have made on her. 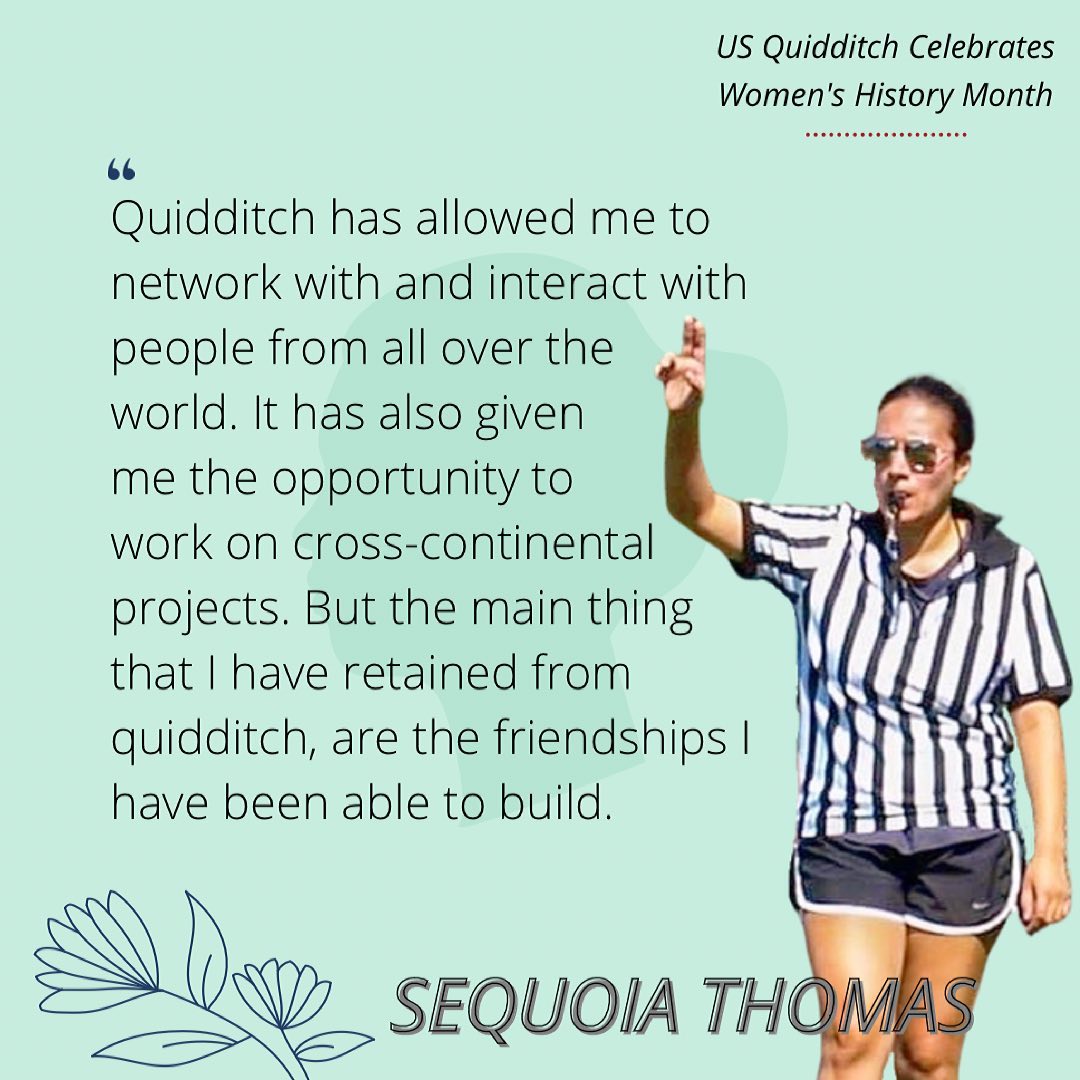 Sequoia Thomas talks about how quidditch has shaped her life outside of the sport.

QuidCon was also held this month. One of the panels, More Than Just a Body on the Field, was about sexism, misogyny, and transphobia in quidditch. It was one of the most important and most attended panels at the event. After the panel ended, the discussion continued on the panel’s Slack channel days after QuidCon itself. This was greatly appreciated by one of the panelists, Jeannette High.

This panel still gives me shivers thinking about how awesome the women, transgender people, and non-binary people in our sport are. 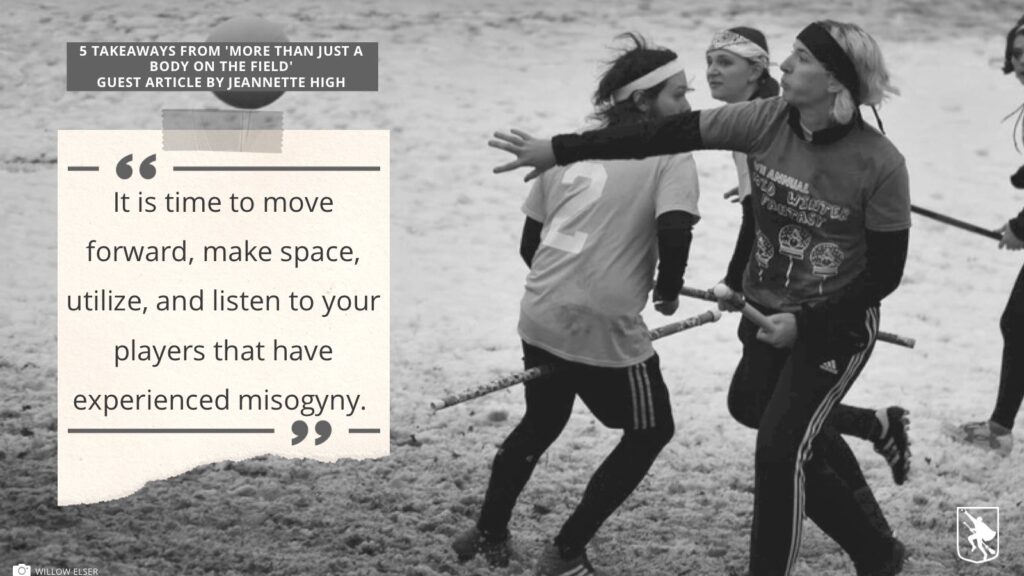 As part of Women’s History Month, High tried to summarize five main issues discussed at the panel and in the Slack channel. The first problem was with putting women and non-binary players together and creating a new binary system: “non-male” and male. Another issue was with the gender maximum rule in quidditch, which doesn’t make the sport automatically equal and comforting for everyone. Women also recognize that the absence of a gender rule might keep them from being sent to the pitch. This leads to another issue: underestimating women. There were interesting stories about it on the Slack channel, such as Bex McLaughlin’s.

The literal best one was… South Regionals 2013. I had shaved my head a few months before that, our jerseys were baggy.
Captain shouting at his teammate: “Mark him, mark him, #6!”
Him: “What? Number 6 is a girl.”
Captain: “Oh, don’t bother, then.”
The player lit[e]rally ran away from me.
… okay, then. I scored, unmarked, open about two minutes later.

High advises that the solution to this is to make space for all players and to appreciate their skills, not their sex or gender. Even if they aren’t so good at the beginning, that doesn’t mean that they should be put aside. Instead, they should be coached and motivated. 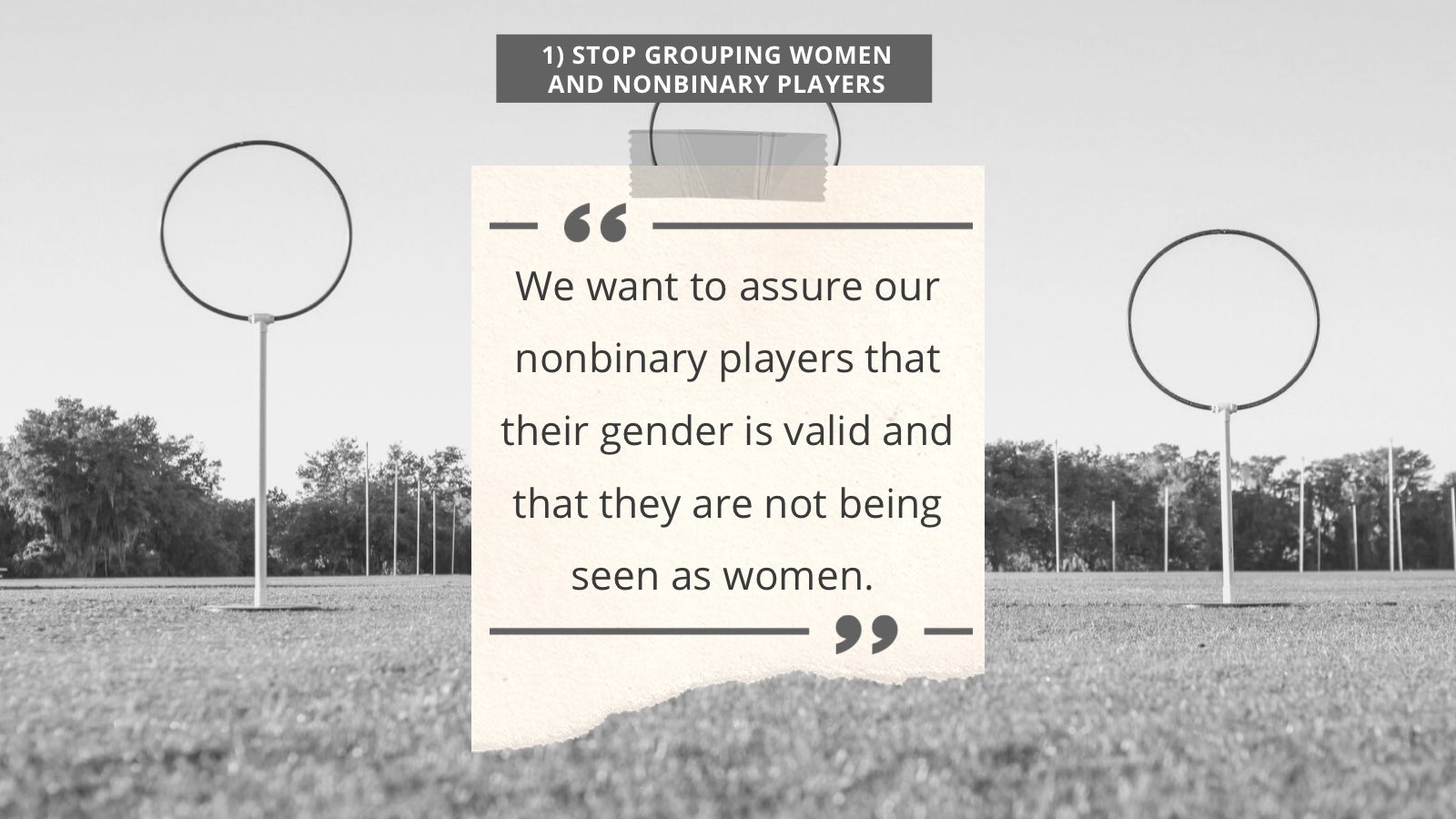 The first takeaway is to stop grouping women and nonbinary players. 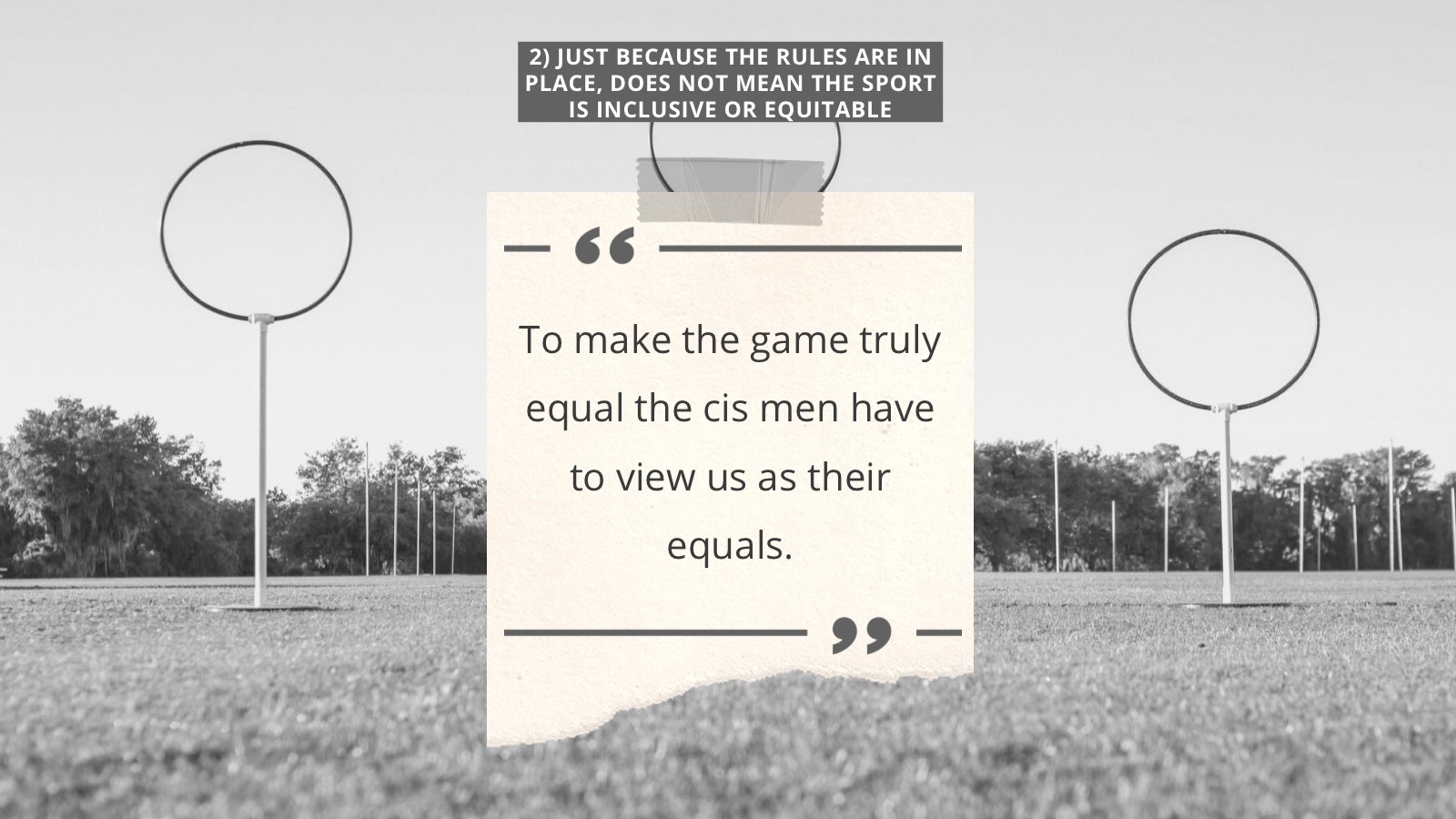 The second takeaway is to go beyond the rules in ensuring inclusivity and equity. 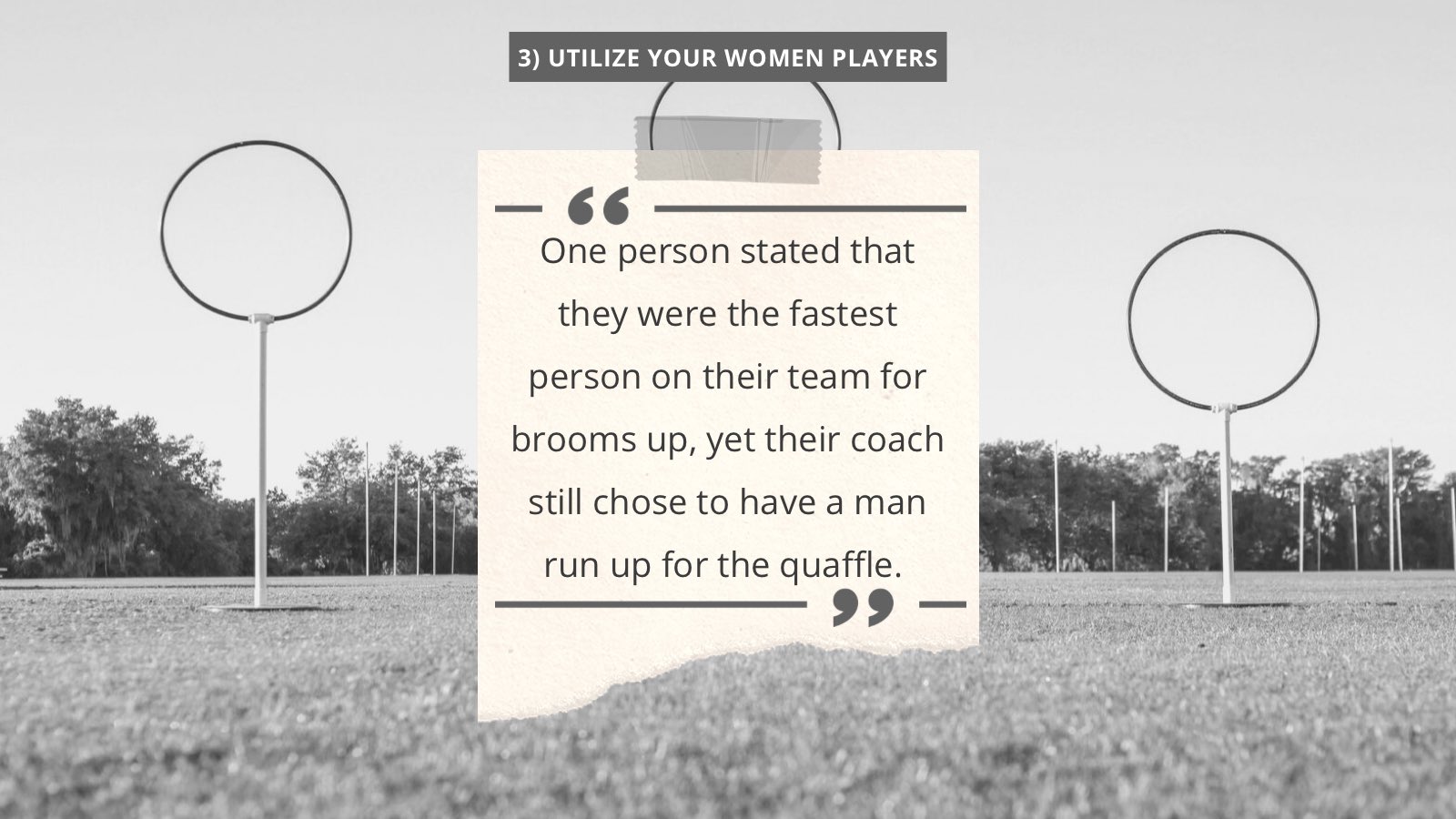 The third takeaway is about utilizing women players. 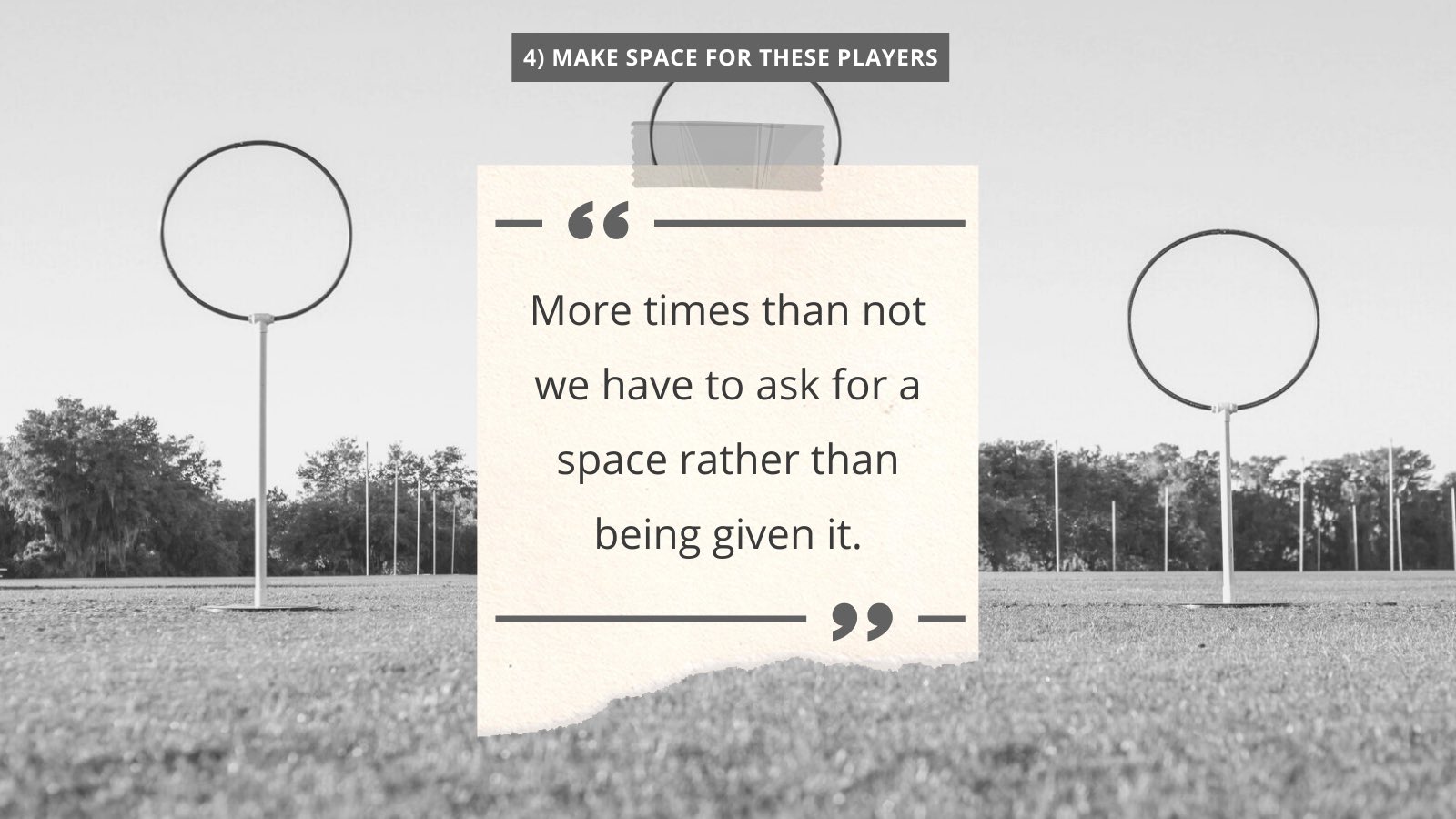 The fourth takeaway is to make space for these players. 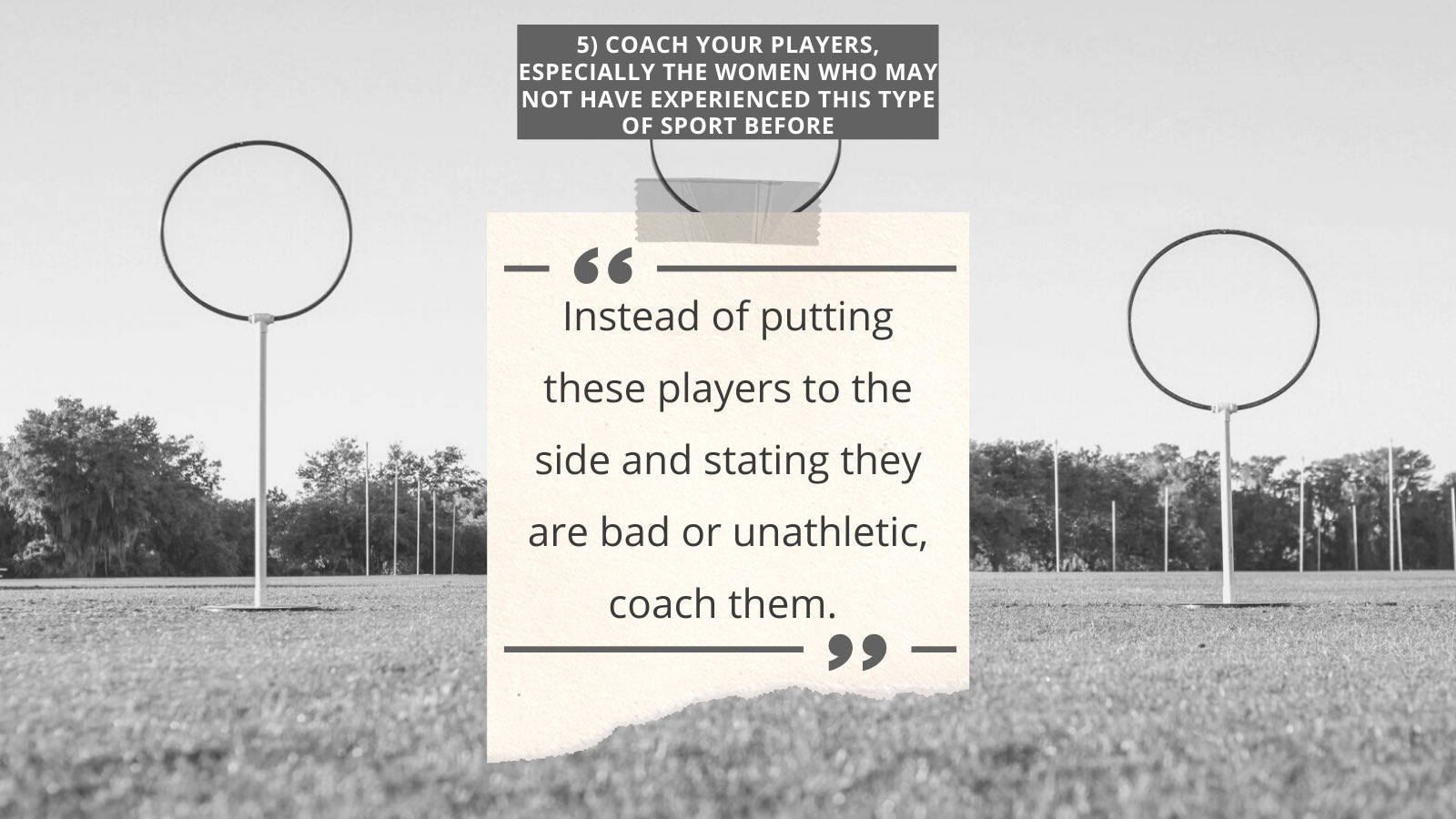 The fifth takeaway is about motivating and coaching players, especially inexperienced women.
Want more posts like this one? MuggleNet is 99% volunteer-run, and we need your help. With your monthly pledge of $1, you can interact with creators, suggest ideas for future posts, and enter exclusive swag giveaways!
Support us on Patreon