It’s any Potterhead’s dream to stand next to the actual props and costumes used in the Harry Potter film series and to walk through the sets used to film the franchise. If you live in or have visited the United Kingdom in the last nine years, you might have had the chance to do this at Warner Bros. Studio Tour London – The Making of Harry Potter.

Luckily, those living on the other side of the world will be able to experience this too because a brand-new Harry Potter-focused Warner Bros. Studio Tour is opening in Tokyo, Japan, and a new website and promotional video have been released for it.

While the video only contains footage from London’s Studio Tour, the website gives us a bit more of an idea of what to expect.

With iconic film sets to explore, costumes and props to discover and magical experiences to delight, the indoor attraction invites visitors to enjoy scenes from the films first-hand and discover how the world’s favourite book series was brought to life on screen.

Unlike a theme park, the Studio Tour will allow visitors to step into film sets and enjoy an exciting entertainment experience, similar to the UK attraction.

The Studio Tour will be situated on the site of Toshimaen, an amusement park that closed in 2020. It is hoped that it will create numerous job opportunities for locals and attract more visitors to the town.

The only hint we have of what the Studio Tour might look like is on the website’s home page, which displays a concept image of groups of people walking toward the entrance, surrounded by colorful flowers and trees. 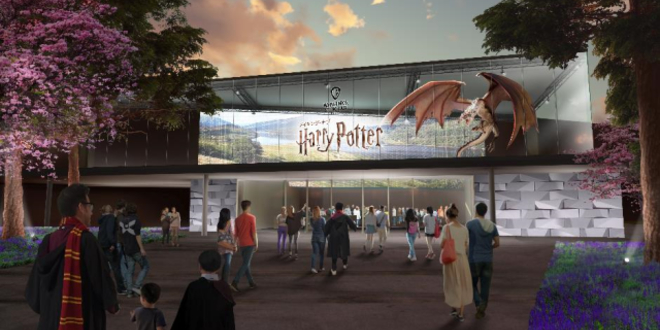 A concept image of Warner Bros. Studio Tour in Tokyo

Toshimaen is described as a “beautiful leafy leisure venue,” and the website highlights that the development plans will take the local community into consideration and ensure the site maintains its harmony with the surrounding environment.

Warner Bros. Studio Tour Tokyo is committed to preserving the green landscape of Toshimaen. Where conservation is not possible, new trees will be planted to replace those removed due to age or for construction reasons, ensuring the same amount of green space is maintained.

The Studio Tour will cover an area of around 30,000 square meters (323,000 square feet) and will take approximately half a day to walk around. It will be the second attraction in the world of its kind and is set to open in the first half of 2023.

We’re so excited to see what Tokyo’s Studio Tour is going to look like! Are you?