Gather round, all ye Harry Potter fans in Asia; we’ve got breaking news for you! Plans for the next Warner Bros. Studio Tour have finally been confirmed, and it will be built in Tokyo, Japan. This is only the third Studio Tour in the world, following the London and Hollywood attractions. 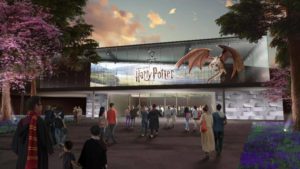 Thanks to an artist’s rendering of the Japanese Studio Tour, we’ve got a first look at the impressive exterior.

Similar to the attraction in the United Kingdom, this Studio Tour will span 323,000 square feet (30,000 square meters) and take visitors on a magical behind-the-scenes journey through Hogwarts and Diagon Alley. There will be set replicas from the Potter films, original costumes and props, and an immersive experience depicting Harry Potter‘s page-to-screen transformation.

Making way for the Studio Tour is Toshimaen, which will be closing down at the end of August. Despite being one of the largest and oldest amusement parks in Tokyo, it has suffered a crippling drop in visitors in recent years. The Studio Tour will be ready to welcome Potterheads in the spring of 2023, barring any complications arising from the coronavirus pandemic. Given that over 420 million dollars was injected into the opening of the Wizarding World of Harry Potter at Universal Studios Japan, it is likely that this Harry Potter exhibition will incur an equally hefty price tag. 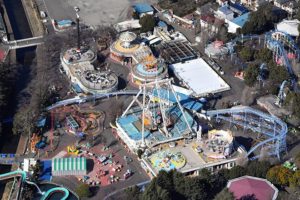 An aerial view of Toshimaen reminds us of just how massive its grounds are.

While there are not many other Potter attractions in Asia, Japan has the Wizarding World of Harry Potter at Universal Studios Japan in Osaka, and a new Harry Potter and the Cursed Child production is set to make its Tokyo debut in 2022.

Since its opening, Warner Bros. Studio Tour London has seen almost 14 million visitors. Together with the new Studio Tour and Cursed Child production, it is hoped that the magic of Harry Potter will revitalize Japan’s tourism industry in the wake of the devastating impacts of the pandemic. 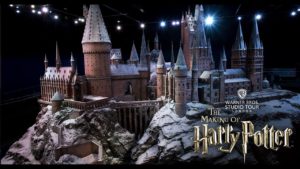 The full-scale model of the Hogwarts castle is an iconic feature at Warner Bros. Studio Tour London. Will we be seeing a replica in Tokyo?

In a press release, Warner Bros. CEO Ann Sarnoff expressed her excitement for the massive project:

Warner Bros. has been telling stories for almost 100 years, and Harry Potter is among our most popular and beloved. The Studio Tour [in] Tokyo will continue this tradition while offering fans of all ages a unique way to get closer to the films and truly immerse themselves in the Wizarding World. As an established tourist destination with beautiful green spaces, Toshimaen is the perfect environment for this attraction. It is also important to us that the local community is involved in the development process, and we are looking forward to creating something very special.

In three years’ time, Asian Potterheads will no longer need to travel across the globe to experience the spellbinding making of the Harry Potter films. Instead, there will be a Studio Tour right on their own continent. Will you be dropping by when its doors open?