Not only does Quidditch Europe have new leadership, but there will also be changes in QuidditchUK’s leadership. Currently, the positions of president and Gameplay Director are open, and applications can be submitted until April 30.

QuidditchUK opened the positions because it was decided at the 2018–19 Annual General Meeting that every position on the executive team would be held for a two-year term. The idea was to avoid burnout and to improve the management of the leadership team. 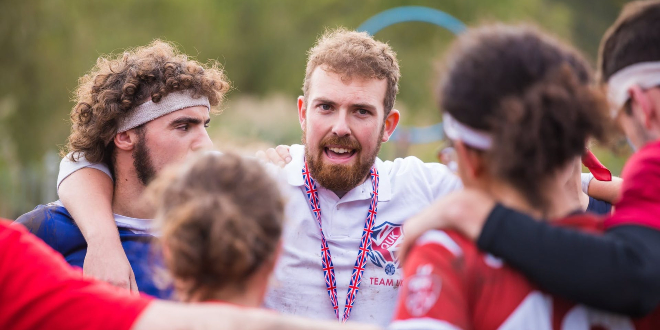 Eamonn Harrison’s term as Gameplay Director has ended as of April 9, while Matt Bateman’s term as president ends on May 14. Both have planned to reapply for the positions. Bateman talked about the impact he can make as president.

The role of President is maturing alongside the sport – it’s an exciting time to be a part of QuidditchUK with everything happening both in the United Kingdom and abroad. We’re now starting to see the first glimpses of maturity come into the community, and I’m really excited to continue to be a part of that growth and change as we enter a new chapter.

Both positions are part of the Executive Management Team, which leads QuidditchUK and oversees its departments. For example, the Gameplay Director helps shape the sport, according to a quote from Harrison.

The Gameplay Director position is a key one for helping shape the direction of the sport, especially after the fallow period we’re just starting to come out of. Being able to lead decisions on how match officials are trained, what the rules of the sport are within the UK, and how tournaments are structured to ensure fair and exciting competitions is very rewarding.

Those interested in applying for a position on the Executive Management Team can find out more from QuidditchUK.