JKR did not invent the Order of the Phoenix. It truly exists. Thrilled & deeply honoured to have the REAL one conferred upon me by H.E. the Greek Ambassador today. Ζήτω η Ελλάδα! pic.twitter.com/nXfh4Q1VuG

Fry was presented with this prestigious award in London on Wednesday by H.E. Mr. Ioannis Raptakis, Ambassador of Greece. This medal is awarded to either Greek citizens or foreigners who have excelled in their field of practice or public life and have helped raise Greece’s prestige internationally. Fry received this honor “for his contribution in enhancing knowledge about Greece in the United Kingdom and reinforcing ties between our two countries.” 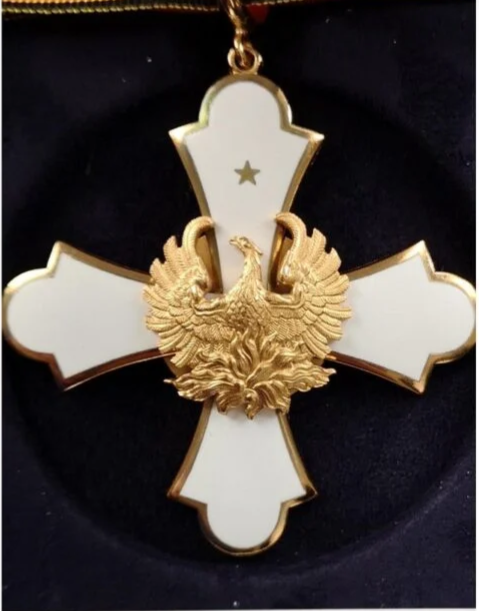 Medal for Grand Commander of the Order of the Phoenix (Source: Greek Embassy @GreeceinUK)

The Greek Embassy in the UK posted a video of Fry after receiving this honor. He began his speech with a Greek phrase and congratulated Greece on the 200th anniversary of its War of Independence against Ottoman rule. Following this, Fry mentions his nation and the honor of this award, stating, “I shall do my very best over the rest of my life to see if we can, in Britain, return what is yours in the shape of the Marbles of the Parthenon.” This comes in the midst of a long-standing debate between Greece and Britain on the legitimacy of Britain’s claim to the artifacts that dates back to the early 19th century. Fry then praised Greece for its resilience and the strength of its people. He was so appreciative of this award.

Greece is an idea as well as a modern Republic. And so when we look back at the 200 years in which you established your freedom and independence, through a few problems here and a few problems there, we celebrate the strength and vigour of the Greek people, the descendants of the great heroes.

Fry is definitely deserving of such an award. He brings life, laughter, and joy to any screen he’s on and gives back to the world in whatever way he can. Did you know the Order of the Phoenix was a real thing and not only in the Harry Potter series? Let us know!