On September 25, 2018, Korean actress Claudia Kim was announced for the role of Nagini in Fantastic Beasts: The Crimes of Grindelwald. I was joyful when I found out, then overcome with laughter. I marked the moment with a tweet: 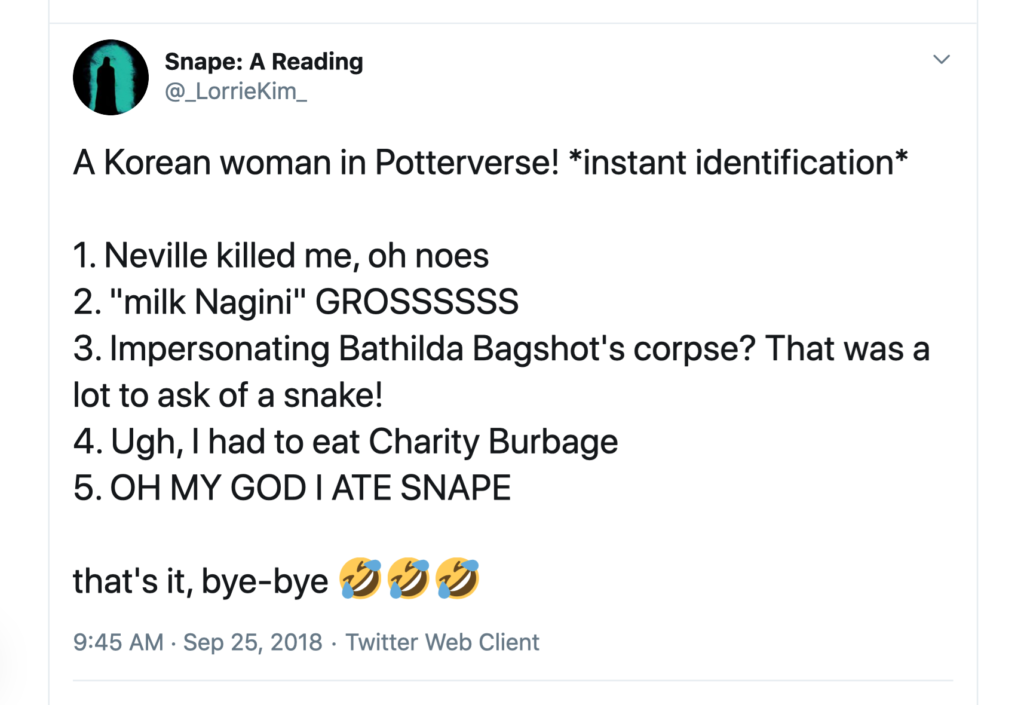 I couldn’t get enough of the coverage: Claudia Kim at a press event, saying happily, “I’m Nagini. I’m blushing!” Or her Instagram story where she posted a screenshot of innocent little Neville from Harry Potter and the Chamber of Secrets with the caption, “Neville! Ahhhh!,” a scared-face emoji, and a snake emoji.

Unlike the Harry Potter characters, who were first created by a solo author and then adapted for the screen, the characters introduced in Fantastic Beasts are collaborations. The woman of color embodying Nagini has as much to do with inventing the character as the White scriptwriter and director do. I couldn’t wait to see what a Korean actress would bring to the Wizarding World: someone whose inflections and microexpressions were informed by a lifetime in Asia, as befits the international scope of Fantastic Beasts.

That was a fun morning.

And then… I saw some of the backlash against the casting and story line.

I saw claims that it was racist, a “disaster,” to even cast a Korean woman as a character who, as some people put it, ended up as the pet, the slave, or maybe even the lover of an evil White man. That the first time a Korean body is represented in the Wizarding World, it should not be in a degraded status as a doomed young woman. That this played into stereotypes of Asian women as subservient or fetishized. That this character, by definition, could not be a “strong, independent female character.” That her eventual fate robs the character of all agency.

Some of the concerns seemed fair to me: for example, that the filmmakers should have found another Indonesian actress to play Nagini, who was written as Indonesian, when their first choice withdrew due to pregnancy. Or that Rowling could not be trusted to have a solid understanding of naga mythology. However, I found much of the controversy against Claudia Kim’s casting so hurtful that I had to turn away. A Korean woman joined Potterverse and faced criticism, even mockery, on the press tour before anyone had even seen her performance. It made my stomach hurt to watch her go through that. I’ve had that visceral experience, entering the room as the only Asian woman and feeling waves of disapproval, murmurs that my presence has turned something into a disaster for reasons that have nothing to do with my worth or my performance, with nothing I can do to fix it, only that they didn’t want a Korean woman there.

Many of the objections struck me as unintentionally racist even if they purported to call out racism.

When you watch the film, you see that it does not fetishize Nagini or show her as submissive at all. Quite the opposite: It shows her resisting being fetishized as “beautiful” and “desirable” by the circus master who exhibits her as one of his “freaks and Underbeings.” She disobeys his stage directions, making him a laughingstock, and then she transforms into a snake and attacks him. Far from lacking agency, Nagini becomes one of the few characters in Potterverse to manage her own escape from captivity, and she does it by forming a bond of affection with another “freak” and joining forces to free them both.

I believe people objected to the casting because their own fears, their own mental images of racism against Asian women, obscured their ability to see how this character functioned in the actual movie.

Nagini embodies the theme of the Fantastic Beasts series: that the human attempt to divide living creatures into binary categories – as either beasts or beings – does a sort of violence that enables othering, exploitation, and dehumanization. That this splitting – whether of the natural world, ethnic groups, individual souls, or the atom – is part of what gave rise to World War II. That even our monstrous aspects are parts of our whole selves and have integrity.

There are times that Rowling writes characters in ways that indicate her core messages to us, the readers and viewers. We can feel that in Dumbledore’s influential line: “It is our choices, Harry, that show what we truly are, far more than our abilities” (CoS 333).

In Crimes of Grindelwald, it’s Nagini who delivers that message. When Credence surrenders to Grindelwald, he tells Nagini, “He knows who I am.” Nagini replies, “He knows what you were born, not who you are” (256). That’s the kind of character she is.

Another of Rowling’s core messages comes up when Harry accepts that he may be doomed but commits to fighting, knowing “the difference between being dragged into the arena to face a battle to the death and walking into the arena with your head held high” (HBP 512). When Nagini walks into the circus ring, fights her captor, and escapes, we see that she is brave in the same way Harry is. We know how Nagini’s story will end, and so, to an extent, does she. But to believe that a tragic fate makes a character weak or without agency is to misunderstand one of the major themes of heroism in Rowling’s stories.

Nagini’s character doesn’t accord with any of the backlash I encountered before the movie release. She is rebellious, multilingual, affectionate. She isn’t shown as Voldemort’s sexualized, submissive follower: The only person in Potterverse who fits that description, Bellatrix Lestrange, is a wealthy White woman. If anything, her relationship to Riddle is more likely to be a perverse take on a mother figure, as foreshadowed by Rowling’s darkly funny reference to “milking” Nagini in Harry Potter and the Goblet of Fire so that Wormtail can bottle-feed Voldemort. We don’t yet know how the two cross paths. We see in Crimes of Grindelwald, though, that Nagini is protective toward the vulnerable, and she probably understands Parseltongue. At the time of this movie, Tom Riddle is less than a year old and has no mother.

At Grindelwald’s fascist rally, Nagini fearfully warns Credence, “They’re pure-bloods. They kill the likes of us for sport” (240). This is a moment of stark racial fear that I recognized from times I’ve been in an all-White crowd. When Rowling writes the racist mob dynamic in her novels, it tends to be allegorized as blood purity. This is something that the medium of film can convey more chillingly than fiction. The White writer’s screenplay indicates that the Maledictus and the Obscurial feel fear because of a lack of status, but the Asian actress and the queer Jewish actor playing them, informed by their life experiences, add many more dimensions to the scene’s impact.

Yes, Nagini is shown as blood-cursed and trafficked. Is that story not welcome on-screen in an international series about the prejudices that led to World War II? Is the Asian woman character required to be relentlessly inspirational even if it’s discordant with the rest of the story?

When critics object that simply casting a Korean actress as Nagini is racist, this is what I really hear: This role should have gone to a White woman for the comfort of viewers who are uneasy with the images in their own heads of Asian women.

What I hear is that people were happier when there was no Korean woman in Potterverse. They don’t want us if it makes them feel uncomfortable.

All right, let’s hear it. What narrative for a Korean woman in 1927 would these critics suggest? How, exactly, are we supposed to be before we’re approved to enter the story?

The nationality of this casting choice brought to mind a Korean narrative that I don’t believe was intended by Rowling and Yates, who created Nagini in the script as Indonesian.

What was going on in Korea in 1927? For one thing, there was no Korea. Korea was brutally colonized by Japan from 1910 to 1945, and that included slavery and trafficking of Korean girls on a massive scale. Japanese school teachers were recruited to select victims from Korea’s most established families in a deliberate move to demoralize and destroy the culture, similar to the Lestrange story line with the prestigious Kama family. This issue was silenced for decades. It remains unresolved and a source of diplomatic conflict between Japan and Korea. A few of the survivors are still alive.

The screenplay says, “Nagini’s senses are hyperalert. She can smell danger” (119). Without any need to go into Maledictus lore, we can recognize this hypervigilance as a natural response to being trafficked and exploited. The way Claudia Kim plays this alertness feels culturally familiar to me: She’s always quietly scanning the surroundings, always the first to intuit unspoken dynamics, a skill that Koreans call nunchi. I see it in her stillness, the sweep of her eyes, her readiness to speak a cautionary word or extend a protective hand. This isn’t written into the script; it’s just something the actress brings to the role that makes Nagini read Korean to me.

I can understand not trusting Rowling or Warner Bros. to portray Korean women during the time before World War II. However, it is a destructive trap to hold that it’s somehow shameful or improper to tell in public the stories of women of color who endured slavery and trafficking. Don’t people who died while enslaved by others deserve to have their stories told? Koreans are not the only ones that happened to – not even in this movie series – and the survivors and their younger generations continue to pay the cost, like a blood curse. Shame and silence only lead to more damage with the greatest burden on the people who have suffered most already.

When the Crimes of Grindelwald DVD was released, the two beautiful deleted scenes with Nagini deepened her story. Credence and Nagini are clearly lovers in these scenes. In one, she encourages him to release his Obscurus peacefully, “because we’re free,” and proves that it can pass through her without harm. She coaches him to control his Obscurus and not be afraid of it, recognizing that it has its own beauty. In the other, she is ashamed that the skin on her hand is turning scaly and tries to hide it, but Credence kisses it, showing his acceptance of her whole self.

I wish the filmmakers had kept these scenes in the film. Putting them in the DVD extras means the fullness of this woman of color’s character was relegated to the margins. I hope we get to see Claudia Kim’s Nagini again in future installments. We know how Nagini’s life ends. I want to know as much as I can about the human she chose to be before then.

Lorrie Kim is the author of Snape: A Definitive Reading. She can be found at lorriekim.com or on Twitter @_LorrieKim_.

In the Pensieve Papers, Lorrie Kim, author of Snape: A Definitive Reading, delves into the richly emotional writing about the wizarding world, allowing us to reexamine the stories like memories in a Pensieve.
Want more posts like this one? MuggleNet is 99% volunteer-run, and we need your help. With your monthly pledge of $1, you can interact with creators, suggest ideas for future posts, and enter exclusive swag giveaways!
Support us on Patreon