The national governing body for quidditch in the United Kingdom, QuidditchUK, recently announced its decision to restructure its national team. Going forward, Team UK will not exist, but there will be Team England, Team Scotland, and Team Wales.

Over the past year, QuidditchUK have been working closely with our national team managers and the International Quidditch Association to create a system that allows England, Scotland and Wales to have better representation and competitive opportunities at not only European Games but also at [sic] the Quidditch World Cup as well.

Additionally, coaching and management positions are open for Team Scotland. This team isn’t entirely new, because both Team England and Team Scotland played in the 2019 IQA European Games. That’s why they already have their Muggle quidditch players. That won’t apply to Team Wales, which is entirely new. Team Wales is in the opposite position to Scotland. There is already Team Wales staff, Head Coach Chazz Mcleod, and Team Manager Lucy Nicholls, but they are looking for players. 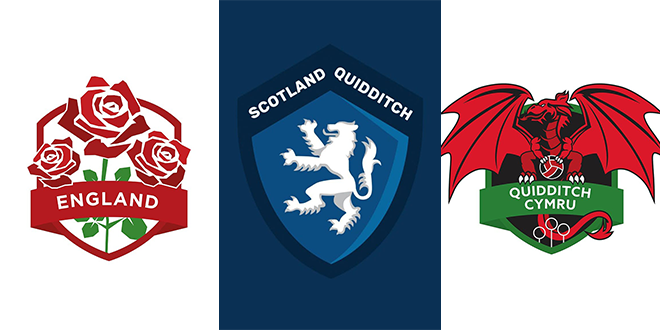 Each national team already has its own logo.

At the next IQA European Games or IQA World Cup, there will be three teams from the United Kingdom. Currently, it isn’t clear how seeding teams at IQA tournaments will work and whether the teams will be considered new, unseeded teams or if they somehow will inherit the Team UK position. Matt Bateman, president of QuidditchUK, explained in comments under the Facebook post that it depends on the IQA’s plans, and while they don’t want to announce anything yet, QuidditchUK intends for Team England to maintain Team UK’s status.

Alongside it’s [sic] powerhouse of athletes, Team UK has become the elite, prestigious option because for the longest time, it was the only one available. With that comes funding, availability for coaching, etc., etc.

In the short term, England will be the ‘stronger’ choice, but with the right moves we’re (hopefully) making in the next 5 years, that gap should close.