“Harry Potter” as My Gateway to Language Learning

One experience I shared with the golden trio was figuring out what classes to take when I was 12. However, instead of deciding on classes like Arithmancy or Care of Magical Creatures, I had to decide on language or tech classes. I decided to take Latin because I knew many of the spells in Harry Potter were rooted in Latin and learning the language behind the spells would help me better appreciate the books. I can confidently say that Harry Potter served as the gateway to my language learning because signing up for a language in order to fully geek out over the series began a life-long interest in learning languages.

I took Latin from eighth grade to my first year of university. Yet the more I studied Latin, the more unsatisfied I was about one aspect of language learning. I wanted to speak another language. But Latin is a language only spoken inside of a microstate, so classes emphasize reading and translating. Yet even though it is not spoken, knowing Latin helps build the vocabulary and grammar for other Romance languages, like Italian, French, Spanish, and Sicilian.

With that in mind, I decided to take French my senior year of high school and stuck with it through college. Being able to speak another language, even at a rudimentary level, was a new challenge because words are not pronounced phonetically very often in French, and sometimes the same word has different meanings. For instance, lis (lily), lis (the first-person singular for the verb “to read”), lit (the third-person singular of the verb “to read”), and lit (bed) are all pronounced “lee.” Yet being able to speak French is rewarding because I’m able to communicate with more people in different places across the globe and consume French culture and news in the native language.

In graduate school, I had the opportunity to take a summer Spanish course, which reinforced a lot of grammar and vocabulary lessons from the other two languages. Now I read Spanish newspapers, which helps me learn about the news going on in Spain as well as Central and South America. I likely would never have taken any of these opportunities to learn these languages if I had never picked up the Harry Potter books and wanted to learn more about the meanings behind the spells.

For me, the Harry Potter series also served as an introduction to languages that are not offered in North Dakota classrooms. When I was traveling across Europe, I would pick up copies of the Harry Potter books in various languages, like Italian and Flemish. Seeing something familiar in a different language has been a really good way to start learning the basics of the languages. Plus, it is fun to see how different languages translate magical parts of the story. For example, I picked up the Gaelic version of the first book when I was in Dublin. The earliest written records of the official language of Ireland date back to the fourth century CE, and so translating Harry Potter into Gaelic (or any other ancient languages) means not only navigating an ancient language for a modern world but a magical world as well. This means that sometimes instead of translating a word directly, one has to translate the spirit of the word. Slat draíchta means magical rod in Gaelic and is used for the word wand because there is no word that directly means wand, but there are words that come together with the same meaning of wand – a wooden stick that is capable of directing a person’s magic.

Overall, the Harry Potter books help people understand the pitfalls of prejudice and encourage readers to accept and appreciate people for who they are no matter their backgrounds. Learning languages also helps eliminate biases because you get to learn not just a language but more about the culture and the people that speak the language. It is fitting that Harry Potter ultimately spurred my interest in language learning, and I hope I am not the only one who seeks out learning experiences thanks to the series. As Dumbledore said to the students of Hogwarts, Beauxbatons, and Durmstrang, “Differences of habit and language are nothing at all if our aims are identical and our hearts are open” (GoF 723). One way for our aims to be identical is to learn more about the world by learning to speak another language. 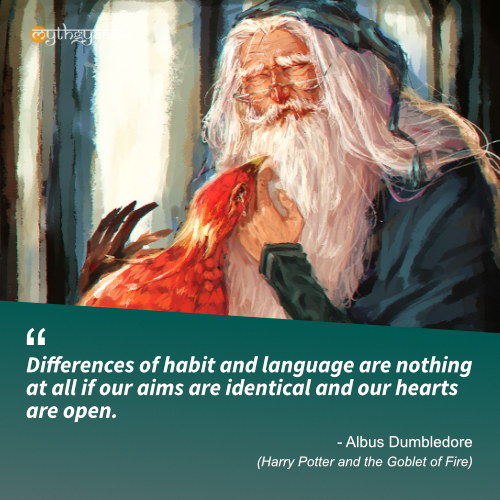