J.K. Rowling has said that Flourish and Blotts is the store she would most like to visit in Diagon Alley: “I think I would want to see those books more than anything else.” And it is, indeed, a store that is a celebration of bibliophilia: “They bought Harry’s school books in a shop called Flourish and Blotts where the shelves were stacked to the ceiling with books as large as paving stones bound in leather; books the size of postage stamps in covers of silk; books full of peculiar symbols and a few books with nothing in them at all. Even Dudley, who never read anything, would have been wild to get his hands on some of these” (SS 80).

Diagon Alley is not only full of books – the place where you go to buy spellbooks or meet authors such as Lockhart – but it is also, perhaps, modeled after Rowling’s own reading. Rowling loved Elizabeth Goudge’s Little White Horse growing up, extolling it as “a seamless mix of the fairy-tale and the real.” She has in fact gone as far as to name Little White Horse as her favorite childhood novel in at least four separate interviews. Given her love for Goudge’s work, it seems likely that Rowling would, at a later age, have read further in Goudge’s oeuvre. One of Goudge’s novels for adults – Towers in the Mist – shares in both Little White Horse’s charm and in its seamless weaving together of a fairy-tale romance with real – in this case historical – figures. It is a delightful imagining of the lives of the fictional Leigh family intertwined with true Elizabethan Oxfordians. And it does seem, to this reader at least, to have a number of Harry Potter links. There is, for example, a hard-working character with a touch of Hermione about him: “Sometimes he thought that Giles’s capacity for doing more work in one hour than most people did in three was not very good for him.” There is also a child with striking green eyes, whose inheritance of those green eyes from his parent turns out to be significant to the plot. There is also a shopping trip down Oxford’s High Street, which has more than a touch of Diagon Alley about it.

Many cities have claimed the inspiration for Diagon Alley as their own – in particular, Exeter’s Gandy Street and York’s beautiful Shambles (despite Rowling vehemently denying this claim). During a long Twitter thread debunking places that she claimed have not influenced her, Rowling went on to say that Diagon Alley was not “based on any real place.” But what about a fictional one? I’d like to stake a claim for the High Street of my own home city – Oxford – as the site for the inspiration for Diagon Alley but only in the fictionalized sixteenth-century version of it to be met with in Goudge’s Towers in the Mist.

Goudge describes a particularly evocative shopping trip when the Leigh children set off, like prospective Hogwarts students, down a street that is a veritable treasure trove of delightful shops. Goudge describes it as “an exciting place, full of strange smells,” and just like Harry stocking up on potion ingredients, the Leigh children likewise visit an apothecary: “‘The apothecary’s first,’ said Joyeuce.’I want some century and wormwood.’” Joyeuce uses century and wormwood to make a medicinal brew against the sweating sickness, and wormwood is, of course, perhaps the most famous potion ingredient in Harry Potter. Goudge underlines that one of the things about Oxford’s High Street in the sixteenth century which makes it such a pleasure to shop in is that each sells only highly specialized types of wares. This, of course, makes it distinct from most modern high streets but is something it shares with Diagon Alley:

It contained… really beautiful shops like the aurifabray, the mercery, the spicer’s and the glover’s. There were no multiple shops, where you could buy all sorts of different things under one roof, for Parliament had decreed that ‘artificers and handicraft people hold them everyone to his own mystery,’ and the Oxford Town Council enforced this law very vigorously.”

The children stand full of longing in front the aurifabray (the goldsmith’s) and gaze at the gold items on display:

Behind the small, iron-barred window one could glimpse wonderful things; cups and platters all made of gold, gold chains, billements, brooches to pin a gentlemen’s plumes into their caps, rings for the fingers and ears of fair ladies and little gold bells to be tied to the cradles of wealthy babies… The girls and Diccon gaped at these glories with round eyes of amazement.”

The very unusual word aurifabray is from aurifaber (Latin for “goldsmith”), and although no one other than Goudge uses it as an English word for a goldsmith, a number of sixteenth-century German Reformers used this Latinized version of their name rather than the more usual “Goldschmidt” (goldsmith). I doubt there is any direct connection with the Goldstein name that Rowling uses, but it is tantalizing that both Rowling and Goudge should be drawn to Germanic, goldsmithing surnames.

As we’ve discussed on a “Reading, Writing, Rowling” podcast episode, I think that the name Goldstein is crucial to the alchemical imagery of Fantastic Beasts. The Dictionary of American Family Names (ed. Patrick Hanks, OUP, 2003) gives the background of Goldstein:

Rowling has given the Goldstein sisters an alchemical surname for a reason. And quite a bit of Rowling’s interest in literary alchemy – as John Granger has argued in Harry Potter’s Bookshelf (2009) – may well have come from her childhood love of Goudge’s alchemical fairy tale, Little White Horse.

There is alchemy in Towers in the Mist likewise – sometimes quite literally. Walter Raleigh gets into trouble with the college authorities for the foul-smelling potions he is making in his rooms and is defended on the grounds that he is following in the footsteps “of the great alchemists of all time… searching for that Elixir that shall turn all hard metals, yea, even the hearts of reverend and learned men, to soft and merciful gold.” The true alchemy – in Towers in the Mist as in Harry Potter – is wrought by the transforming power of love:

He paused to look back at the towers and spires so delicately pencilled against the glorious dawn sky that curved above them in the semblance of a great circle. He felt a pang of pain to think that he must so soon leave it all, but yet he had at the same time a glorious feeling of permanence. Raleigh at the last had been quite right. Love was an unchanging thing, not an emotion but an element in which the world had its being. All the lovely things upon earth, beauty and truth and courage, were faint pictures of it.” (Towers in the Mist)

True alchemy is not about the love of gold but an understanding that what has true worth, the real “gold,” is love.

Harry, like the Leigh children staring at the decidedly unspiritual display at the aurifabray, is forced to resist the lure of literal gold in Diagon Alley. He both desires (and does not buy) a solid gold cauldron and a set of solid gold Gobstones. Hagrid stops him from buying the first, and in a tiny hint of his increasing heroism, Harry uses self-restraint to stop himself buying the latter two years later. Like the Leigh children gazing into the window of the aurifabray, however, one of the windows in Diagon Alley makes Harry passionately desire something he cannot have:

Price on request … Harry didn’t like to think how much gold the Firebolt would cost. He had never wanted anything as much in his whole life […] Harry didn’t ask for the price, but he returned, almost every day after that, just to look at the Firebolt.” (PoA 51–52)

Diccon longs for a ruby in the window of the aurifabray, and it seems an impossible dream. But just like Harry and the Firebolt, he will be magically gifted a ruby later in the novel.

Oxford’s Elizabethan High Street in Towers in the Mist, however, not only shares with Diagon Alley in its apothecaries, alchemical hints, and appealing window displays. It also has a pub which, like the Leaky Cauldron, is an entrance into a secret world. 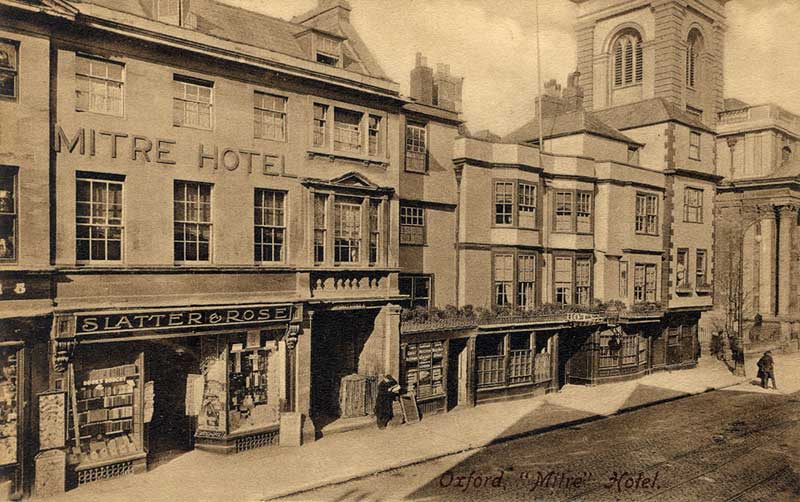 This is the Mitre Inn – one of the oldest pubs in Oxford. It was converted into an inn in 1310 and still stands over the network of medieval vaulted cellars that used to run under the houses from which the inn was formed. When Faithful and the twins enter the Mitre Inn, they see a chink of light through a cellar door, and upon entering this hidden space, it seems that “the fairy tale had come true.” This underground room full of gold and color and blazing light is in fact a secret Catholic chapel (forced underground due to the Elizabethan settlement). And in this secret place, Faithful’s dreams come true. He longs to be a scholar at Oxford, and Edmund Campion (who is the priest of this chapel) gives him a magical gift of gold and reveals a friend’s identity, which enables Faithful to realize his dream.

The secret chapel under the Mitre Inn, like the Leaky Cauldron, is a place that the uninitiated cannot even see. But it’s the place where Faithful, like Harry, finds the entrance into a new, wondrous reality:

He was a scholar of Christ Church. He had got what he wanted and he was so utterly and completely happy that he felt as though he had been born again… Nothing in life, he thought, is so lovely as fresh beginnings, and nothing breeds more courage.”

One connection between Faithful’s dream of scholarship and Harry’s entrance into a magical world is that both are enabled through books.

But there is perhaps a pleasing twist to all this celebration of bookishness on Harry Potter Book Night. For the college which Faithful enters is, literally, the place that Harry enters – although only in the Harry Potter films. For Christ Church, Oxford, the magical home of Faithful’s dream is – of course – the place that became Hogwarts on film.