A brand-new New Zealand Mint coin has been released, and this Harry Potter coin comes in the form of the much-loved Dobby the house-elf.

Like the recently released Lord Voldemort coins, Dobby’s also comes in the form of a gold and silver coin, making it a member of the Classic Collection rather than the Chibi Collection.

The coin features Dobby the house-elf, whose introduction at the beginning of Harry Potter and the Chamber of Secrets involved him warning Harry that he shouldn’t return to Hogwarts for his second year.

With Harry refusing to listen, Dobby has to take matters into his own hands. He runs downstairs, levitates a rather delicious-looking pudding over to his aunt and uncle’s house guests, and drops it on Mrs. Mason’s head (though those who have read the book will know that book Dobby wasn’t quite so harsh because he merely let it drop on the floor!).

The moment captured on the New Zealand Mint coins happens just after this. Dobby clicks his fingers and vanishes (or as wizards would say, Apparates), leaving Harry to take the blame. 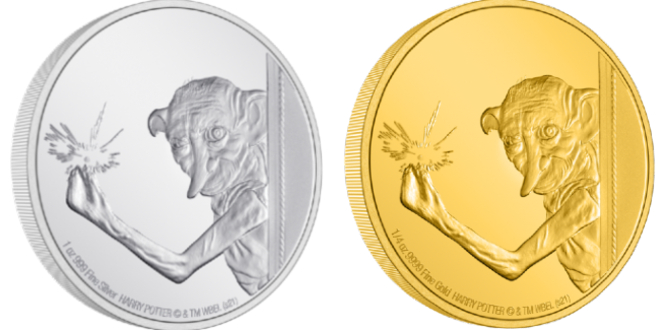 Take a look at the video below for a closer look at the coins. Will you be counting your Galleons to buy one, and what other Harry Potter characters would you like to see appear in the Classic Collection in the future?