The Accio!Box “Ron” Box Is Full of Unique Items! Get 15% Off TODAY!

When you think of Ron Weasley, what potential merchandise items come to mind? There are so many possibilities, and the folks at Accio!Box did an excellent job of encompassing many of Ron’s main story arcs and character development moments into their latest subscription box.

The “Ron” Box is the second in the six-box “Golden and Silver Trio” series from Accio!Box, celebrating Harry and his closest friends. Ron’s box succeeds the “Hermione” Box from last month. It’s not too late to jump in on the series! Accio!Box is currently taking orders for the “Harry” Box, which is up next.

Use the code MuggleNet15 at AccioBox.com to get 15% off your first box!

Here’s a look at the items included in the “Ron” Box. 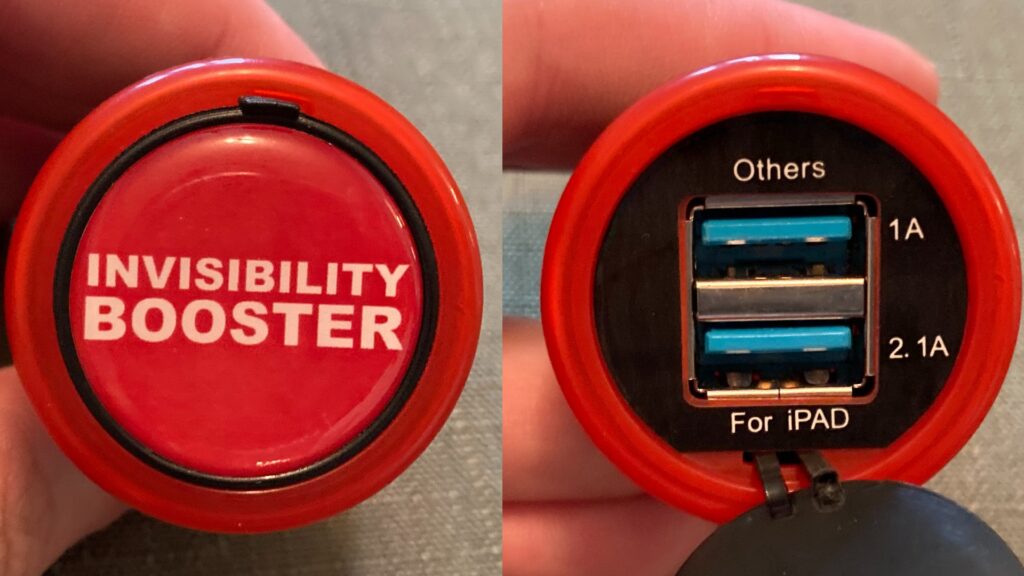 Accio!Box tends to keep adult fans in mind when curating their boxes, so many of the items included are not just fun, but also useful. This USB charging port can plug into your car to keep you powered up… as long as it doesn’t go faulty like the actual Invisibility Booster button on Mr. Weasley’s flying Ford Anglia. The charger is an Accio!Box exclusive valued at $6. 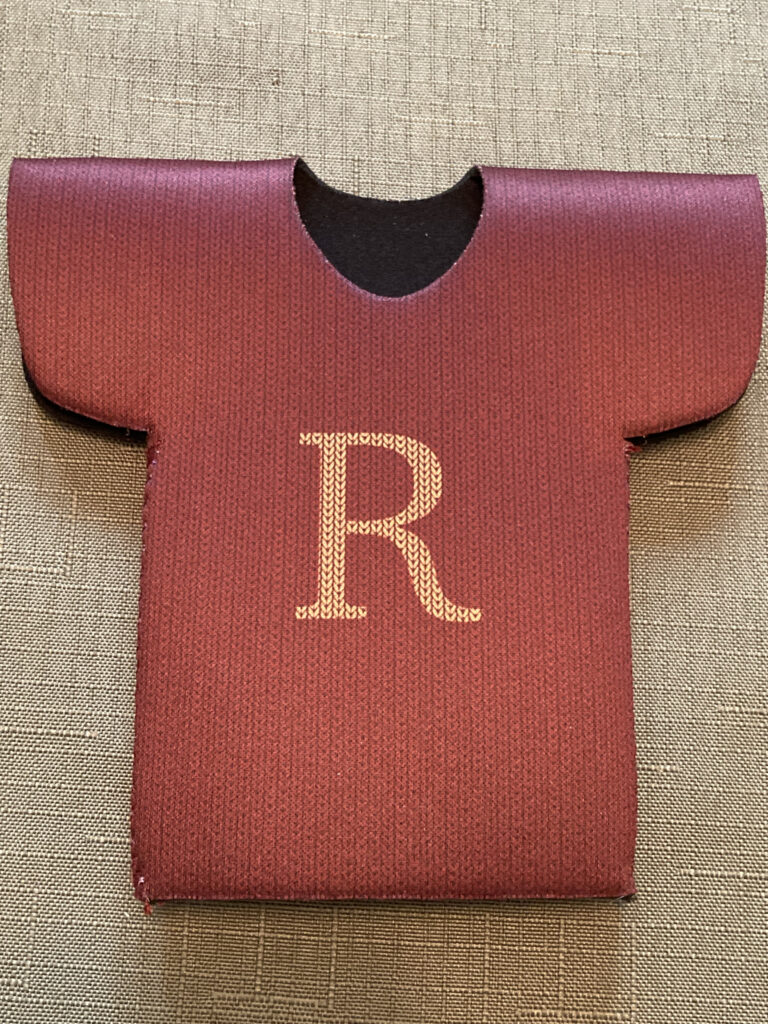 Valued at $5, this bottle cooler is a fan favorite that Accio!Box brought back from a previous release in 2017. It’s perfect for nerding up a tailgate party. Accio!Box is vegan and cruelty-free, so you can have confidence in the materials in items like this bottle cooler. I probably won’t use this item as much as the other things in the box, but I think this is a clever way to incorporate the Weasley sweater design. 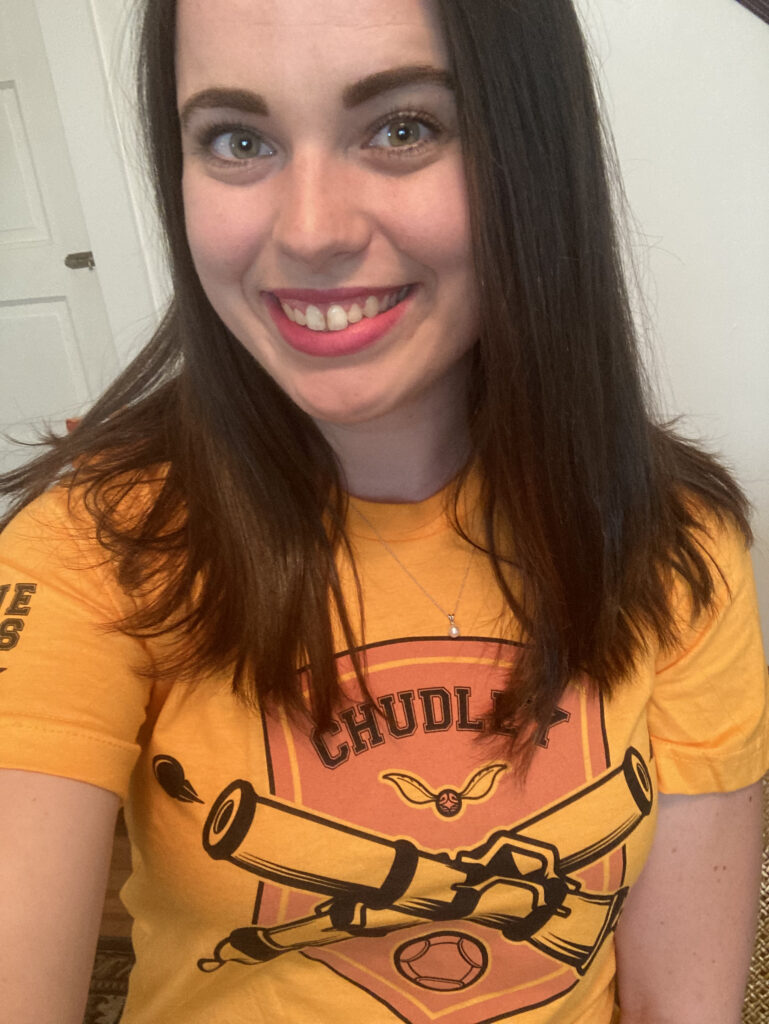 How can you have a Ron-themed box and not include something from his favorite Quidditch team? This T-shirt is inspired by the Chudley Canons. The design is printed on a super-soft, orange, Bella-Canvas tee with a retail value of $25. I appreciate that Accio!Box did not skimp on the quality of the T-shirt. Bella-Canvas is a nice shirt. It’s not your average bulk-order tee with stiff fabric and a plastic design.

When you order a subscription from Accio!Box, the form asks for your shirt size and Hogwarts House for when items like this one are included in the box. 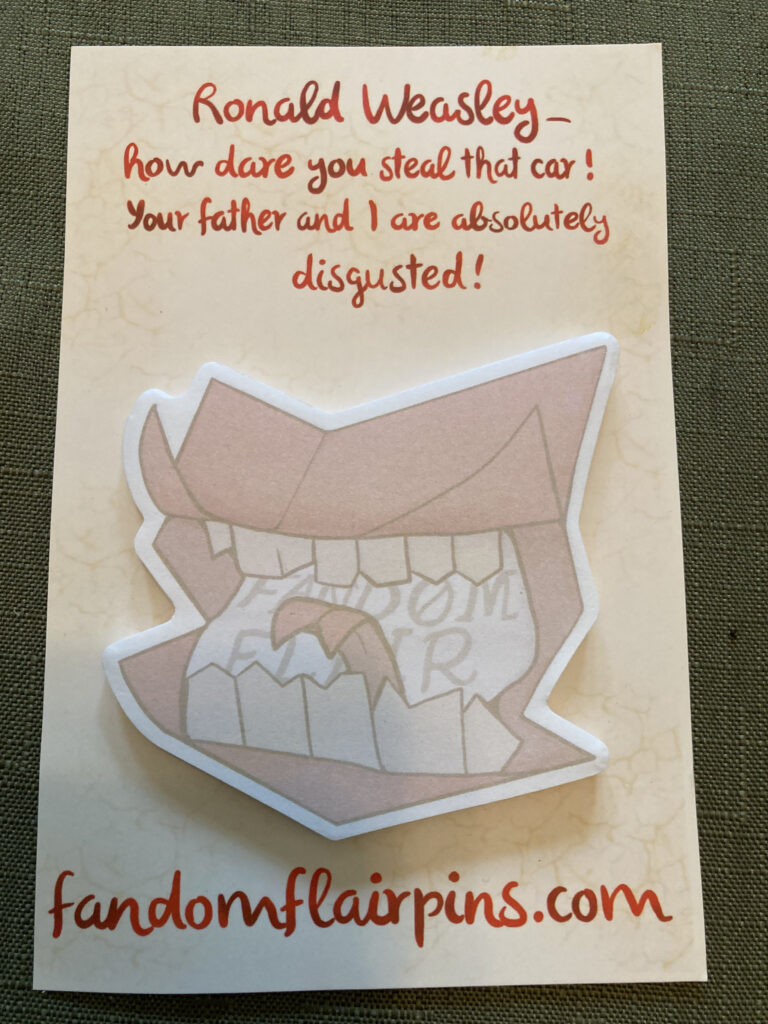 I plan to use these Howler sticky notes to leave messages for my coworkers, but they could also be useful for those of you who have roommates. These sticky notes are made by Fandom Flair. Accio!Box supports fan creators by including items from different artists in their boxes. The sticky notes are valued at $4.50. 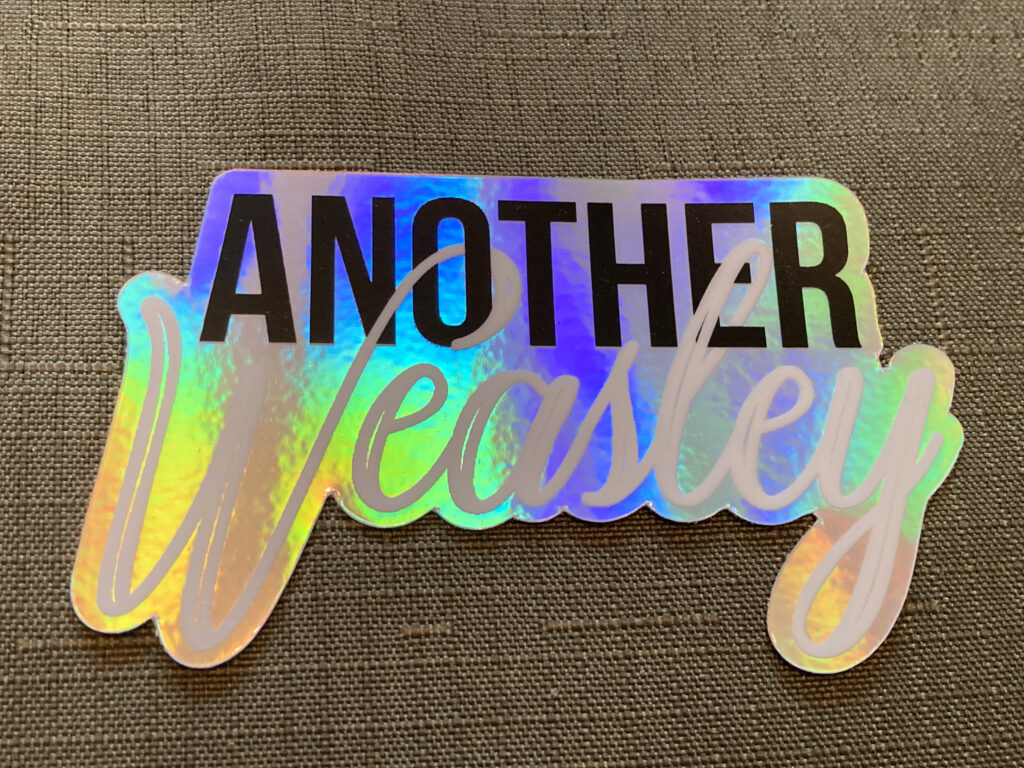 Stick this Accio!Box exclusive on your laptop or notebook for a little added personality. This sticker is holographic, shining, and color-changing depending on the way you look at it. It has a retail value of $5. 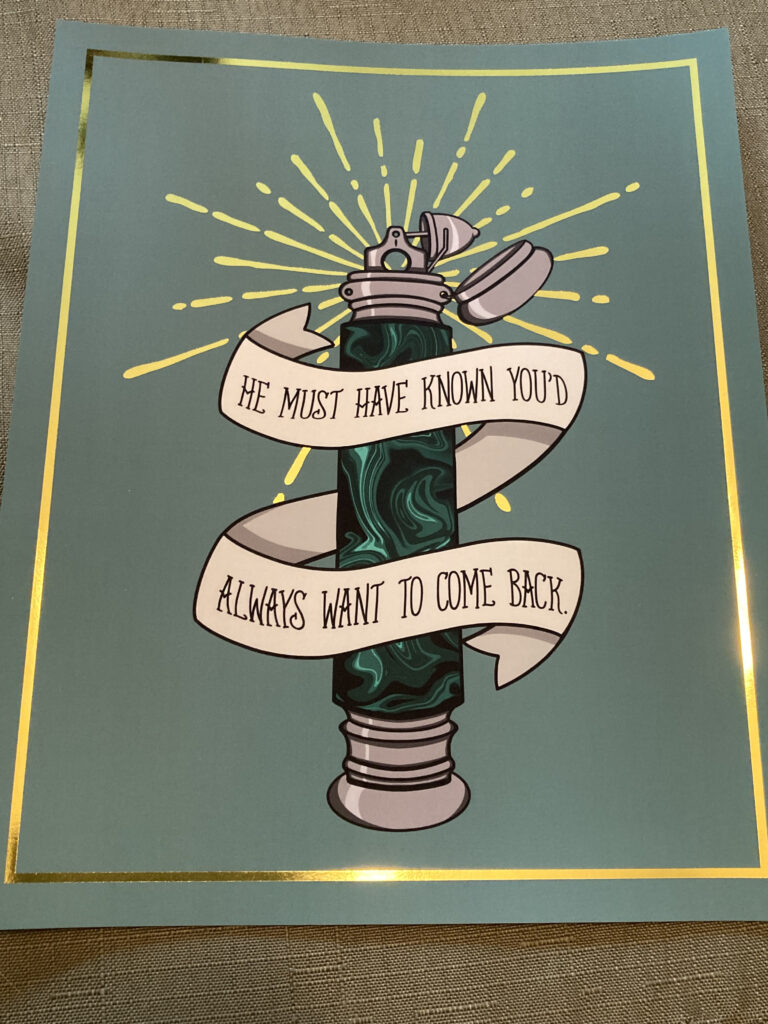 This Deluminator art print features the quote, “He must have known you’d always want to come back.” Those are the words Harry says to Ron when the latter says Dumbledore must have left him the Deluminator with the knowledge that Ron would desert Harry and Hermione. Harry assures Ron that isn’t the case. Harry says quite the opposite, that Dumbledore would have valued Ron’s loyalty and known that he would always want to come back to his friends and finish what he set out to do. The art print is 8 by 10 inches and valued at $12. 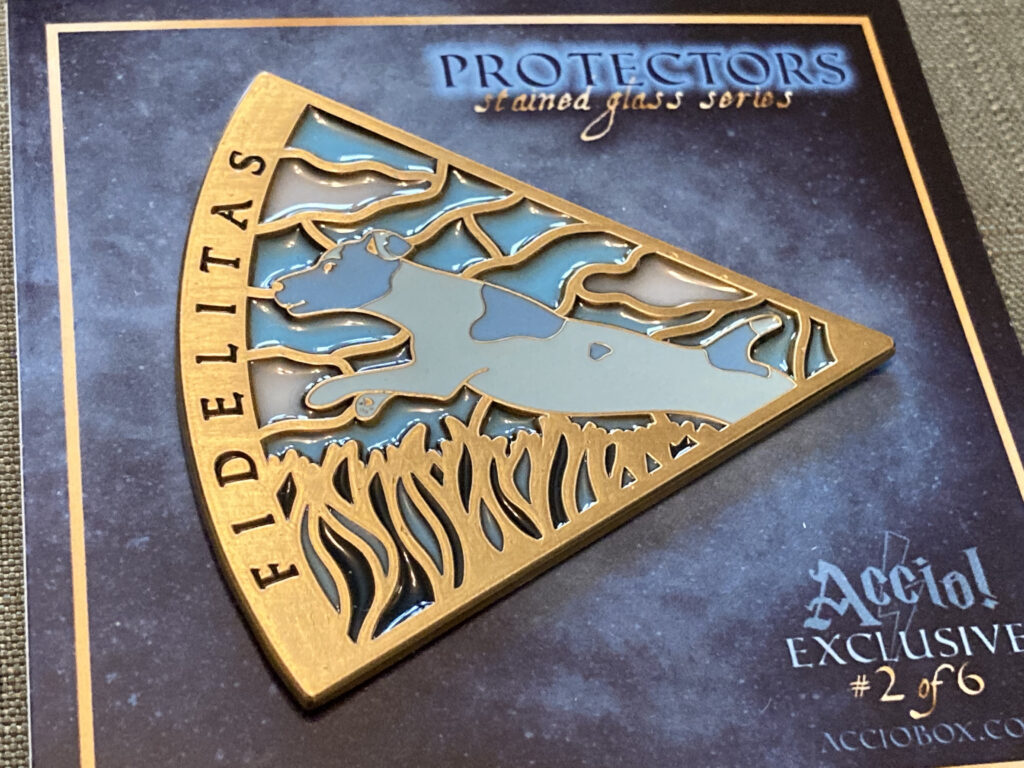 Each box in the Golden and Silver Trio series comes with a collectible “Protector Stained Glass Pin.” Each pin features the Patronus of the character whose box it’s in. In this case, the pin design includes Ron’s terrier Patronus. Each pin is in a wedge shape. When all six are collected, they can be placed together to form a full circle. Accio!Box is currently taking preorders for a display piece to hold all six pieces. Details can be found on their website.

If you missed out on the Ron or Hermione boxes, Accio!Box often puts up past boxes for sale on their website. The next box in the series is Harry-themed, so if you sign up for a subscription now, you will receive a box full of items inspired by the Boy Who Lived himself.

A Ron box was provided by Accio!Box. All opinions belong to the reviewer. Discount valid with a month-to-month subscription.