Welcome to this week’s Casting News! We’re all out of trailers after the three we showed you last time, but we do have exciting roles for Julie Walters and Kelly Macdonald, as well as a trip to Gotham City for Jason Isaacs. Castium Revelio!

First up this week we have an announcement from Kelly Macdonald (the Gray Lady). She will star alongside Hugh Bonneville and George Mackay in Netflix’s upcoming thriller I Came By. The film will follow a graffiti artist who uses the houses of the wealthy as his canvas. However, he comes across a shocking discovery that takes him on a dangerous adventure. The film will be released in November 2022, but we’ll keep you updated as more details on the movie are released.

We have a release date for Jessie Cave‘s (Lavender Brown) new show, Buffering. The show, which is a semi-autobiographical comedy surrounding the life of Love Island narrator Iain Stirling, will premiere on ITV2 on Thursday, August 5. Are you going to check it out? 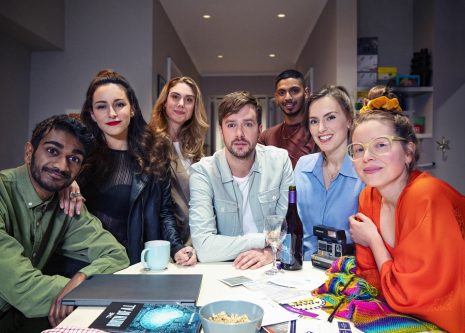 Jason Isaacs (Lucius Malfoy) will join the DC Universe. He stars as Alfred in Spotify’s upcoming podcast series Batman Unburied. The series is a dark psychological thriller that will delve into the mind of Bruce Wayne. A host of well-known villains will be joining Isaacs and costar Winston Duke throughout the series.

Emma Watson (Hermione Granger) has taken to saving the world in a different way. She has teamed up with several other celebrities to help fund a small startup in London that aims to make plastic in a more sustainable way. The company, which is called FabricNano, does this by taking the chemicals that are stored within living organisms and manufacturing plastic with them. Its first product is a forerunner for biodegradable plastic.

We’ve got exciting news for North American fans of Bill Nighy (Rufus Scrimgeour). His latest film, Buckley’s Chance, will be distributed across the continent, courtesy of Vertical Entertainment. The distributor recently gained the North American rights to the family drama film, which follows the lives of 12-year-old Ridley and his canine companion as they journey through the Australian Outback in hopes of finding their way home.

Last up this week is a new role for Dame Julie Walters (Molly Weasley). She joins Hugh Dancy and David Harewood in the cast of Channel 4’s upcoming Christmas animation The Abominable Snow Baby. The special is based on a short story by Sir Terry Pratchett and will follow the adventures of Albert and his Granny (played by Walters) as they try to rescue their town from a snowy monster.

That’s a wrap on this week’s Casting News! Which of these Harry Potter actors are you most excited to see in their new roles?