Out of all the characters in Harry Potter, Aberforth Dumbledore is one that really needed a vacation. Ciarán Hinds swapped his wizard hat to a comfy summer hat in The Man in the Hat, a quirky indie film that premiered just last year. His remarkable lead performance earned him a nomination at this year’s Irish Film & Television Academy (IFTA) Awards, which came as a pleasant surprise to him.

The Man in the Hat is a heartwarming and hope-affirming comedy that takes us on a whimsical road trip in sunny France. It is the directorial debut of composer Stephen Warbeck, so it comes as little surprise that Hinds was joined by a cast full of various talents: British tenor Mark Padmore; actress Muna Otaru (Lost); French actress, screenwriter, and director Brigitte Roüan; filmmaker and actress Maïwenn Le Besco (The Fifth Element); and Stephen Dillane (Game of Thrones), an actor who has a Harry Potter connection in his own right through his son Frank (Tom Riddle in Harry Potter and the Half-Blood Prince). The movie’s vintage feel and charming atmosphere make for the perfect bit of escapism.

Although this is the actor’s 10th IFTA nomination, this year’s nod for this leading role came as a bit of a surprise for Hinds: “I’ve been so far removed, actually, from that whole part of the business. I still am a bit, if I’m quite honest,” he said in a recent interview.

The 17th IFTA Awards were held on July 4. Colin Farrell (Percival Graves in Fantastic Beasts and Where to Find Them) appeared as a presenter on the night, and in addition to Hinds, Brendan Gleeson (Mad-Eye Moody in the Harry Potter films) was also among the nominees (for The Comedy Rule). Known to many from Derry Girls, Nicola Coughlan was awarded for her standout role as Penelope Featherington in the Netflix smash hit Bridgerton (featuring Cormac McLaggen actor Freddie Stroma), but the night’s favorite was Normal People, which won in 9 out of the 15 categories in which it was nominated.

Hinds had to do some catching up on account of the award ceremony:

I went through the shortlist and thought, ‘Well, there’[re] a lot of young fellas here, and I have no idea who they are.’ And that’s fantastic because of the amount of quality. But then, I should be watching more.

Last year, I had time to watch a lot of stuff and I was aware of what was going on, but this year it didn’t happen at all, so I remain a little in the dark. They’ve chucked a couple of old-timers in there, myself and Gabriel [Byrne], to balance it out from these young, gym-muscly hunks. Oh, I know who’s in there – Moe Dunford. That beautiful film he did, Rosie. Terrific in all respects. 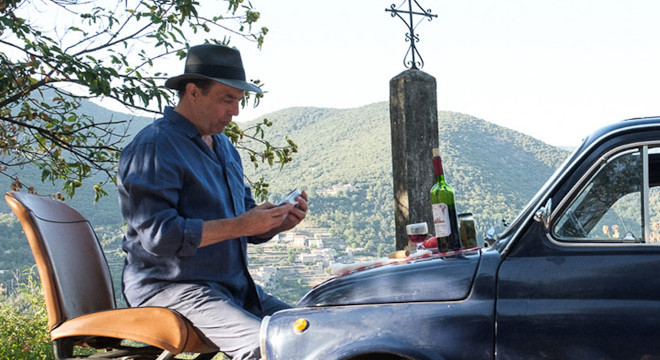 Ciarán Hinds enjoys a lunch with a view in “The Man in the Hat.”

If Hinds really means to catch up on some new titles, we recommend starting with the aforementioned Derry Girls and Normal People. Both of these series star his daughter Aoife, who also pops up in The Man in the Hat.

Hats off to Hinds. You can still join the ride on Amazon Prime.