Fantastic Beasts and How to Save Them: Ice Age Dragons, Shakespeare, and More from the London Natural History Museum’s “Wonder of Nature” Exhibit

In May 2021, the London Natural History Museum exhibition Fantastic Beasts: The Wonder of Nature reopened (after the delays inseparable from trying to mount a show in 2020). It is an exhibition organized around Newt Scamander, a Magizoologist, who plays only a bit part in Harry Potter, but – as J.K. Rowling has written – is someone who had long captured her imagination:

I do remember thinking that if anything ever came of it [Warner Brothers’ optioning of “Fantastic Beasts”], I’d have to make sure they got Newt Scamander right, because even though he never appeared except as a name within the Potter books, I knew a lot about him. He’d captured my imagination while I was writing his little book. I envisioned a doggedly different, awkward man who was at a loss with humans but phenomenally skilled with beasts. “

One of the signs of how early Rowling became captivated by Newt is that, long before the film franchise began, she’d decided that his grandson should marry one of Harry Potter’s most appealing characters: Luna Lovegood.

This exhibition brings together Rowling’s fantastical beasts with real ones from the museum’s collections in two main ways. The first half of the exhibition is historical, featuring the real animals that were mistaken for fabulous beasts, such as dragons, unicorns, or mermaids. The second half is comparative and introduces us to real-life creatures that have some of the same characteristics – such as shape-shifting or a penchant for shiny things – as Rowling’s fantastic beasts. I learned, for example, that marine iguanas can shrink and increase their size (just like the Occamy). 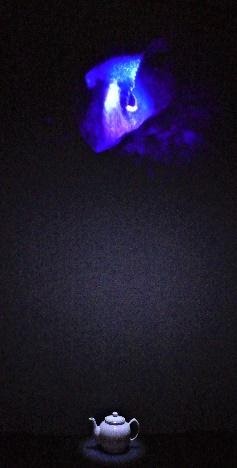 This representation of the Occamy can be found in the Wonder of Nature exhibit. This photo was taken by Dr. Beatrice Groves.

The exhibition has been staged in collaboration with the visual effects company Framestore (who worked on the Harry Potter films). Framestore gets around the problem of how to portray fictional beasts with brilliantly creative interactive versions, which children (and the young at heart) will love. There are also a number of familiar film props around, so you can read about whether mermaids were really manatees while gazing into the seductive depths of the golden egg from Harry Potter and the Goblet of Fire. 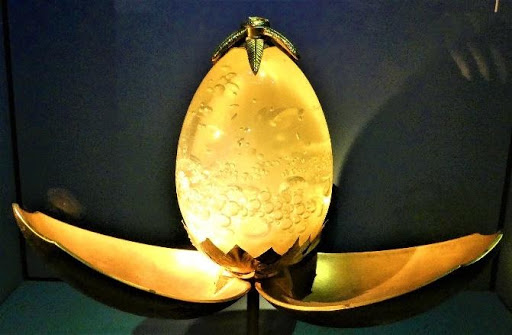 This prop replica can be found in the Wonder of Nature exhibit. This photo was taken by Dr. Beatrice Groves.

Among the fantastical beasts on display here are Mooncalves – a creature which may have been inspired by Shakespeare. Newt’s great-grandson, as you may remember, is called Lysander – and he is named after a lover in Shakespeare’s A Midsummer Night’s Dream, a play that (as I have argued elsewhere) has strongly influenced the Fantastic Beasts franchise. I was particularly pleased, therefore, to find what I think is a Shakespearean-inspired beast in this exhibition. “Mooncalf” is not a common word in modern English, but it does turn up repeatedly during some shenanigans in The Tempest. Two people decide to hide under one coat and are then mistaken for “some monster of the isle, with four legs” named a “moon-calf” (The Tempest, 2.2.64–5). This “moon-calf” – consisting of Caliban and his gabardine along with Trinculo’s skinny “lesser legs” – dances around the stage, and I suspect it lies behind Rowling’s description of her Mooncalf with its smooth grey body, “four spindly legs,” and “complicated dances in isolated areas in the moonlight.”

One of my favorite parts of this exhibition was the discovery of how important fossils were to early lore about fantastic beasts. An Ice Age woolly rhinoceros skull, for example, unearthed in 1335 near Klagenfurt in Austria, was taken as evidence for the existence of the lindworm (a form of a flightless dragon). This skull was used as a model for the head of Klagenfurt’s Lindwurm Fountain, often considered the earliest reconstruction of an extinct animal.1 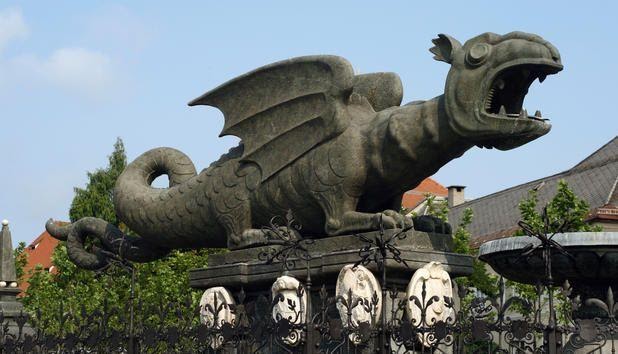 This is the Klagenfurt Lindwurm Fountain in Austria.

The exhibition likewise has a pharmacy jar (that looks like it would be right at home in Snape’s potions cupboard) filled with what was believed to be unicorn bone or horn but which are, in reality, shards of fossilized prehistoric woolly mammoths.

These woolly mammoth fossils can be found in the Wonder of Nature exhibit. This photo was taken by Dr. Beatrice Groves.

Animals conjured out of nothing but human creativity sit alongside animals that may soon be annihilated by human destructiveness, and the exhibition finally turns its attention to the real-world animals that visitors might be inspired (like Newt) to try and save. There was a lovely circularity here for me since one of these animals is the kakapo – the green, flightless parrot of New Zealand. I first read about this charming bird in 1990 in Douglas Adams and Mark Carwardine’s Last Chance to See (a book which, incidentally, was Adams’s own favorite of his works). The chapter about the kakapo made me assume that the next time I heard about them, it would be because they had become extinct. There were only 40 birds left, and they seemed spectacularly bad at reproducing themselves:

The ways in which it goes about mating are wonderfully bizarre, extraordinarily long drawn out and almost totally ineffective… [and] the net result of all these months of excavating and booming and walking and scrarking and being fussy about fruit is that once every three or four years the female kakapo lays one single egg which promptly gets eaten by a stoat.” (Adams, “Last Chance to See,” 110–12)

I was delighted to visit the exhibition and learn more about the kakapo in part because I had just finished writing up some links between Rowling and Douglas Adams. But also because upon rereading Last Chance to See, I discovered that the warden of the island Adams visits is called Dobby. Best of all, however, was the news provided by the exhibition that Adams’s visit was something of a turning point for the bird. Far from becoming extinct, the painstaking work of those who are working tirelessly to save them has meant that the number of birds has more than quadrupled in the intervening 30 years. At the time of the writing, there are 202 kakapos. Newt would indeed be proud.

Dr. Beatrice Groves teaches Renaissance English at Trinity College, Oxford, and is the author of Literary Allusion in Harry Potter, which is available now. Don’t miss her earlier posts for MuggleNet – such as “Solve et Coagula: Part 1 – Rowling’s Alchemical Tattoo” – all of which can be found at Bathilda’s Notebook. She is also a regular contributor to the MuggleNet podcast Reading, Writing, Rowling.