How Hogwarts Failed One of Its Own

CONTENT WARNING: This post discusses violence against women, suicide, and themes that may be distressing to some readers.

A common sentiment in the wizarding world is that nasty things are often afoot in Slytherin House. And look, oftentimes they are. Nothing good usually comes from an underground bunker void of natural light (SAD, anyone?) where passwords such as “pure-blood” are commonplace. However, as we know, there is darkness and light in everything, and today, we turn the lights toward Ravenclaw Tower to explore the darkness within.

I am, of course, talking about Helena Ravenclaw – the daughter of House founder Rowena – her tragic murder, and the trauma that reverberates in empty hallways and dark corners of Hogwarts.

There’s something about gender-based violence that is extraordinarily tragic yet so unnervingly pedestrian. According to the UN, in the Muggle world, “six women are killed every hour by men around the world, most by men in their own family or their partners.” Whilst this type of violence is decried, it endures without meaningful intervention by the systems/processes that could be amended to improve these outcomes. The underlying sentiment is that the murder of women simply is a fact of life. And the wizarding world is no different.

The way we learn about Helena’s life and the circumstances of her death is fraught with complexity and does her a disservice when it is glossed over due to the unfolding battle. 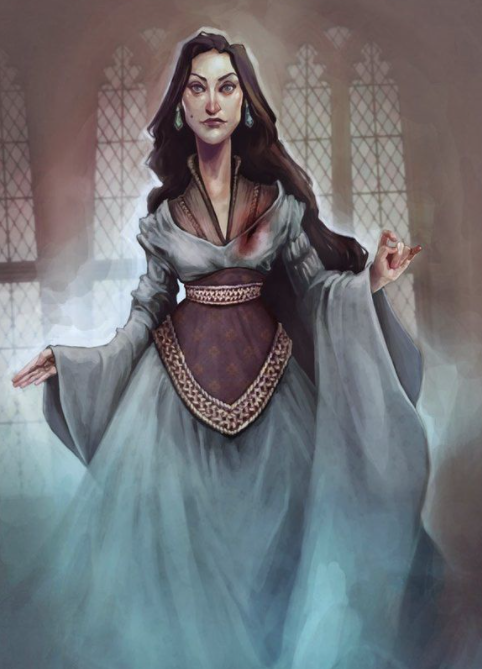 So who let Helena Ravenclaw down?

Firstly, and most inarguably, the person responsible for Helena’s murder is the Bloody Baron. He alone murdered her, and he alone is responsible.

The entitlement he felt to possess her fueled the rage that led to his actions. Rejection violence is not an uncommon occurrence. Helena rejected him, so he murdered her. It’s the old “if I can’t have you, no one can” approach. In her thesis, “Danger Of ‘no’: Rejection Violence, Toxic Masculinity And Violence Against Women,” Lily Thacker explains how this type of violence is not unusual.

Rejection violence is not a phenomenon to be taken lightly, and its relationship to toxic masculinity cannot be ignored. […] The guidelines for adequately performing masculinity in a heteronormative system largely revolve around sexual and/or romantic success with women.” (p. 2, 12)

Having murdered Rowena, the spurned Baron also takes his own life by suicide, allegedly driven mad by guilt and shame. Is this justice? Did the Baron pay this price for his crime? Pottermore seems to think so.

In an article titled “The terrible tale behind the Bloody Baron’s bloodiness,” the Baron is described as wearing “the chains he clanked so loudly as penance for a crime of passion committed centuries ago.” Throughout the novels, the Bloody Baron has an air of intrigue that surrounds him. He is, indeed, rumored to wear chains in penance for his crimes, but details remain unknown – even amongst his fellow ghosts.

Pottermore: The Terrible Tale Behind the Bloody Baron’s Bloodiness

Little information is available about the specifics of Hogwarts ghosts, such as who appoints them and how long their tenure runs. It is implied, however, that the gig is fairly permanent. The question then remains how Hogwarts as an institution chose to allow the perpetrator of such a heinous crime not only to remain in the castle at all but to have a position of reasonable honor and prestige and – mind-blowingly worst of all – alongside his victim. Rowena Ravenclaw herself sent the Baron to track her daughter. Was she aware of the danger he posed? And how, upon learning that the man took the life of her only daughter in an act of heinous entitlement, did he secure a future in the hallowed halls of learning and protection Rowena herself co-founded? For a woman whose reputation endures as a symbol of the greatest of wisdoms, the sheer incomprehensibility of this outcome is staggering.

The Grey Lady is the ghost we hear the least about through the books and can therefore be considered reserved. At one point, the House ghosts all perform together as holiday entertainment, serving as an example that Helena never escapes being near her murderer. Compare this with the Baron’s experience: He sails through a prestigious school in a leadership position, unquestioned and with the nature of his crimes a complete secret. Was he ever officially held to account for his crimes? Has he atoned for his crime against Helena, or is he simply having an eternity-long sad that he also killed himself in a fit of petulant rage? How would the Slytherins feel about his past? How would the Ravenclaws? How would Hermione?

For many who decry this brand of commentary about Harry Potter and hold dearly the mantra that it’s all just a story, we need to be mindful of what stories convey to us. The magic and the hope that transports us off the pages into safe realms of imagination and adventure also inform and impress upon us when they’re weaving stories of fear and pain. The clear message in these haunting recollections of Helena Ravenclaw is that something somewhere failed. And just like in the non-wizarding world, that something – or many somethings – is a tangled mess of institutions, systems, and people who were tasked with keeping her safe. What we are left with as we hone in on the details of this tragic tale are more questions about how such an obviously horrific outcome could be so easily deemed acceptable.

When we draw moral lessons about good and evil and especially when we promote them to our children, it is not only important what is named as evil but equally important what is left out and what is allowed to exist unchallenged. Whether we’re reading what is on the page or between the lines, the message should never be the one conveyed in this dark chapter of Hogwarts history.