It’s not quite as confusing as the Battle of the Seven Potters, but a man named Harry Potter is the owner of a rare Harry Potter book that will be auctioned off by Hansons Auctioneers next month.

According to a press release from Hansons, the real Harry Potter is not a wizard, but he is a 33-year-old sales manager and father of three from Hampshire, England, who has spent much of his life having to convince people that he really does share his name with a fictional character.

‘People just don’t believe me,’ said Harry, a dad-of-three from Waterlooville, Hampshire. ‘When I was a young footballer, a referee threatened me with a red card for saying my name was Harry Potter. When I met my wife, Philippa, (30) on holiday in Greece, she didn’t believe me either. People think it’s a wind up [sic]. I’ve had the Mick taken out of me over the years, but you get used to it.’ 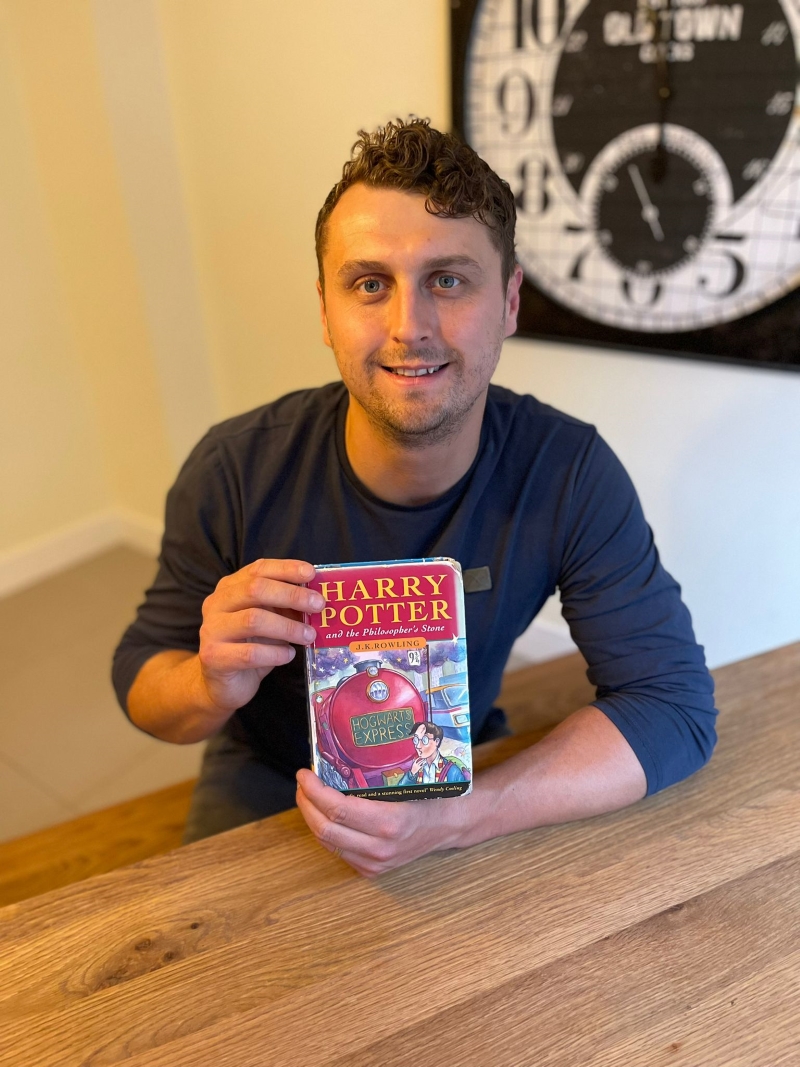 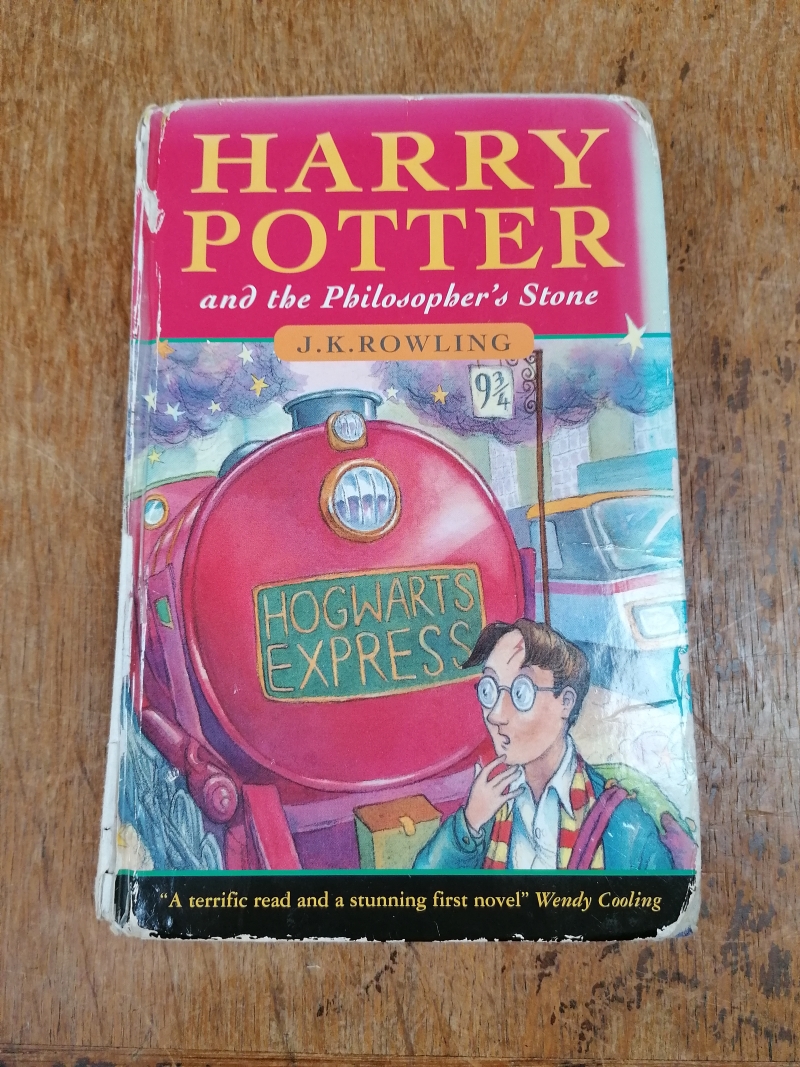 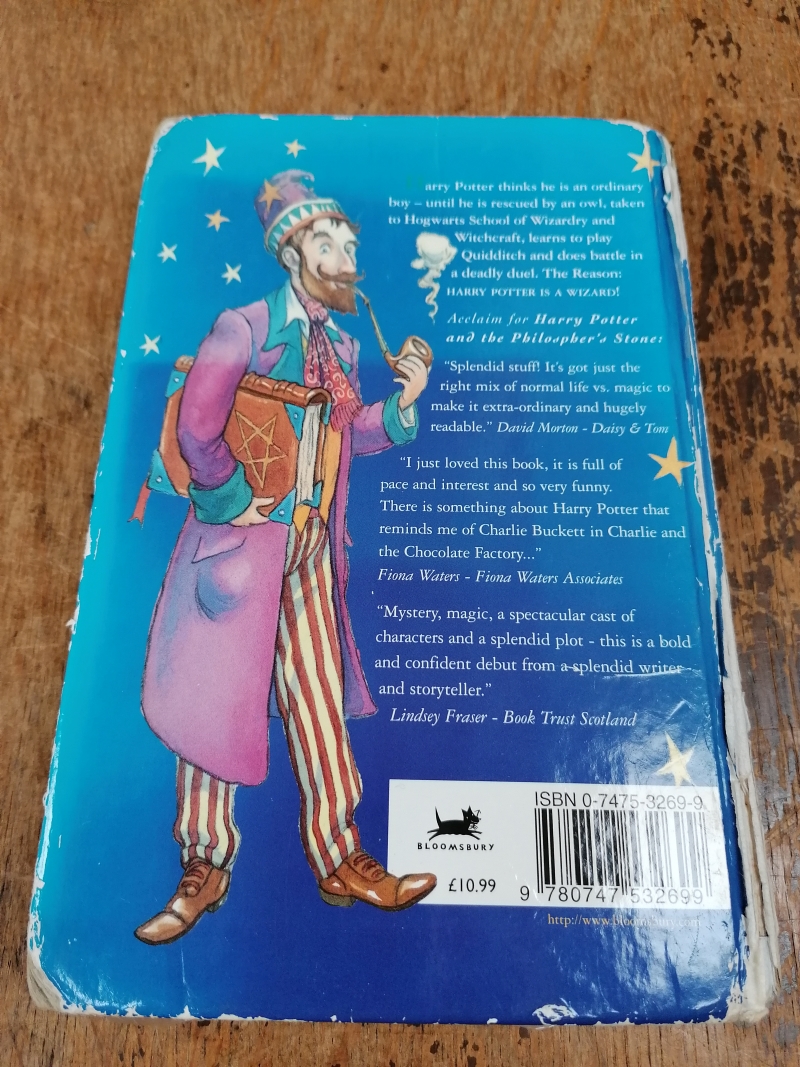 Potter’s first-edition hardback copy of Harry Potter and the Philosopher’s Stone was purchased by his late father in 1997 because his then eight-year-old son and the main character happened to share a name. Potter’s sister, Katie, also spoke about what the book has meant to their family.

The novelty and coincidence of the namesake was what made us open that first book, but the magic of the story kept us turning the pages for years. Harry was eight and I was 12 when we first read the books together. I would read aloud, and despite calling Hermione ‘Hermy-one’ until at least half way [sic] through The Chamber of Secrets, my Dobby impression is second-to-none [sic].

This copy of Harry Potter and the Philosopher’s Stone will be sold at auction by Hansons Auctioneers on October 7. Due to protocols surrounding the COVID-19 pandemic, this auction will be held online. You can find more information about the auction in the press release below.

And he plans to turn the fun gift, bought by his flabbergasted dad when it was published in 1997 due to the name coincidence, into a lasting legacy. Proceeds from the sale of the hardback book will be used to honour his late father. The hardback copy, one of only 500 in the first print run, is due to be sold at Hansons Auctioneers on October 7, guide price £20,000-£30,000.

Harry, a 33-year-old national sales manager, was eight when the first Potter book came out. Thanks to Pottermania, he’s spent the last 25 years trying to convince people his name really is Harry Potter.

“People just don’t believe me,” said Harry, a dad-of-three from Waterlooville, Hampshire. “When I was a young footballer, a referee threatened me with a red card for saying my name was Harry Potter. When I met my wife, Philippa, (30) on holiday in Greece, she didn’t believe me either. People think it’s a wind up [sic]. I’ve had the Mick taken out of me over the years, but you get used to it.

“I’m quite outgoing, and I’ve handled it pretty well; plus, it has its pros. When I was 12 and the first Potter film was released, we were invited to be [F]amily of the [W]eek on the Big Breakfast TV show. I met lots of stars, including Gwen Stefani and Ben Stiller.

“My current boss, Steve Barrett at Diamond Cut Refinishing Ltd, assumed my surname was Shaw because that’s my mum’s new married name and she works for him. When he found out I’m called Harry Potter, he said he should have paid me more because people would always remember me.

“When you ring someone up and they ask your name, they usually dissolve into laughter or say ‘you’re joking’. It makes making a complaint quite difficult!”

Proceeds from the sale of the book will be shared with his sister Katie Sign, 36, an accountant and mum to Freddie, one, from Waterlooville. Being four years older than Harry, she has vivid memories of the book’s arrival at the family home in 1997.

She said: “I remember dad bursting through the front door after work brandishing a book, proclaiming ‘you’ll never believe what I’ve got!’ At first glance, we were confused. Had someone written a book for Harry? Our Harry Potter? Dad explained that he’d heard Terry Wogan mention Harry Potter on Radio 2, and once he had gathered Terry was referring to an award-winning children’s’ [sic] book – not his then eight-year-old son – he turned his van round, drove straight to Bay Tree Bookshop in Waterlooville and bought us a copy.

“The novelty and coincidence of the namesake was what made us open that first book, but the magic of the story kept us turning the pages for years. Harry was eight and I was 12 when we first read the books together. I would read aloud, and despite calling Hermione ‘Hermy-one’ until at least half way [sic] through The Chamber of Secrets, my Dobby impression is second-to-none [sic].

“The book had pride of place on the windowsill next to my bed and was eventually joined by the whole collection. They’ve stayed on a shelf or a windowsill in every house I’ve lived in for 20 years. It was treasure to us long before it had any value to the rest of the world.

“Our dad passed away at the age of 71 after a long battle with cancer in October 2017, and we love and miss him dearly. It was shortly after this we realised the old book we’d loved and treasured for 20 years was a sought-after first[-]edition copy. Our dad, David James Potter, was a wise and loving man who believed the richest people were those who lived life to its fullest and that experience had more value than money.

“Selling the book then, despite its financial value, was of no interest to us. It was one of few lasting, tangible treasures we had from our dad. So the book was retired to a protective sandwich bag in the cupboard under the stairs, and there it remained for four years.

“Over time, we realised the book had changed for us. We knew rare first editions were selling for tens of thousands of pounds. It wasn’t any longer something we could enjoy, or love, without fear of damaging it. We aren’t investors or collectors; we’re two grown-up kids who would like to enjoy life the way our dad prescribed – to its fullest. The book is the legacy dad left us to do that.

“With the proceeds from the sale, we would like to take dad’s ashes to Africa, the place he asked to finally rest, where we can make new and fantastic memories with our own children and families. After all, ‘it does not do well to dwell on dreams and forget to live’ - Albus Dumbledore’.”

Harry added: “We think now’s the time to use the money to benefit our families and do something dad wanted. I have three small children – Hugo, five, Arthur, two, and Maggie, 19 weeks – and Katie has Freddie. Funnily enough, Hugo and Arthur are both names of characters in Potter books, but the choice was accidental.”

Katie, who’s married to Olympic sailor Alain Sign, added: “Freddie’s middle name is George. We chose it because we thought it just sounded right. Later. we realised it sounded right because of Fred and George, the Weasley twins in the Potter books!

“Being Harry Potter’s sister has been hilarious – mad at times. When I told people my name was Katie Potter, they’d often say, ‘Have you got a brother called Harry’ and I’d have to say ‘yes’. I know there are one or two other Harry Potters in the UK, but as far as I’m aware, only a couple were given the name before the Potter books came out. I think my brother got national attention when he was younger because he was a similar age to the character in the book when it first came out.”

The hardback first issue of Harry Potter and the Philosopher’s Stone is due to be sold on October 7 at Hansons Auctioneers. To find out more email Charles Hanson: charles@hansonsauctioneers.co.uk.