On Saturday, I attended a panel at New York Comic Con about young adult graphic novels that included the authors Kami Garcia (Teen Titans), Shannon Hale and LeUyen Pham (Friends Forever), and E. Lockhart (Whistle: A New Gotham City Hero). They discussed the recent trends in the young adult graphic novel space and the importance of crafting captivating and compelling characters whom teens will enjoy reading about.

My first introduction to graphic novels was in college. I read Persepolis: The Story of a Childhood by Marjane Satrapi and Fun Home by Alison Bechdel. I had never even heard of either of them before, but they are some of my favorite books that I have read in my adult life. I loved having the pictures on each page to understand the emotion that the characters were emitting. They were fun to read, and they kept me so engaged that I read them faster than I would a normal novel. For that reason, I was so excited to go to this panel and hear all about new graphic novels. 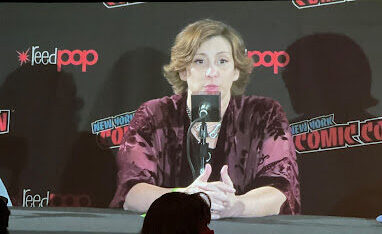 This is Kami Garcia speaking at NYCC 2021.

When asked why they wanted to write for young people, Kami said that she always thought kids were more fun and cool. She was a teacher for years before becoming an author. LeUyen Pham said that it gets you closer to your audience. It’s hard to write for younger people, but you feel a sense of reward when you’re writing for children, and you gain a greater connection to them. Shannon Hale said that books are more fun when you’re in middle school and then when you get to high school, books aren’t fun anymore. I agree with this completely. In high school, we were reading things like Macbeth and The Great Gatsby. While they are classics, they are boring. Sorry, Shakespeare.

This is Shannon Hale speaking at NYCC 2021.

The main idea that the authors and illustrators all spoke about was how great it was to include diverse characters in their novels to whom many groups of people could relate. E. Lockhart’s Whistle: A New Gotham City Hero contains a Jewish superheroine. Kami Garcia, author of Teen Titans, said that it’s so important for kids and teens to have people who look like them in these powerful roles. That is the power of graphic novels. You don’t have to imagine them in your head – you get to see the characters on the pages. Representation matters in so many ways. If you have brown characters, you need to have them be different shades of brown. It’s so important to have these different shades of skin tones because that’s how the real world is and that’s what kids and teens see in their schools in most places in the United States. 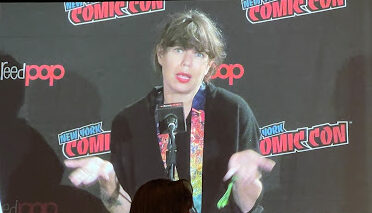 When it comes to the Harry Potter books and films, obviously, an overwhelming number of the characters are White. However, it takes place in the United Kingdom, which is diverse and multicultural. When you have such a diverse group and then make only a handful of them BIPOC, there is a problem.

Children who aren’t White want to see people who look like them. They want them to be witches and wizards and they want them to have speaking roles and personalities and not just be background characters. I think it’s so awesome that Harry Potter and the Cursed Child in London – and every production since – had a Black actor, Noma Dumezweni, portray Hermione. Having diverse characters makes you reach more people and more fans and gives people hope that they can achieve anything.