NYCC: “The Women Who Built Fandom”

My second day at New York Comic Con was on Sunday. The first thing I wanted to do after I arrived was look at all the art and collectibles before heading to my next panel. 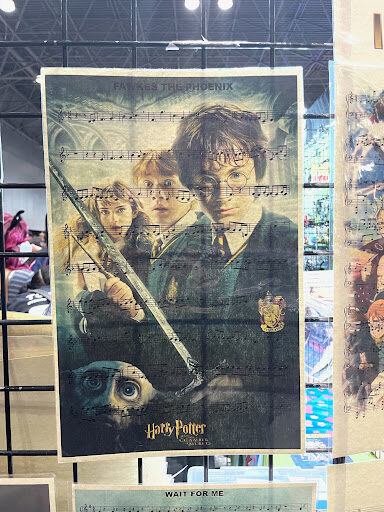 This sheet music was being sold at NYCC 2021. 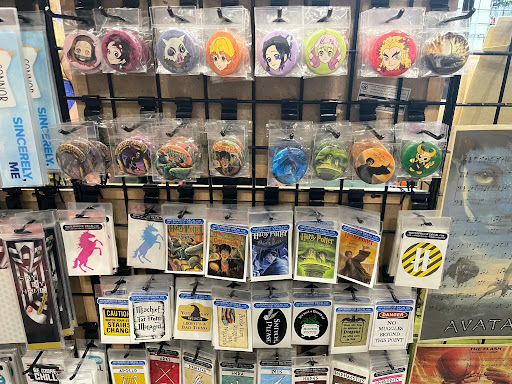 These Harry Potter magnets were sold at NYCC 2021. 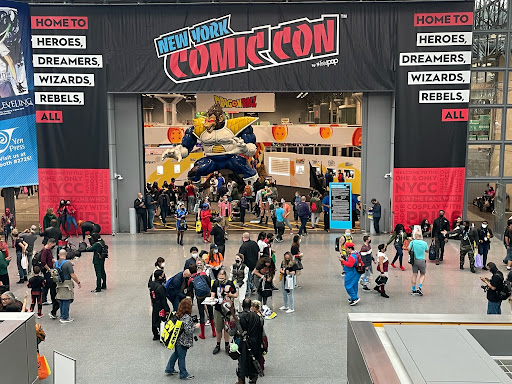 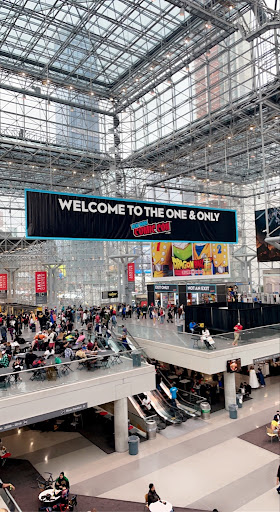 After looking at all the gadgets and gizmos, I headed to the panel titled “The Women Who Built Fandom.” The panel was about women over the past couple of centuries who were “stans” of science-fiction stories and shows. The panelists – writers/podcasters Anika Dane (Antimatter Pod, Women at WARP), Karen Walsh (GeekMom.com), and Sue Kisenwether (Women at WARP) – celebrated the history of the women who laid the groundwork for modern-day fandom. 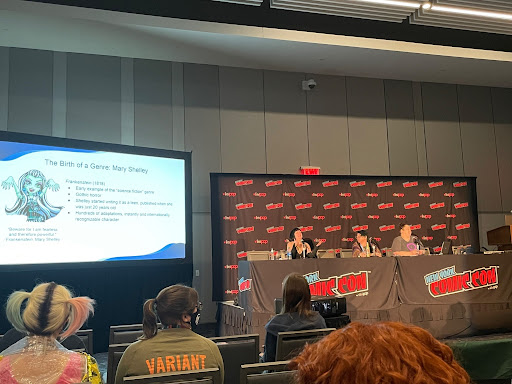 Women have been at the forefront of science-fiction fandom since Mary Shelley’s Frankenstein (1818), which she started writing when she was a teenager. The panel described Shelley as being the “original goth girl,” and her work is one of the most recognizable characters in literature and film.

Victorian serials set the tone for fans writing to the authors. In England, “Magazine Day” was when new installments were released. Fans of them were mostly women because the men were out working. These female fans wrote to the authors about their thoughts, and sometimes the authors responded to the criticisms by changing certain plot lines or killing off characters because that’s what the fans wanted.

“Film-struck girls” was a term given to young women who went to the movies at the turn of the 20th century. They analyzed films they saw and wrote to film publications and movie stars with their different analysis.

We saw another large female fanbase emerge once Star Trek premiered. It was about to be canceled until John and Betty Jo “Bjo” Trimble stepped in. They had mailed out a call-to-action, and it became known as a save Star Trek letter-writing campaign. NBC received thousands of letters from people begging them to renew Star Trek, and because of the overwhelming number of people writing in, it was renewed for another season. Lucille Ball also saved Star Trek three times and sold her studio to Paramount Pictures so that the show could continue. The first Star Trek convention was organized by a group of women spearheaded by Devra Langsam and Elyse Rosenstein and was held in New York City in 1972.

As we entered the 1990s, The X-Files made its way into the homes of millions when the Internet became more accessible. The X-Files had a huge online fandom with message boards and chat rooms. Thanks to The X-Files, the “Scully Effect” influenced the lives of female fans. Dana Scully was seen as a role model because she was a woman in STEM, and a lot of female fans wanted to embark on a similar career. Personality traits, jobs, and attitudes of characters can influence the people in fandoms immensely.

Queerness was normalized in sci-fi shows when Xena: Warrior Princess premiered. The main characters named Xena and Gabrielle brought queer representation onto the screen. Although they are not in a confirmed lesbian relationship, they are as close to one as possible without crossing the line. Female fans felt comfortable openly expressing their queerness within this fandom.

Female fans of Buffy the Vampire Slayer spearheaded changes both online and in person. They helped raise a few questions: Can character fandom move beyond problematic creators? Can we take back control of the narrative? Does controversy take away the power the characters give you?

I don’t think there is one type of fandom that is unproblematic whether it be the creator or some fans themselves. Nowadays, fandoms are able to take control of the narrative in some way by building their own world within a world or by completely ignoring what is canon. They make their own “ships” and draw the characters with different sexual orientations or different ethnic backgrounds or religions. We are able to create our own stories, and this change is all thanks to the incredible work and dedication of the women before us.