The Tales Untold: Of Paintings and Sisters

I’ve always been fascinated by the Black Sisters, particularly Bellatrix and Narcissa’s complex relationship, and it pains me to see how little content there is when it comes to the lives they led before they went down their separate, winding paths. This is why I set out to craft my own story – a fantasy of how, once upon a time, even they had a sisterly bond that none could break.

This is one of my many tales of the Black Sisters’ obscure childhood. 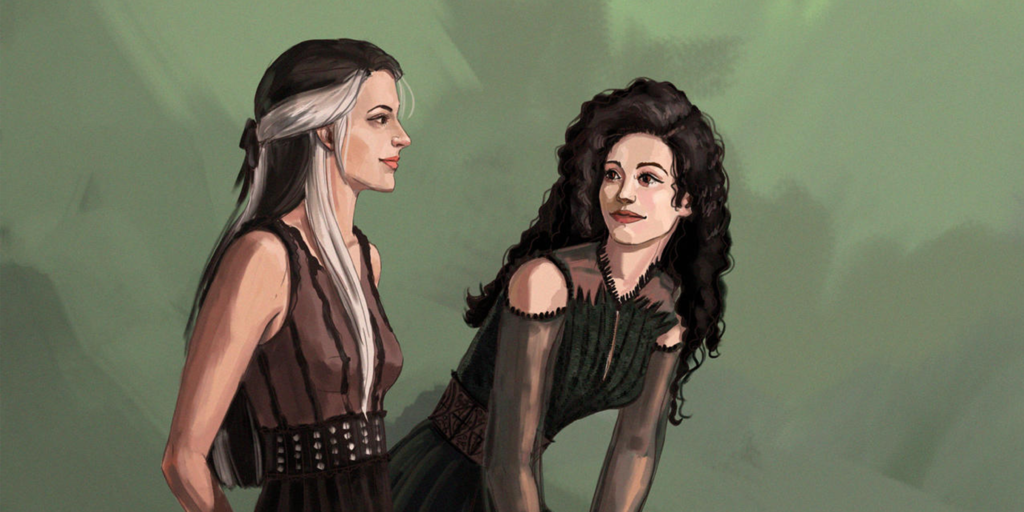 The room was pitch black, save for the few streams of moonlight that filtered through the half-shut curtains. An easel stood at the foot of a four-poster bed, a young girl facing it.

Her wand twirled idly in the air a few feet to her right, mimicking the paintbrush in her dainty fingers. The sixteen-year-old stared at the painting, pausing for a moment, and her lips curled into a disgusted sneer.

“Pathetic,” Bellatrix snarled, vehemently shoving her brush into its holder.

With a maddened glint in her eyes, she wordlessly summoned her wand, and using a Severing Charm, slashed it down against the canvas. The two halves were sent hurtling to the back of the room at the force of the spell, and they landed face-down onto the floorboards, staining the wood with thick and viscous periwinkle.

Breathing heavily, she stalked toward the high-backed armchair facing the fireplace and took a new canvas. As she straightened, viridescent eyes landed on the portrait of her parents, and she shrunk under Cygnus’ scrutinizing gaze.

She remembers the first – and last – time she had shown her father one of her paintings. Bellatrix had fidgeted excitedly that day, gazing hopefully at his blank expression as he surveyed her piece.

He’d only looked at it for a mere three minutes when he turned to face her.

Without warning, Cygnus wordlessly summoned a penknife from Bellatrix’s trunk of art supplies and started hacking away at the canvas in large, furious swipes – tearing the linen until it was unrecognizable.

As he turned towards his daughter, his gaze hardened. “Is there something wrong?”

Bellatrix’s lips curled and, for a split second, looked like she wanted to retort but instead snapped her mouth shut.

Her expression was murderous, and the air seemed to crackle around her, magic bubbling beneath the surface of her skin before the fireplace suddenly roared to life.

Disgruntled by her violent display of accidental magic, Bellatrix tore her gaze away from her parents’ portrait. Clenching her jaw, she quietly strode towards her dresser, a faraway look in her eyes as she rummaged through the top drawer.

When she found what she was looking for, Bellatrix felt her lips twitch into a relieved smile.

“There we are,” she murmured.

The portrait of herself and Narcissa was ink-speckled and quite worn, but it was relatively unharmed thanks to the numerous preservation charms Bellatrix placed.

She vividly remembers the day Narcissa had given it to her – the day she had boarded the Hogwarts Express for the first time.

The scarlet steam engine seemed to glimmer in the sunlight, and Bellatrix was far too distracted by her nerves to notice her mother and father’s disgruntled expressions as Andromeda continuously pestered them about Hogwarts.

She searched for her friends through the many carriages when a small body collided with her back, thin arms wrapping around her midsection.

Paying no mind to the arms wrapped around her, Bellatrix pushed through the crowd until she saw a friend of hers waving through one of the compartment windows.

As she stopped near the door, she felt Narcissa tug shyly on her hand. Bellatrix faced her and raised her brow, silently urging her sister to go on, and slowly, the younger girl reached into her pocket and handed Bellatrix a neatly folded piece of parchment.

Before she could ask what it was, Cygnus swooped in and placed her trunk in the carriage while Druella ushered her to get onto the train. Craning her neck to look at Narcissa one last time, she smiled and waved when she saw the young blonde grinning.

Laughing slightly, Bellatrix carefully returned the drawing to her dresser before she froze, eyes lighting up in excitement.

The new canvas in tow, she walked towards the easel, and she dipped her paintbrush into the palate, pausing for a moment before she started to work on a new painting.

Whisks of mauve and lilac blended across elegant silhouettes, alabaster, dijon, and old ivory melting into streams of moonlight against the aggressive strokes of Aegean teal and silvery slate that fly across the landscape.

Lavender, forest, and pine band across the canvas, narcissus blossom meeting juniper and chestnut, curving and blending. Indigo, rosewood, and cerulean dissolve into the skin while beige and jonquil liquefy into Narcissa’s distinct blonde.

Staring at the painting, she sighed with longing.