USQ Stands Against Another Anti-Transgender Law

In February, US Quidditch (USQ) spoke out against an anti-transgender law in Utah and against a similar law in June in Florida. Currently, there is another new law in Texas, and USQ is standing against it.

This new law, House Bill 25, forbids student athletes from playing on school teams under a different gender identity from their “biological sex.” The students are expected to play on sports teams that correspond with the sex that is written on their birth certificates.

(a) Except as provided by Subsection (b), an interscholastic athletic team sponsored or authorized by a school district or open-enrollment charter school may not allow a student to compete in an interscholastic athletic competition sponsored or authorized by the district or school that is designated for the biological sex opposite to the student’s biological sex as correctly stated on:

(1) the student’s official birth certificate, as
described by Subsection (c); or

(2) if the student’s official birth certificate described by Subdivision (1) is unobtainable, another government record.

The bill was introduced and read for the first time on September 27. Since then, during October, it passed through the legislative system until it was signed by Governor Greg Abbott on October 25. 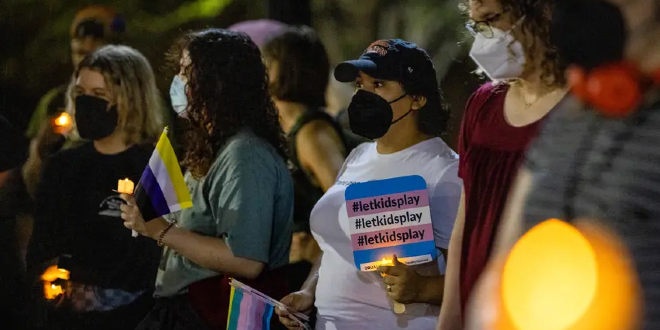 LGBTQ supporters and activists demonstrate outside of the Governor’s Mansion on October 12, 2021.

The author of the bill, Valoree Swanson, argues that the intention of the bill is to protect girls’ sports and make sure that the competition is fair. The problem is that the bill also discriminates against transgender people.

The view of USQ is a similar situation to its view toward Florida, especially for the regional championship. USQ has promised to protect the safety of LGBTQIA+ and BIPOC players because equality and diversity have been always important parts of Muggle quidditch. Part of USQ’s commitment has been to oppose discriminatory bills or policies that would disqualify a location from hosting a USQ event.

This is why the 2021 South Regional Championship was canceled. Now USQ is rethinking the 2022 Southwest Regional Championship that should be held in Lubbock, Texas, on February 19–20, 2022. It hasn’t been decided if the event will be canceled yet. USQ is working with teams and hopes to get enough feedback to find the best solution.