Castium Revelio: Getting Ready for a Charitable Christmas

Welcome to this week’s edition of MuggleNet’s Casting News! After last week’s bumper edition, this week we’ve got some good news for Jack Thorne, Golden Globe nominations across the Wizarding World, and teasers for some upcoming shows. Castium Revelio!

We're starting off this week with the nominations for the 2022 Film Independent Spirit Awards! Jason Isaacs (Lucius Malfoy) has already been presented with the Robert Altman award for his performance in Mass. The award is given to one film's director, casting director, and ensemble cast. A project featuring Stephen Fry (narrator of the Harry Potter audiobooks) has also been nominated. It's a Sin has been nominated for Best New Scripted Series, and the show's lead actor, Olly Alexander, has been nominated for Best Male Performance in a Scripted Series. Congratulations to Isaacs for the win, and good luck to Fry! You can see whether It's a Sin wins any awards on Sunday, March 6, 2022.

We've got charity projects from different Wizarding World alums next. First up, not only will Stephen Fry be included in the International Spirit Awards, but he's also joined a campaign with Redwings. Redwings is a charity that helps to support rescued horses, donkeys, and ponies. Every year, the charity releases an animation for Christmas, with this year's being narrated by Fry. He tells the stories of Samson, a Shetland pony who was rescued in 2004, and Wiggles, a donkey who was abandoned by his owner, as well as many others. All of the animals featured in the animation are available to sponsor. Have a look at the video below!

Stephen Fry will also be featured in a campaign alongside David Tennant, Dame Emma Thompson, and Noma Dumezweni (Barty Crouch Jr., Professor Trelawney, and Hermoine Granger in Cursed Child, respectively). The campaign is on behalf of EQlicious and aims to boost children's self-confidence and communication skills while also sharing stories of diversity and kindness and offering help to improve mental health. They'll all be narrating a collection of new stories for families with children aged six and under. Tennant's story will explore societal gender roles, Thompson's will discuss the body and the soul, and Fry's will introduce children to the idea of a First Nation community.

Tennant will also be busy next year. He'll reprise his role as the Doctor in upcoming episodes of a reboot of Big Finish's Doctor Who audio drama. We don't have any confirmed dates for his episodes yet, but we do know that they will be released at some point next year. Tennant played the Tenth Doctor between 2005 and 2010. Other Doctors returning for the audio drama include Christopher Eccleston and Tom Baker. Will you be tuning in to the drama?

Next up, we've got some exciting news on Anna Shaffer (Romilda Vane). She's reprising her role as Triss in Season 2 of The Witcher, and now we've got the first pictures of her in costume for this season! The show returned to our screens yesterday, but if you want to take a look at some stills, then see Shaffer below and explore the other 25 pictures that were released alongside it. 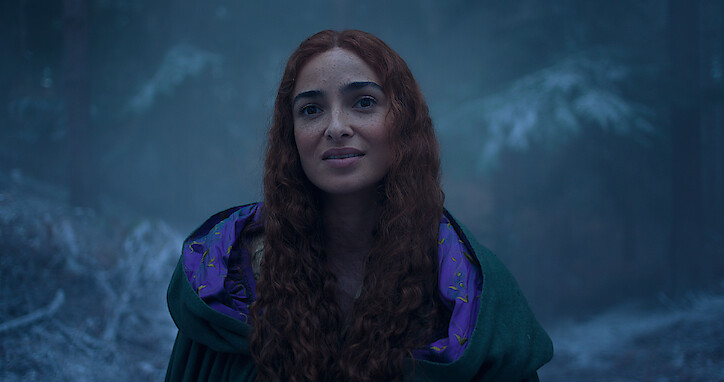 There's some Christmas magic set to appear on our screens this festive season. You'll be able to watch an all-new pantomime of Beauty and the Beast on BBC Two! Pam Ferris (Aunt Marge) will play Marie, while David Tennant is also adding this to his list of upcoming shows, although we're not sure what role he'll be playing in this production. The pantomime is set to raise money for Comic Relief, with last year's Cinderella production raising £900,000.

We're branching out into music next, with a collaboration between John Cleese (Nearly Headless Nick) and rock legend Bryan Adams. Adams's new single, which is called "Kick Ass," has been taken off of his upcoming album, So Happy It Hurts. Cleese opens the song with a spoken introduction, described as an "introductory sermon" by Adams. Listen to the song below, and let us know what you think about Cleese's introduction.

Sticking with the theme of music, Gary Oldman (Sirius Black) will be part of a group of stars celebrating the life of another rock legend: David Bowie. He'll join Def Leppard, Ricky Gervais, and many others for the special celebration, which will be streamed on what would have been Bowie's 75th birthday, January 8, 2022.

We've got a Netflix release date to tell you next. After We Fell, in which Hero Fiennes Tiffin (young Tom Riddle) stars as Hardin, will join its two prequels – After and After We Collided – on Netflix! You'll be able to rewatch it on January 17, or you can catch up with the After series so far, ready for the release of the next installment next year.

Speaking of upcoming installments, we're already looking forward to the third chapter of the Kingsman film series. The film series is produced by David Heyman (who also produced the Harry Potter films). The second chapter, The King's Man, will be released next week, with the as-yet-unnamed third part set to begin filming in September! We don't know much about the film, other than that it will wrap up Eggsy's story. Are you already anticipating the third film?

We've got a trailer for a new project featuring Helena Bonham Carter (Bellatrix Lestrange) to show you next. It's a dark comedy anthology series called The House. It will tell the stories of three different generations as they each make one house their home. The series is a stop-motion animation, with the first story set in the 1800s, the second set in the present day, and the third taking place in the near future. The series will debut on Netflix on January 14, but until then, have a look at the trailer below!

Up next is a new project that will star Dame Maggie Smith (Professor McGonagall). The Miracle Club is a comedy and is currently in post-production. The project recently received €1.5 million from the UK Global Screen Fund, which is a one-year pilot scheme aiming to help support international distribution and development for the British independent film sector. The Miracle Club is one of nine films that will receive funding from the scheme.

From happy news for one project to sad news for another. We told you about Jason Isaacs's Film Independent Spirit Awards win earlier, but he is also featured in an upcoming World War II drama, Operation Mincemeat. Unfortunately, the film's release has had to be pushed back from January 14 to April 22. The delay comes as a result of the rapidly rising cases of the omicron variant in the UK and speculations of further restrictions. Were you hoping to see the film this January?

We've got an anniversary to celebrate next. Hook was released 30 years ago this April, and to commemorate the occasion, composer John Williams's soundtrack will be reissued as a special vinyl. The vinyl was released last Wednesday via Mondo and has already sold out. Did you manage to get yourself a copy?

We've got even more sad news next. Again due to the rising cases of the Omicron variant in the UK, we'll have to wait in the wings a little longer before we get to see Eddie Redmayne (Newt Scamander) as the Emcee in Cabaret. Members of the cast and crew have tested positive for the virus, meaning that the show has had to close until at least December 20, and any performances during this period have been postponed until late January. We hope those who have tested positive have a quick recovery!

Back to the happier news, Colin Farrell (Percival Graves) is set to star in an upcoming private detective series for Apple TV+. There are also reports that he will act as an executive producer for the show, although there is currently little information on the series. The show's working title is Sugar, and it's set to be a more contemporary take on the life of a private detective.

Sticking with new projects, lighting designer Christine Jones is involved in a new production of The Search for Signs of Intelligent Life in the Universe. The show opens on January 11 at the Shed in New York City, with performances running for a limited time until February 6. The show's plot explores American society and the feminist movement. Are you hoping to get tickets to the show?

Last but certainly not least this week, Jack Thorne's (cowriter of Cursed Child) campaign to raise awareness about the lack of disability representation both on screen and behind the camera has seen success! He launched a pressure group called the Underlying Health Conditions group at the beginning of this month and released a report at around the same time that exposed how unprepared most film studios are for disabled people to work there. The report also calls for four measures to be put into place in order to make the film industry more accessible: require an accessibility co-ordinator role for all high-end productions, include an extra sum for accessibility adjustments in all production budgets, establish a one-off fund to give studios the budget to add accessible facilities, and introduce a levy to create a fund specifically for disabled freelancers. Now, Channel Four has agreed to take on some of these suggestions, releasing three templates on how they will work with disabled talents in the future. Congratulations for the campaign's victory, and thanks to Channel Four for putting these ideas into practice!

That’s a wrap on this week’s Casting update! We wish all those up for awards good luck, hope that the stage productions we’ve mentioned don’t have to close down further, and congratulate those who have seen victory in the past week! Are you excited about any of the upcoming projects we’ve mentioned?

Want more posts like this one? MuggleNet is 99% volunteer-run, and we need your help. With your monthly pledge of $1, you can interact with creators, suggest ideas for future posts, and enter exclusive swag giveaways!
Support us on Patreon
,