Welcome to a magical and festive Events Roundup, where we’ll be taking a look at some Christmas-themed Harry Potter events that are taking place this December.

To celebrate that Harry Potter and the Cursed Child is coming to San Francisco, California, in 2022, starting December 8, Wizarding World Wednesdays will begin at the Safeway Holiday Ice Rink in Union Square, San Francisco.

Take a spin around the rink with your Hogwart Housemates! Harry Potter and the Cursed Child presents WIZARDING WORLD WEDNESDAYS at the Safeway Holiday Ice Rink in Union Square. Celebrate your house pride every Wednesday during the 5:30 and 7 sessions. More info on Instagram pic.twitter.com/yeGZ7WZrgX

Each week, the event will be themed on one of the four Hogwarts Houses, starting with Hufflepuff on December 8. December 15 will be for the Ravenclaws, followed by Slytherin on December 22 and Gryffindor on December 29. These will take place between 5:30 p.m. and 7:00 p.m each Wednesday.

Fans can show up in their Hogwarts colors, ready to take a spin around the ice, for the chance to win special Harry Potter and the Cursed Child prizes, including opening night tickets for the official premiere of the show at the Curran theater on February 9.

Tickets, which include skate rental, cost $19, and these must be purchased in advance and online. 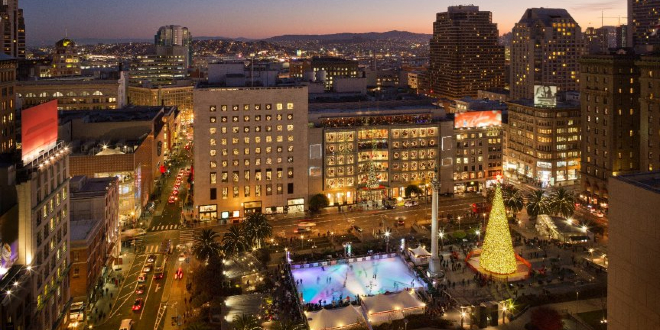 Head to Replay Lincoln Park in Chicago, Illinois, for its latest pop-up installment of A Very Harry Christmas, running from December 10 to December 31.

For the whole festive month, the bar will be transformed into a magical venue, with its main room replicating Hogwarts during the Christmas season and opportunities for photos with iconic characters and scenes from the films, including the Christmas-themed Great Hall. Additionally, there will be cosplay costume pageants, weekly trivia, a House Cup challenge, themed menus (including cocktails such as the Dementor’s Kiss and Polyjuice Potion), and two Yule Ball–themed events for New Year’s Eve.

There will also be spectacular nods to some of the fans’ favorite moments in the Harry Potter series, from the Whomping Willow in Harry Potter and the Chamber of Secrets and Professor Umbridge’s office to Hagrid’s hut and the Weasley clock.

The New Year’s Eve Yule Ball events will host special live performances by the Weird Sisters. The first event will take place on December 21 at 8:00 p.m., and entry will cost $25, which includes a $20 drink credit. The second event will be on New Year’s Eve at 7:00 p.m., ending at 2:00 a.m. These tickets will cost $50, and guests will receive a $40 drink credit, plus a midnight champagne toast and party favors.

A Very Harry Christmas is reservation-free, but tickets can be bought online. Those attending must be over 21, and COVID-19 restrictions will be in place, with protocols being strictly observed to ensure the safety of both staff and customers.

Join the congregation at Gastrochurch in Houston, Texas, which gathers around the dinner table rather than pews to engage in spiritual conversations. The congregation is hosting a Harry Potter–themed Hogwarts event, which will be “even more magical” than ever, with the theme taken from Harry Potter and the Sorcerer’s Stone.

This will be its fifth annual event, and it is fundraising for Gastrochurch. Instead of the usual Yuletide dinner, an outdoor market will take place on December 18 between 10:00 a.m. and 4:00 p.m. at Kempner Park in Galveston. There, you will find more than 40 pop-up tents that will all be decorated in either a Christmas or a Harry Potter theme, hosting local businesses that will be selling gifts and snacks.

You can drink butterbeer, play Quidditch, head to Diagon Alley to purchase a wand at Ollivanders, or go to the Sorting Hat station, where you can be Sorted into your Hogwarts House and represent it in some trivia games.

Once the Christmas village has closed, you’ll be able to pop on your favorite Christmas outfit or Harry Potter costume and attend the Yule Ball, which begins at 7:00 p.m. in Kempner Park’s social hall, Garten Verein, which will be complete with live music, dancing, food, and drinks.

Tickets are limited, costing between $78 and $1,080, and can be purchased online. 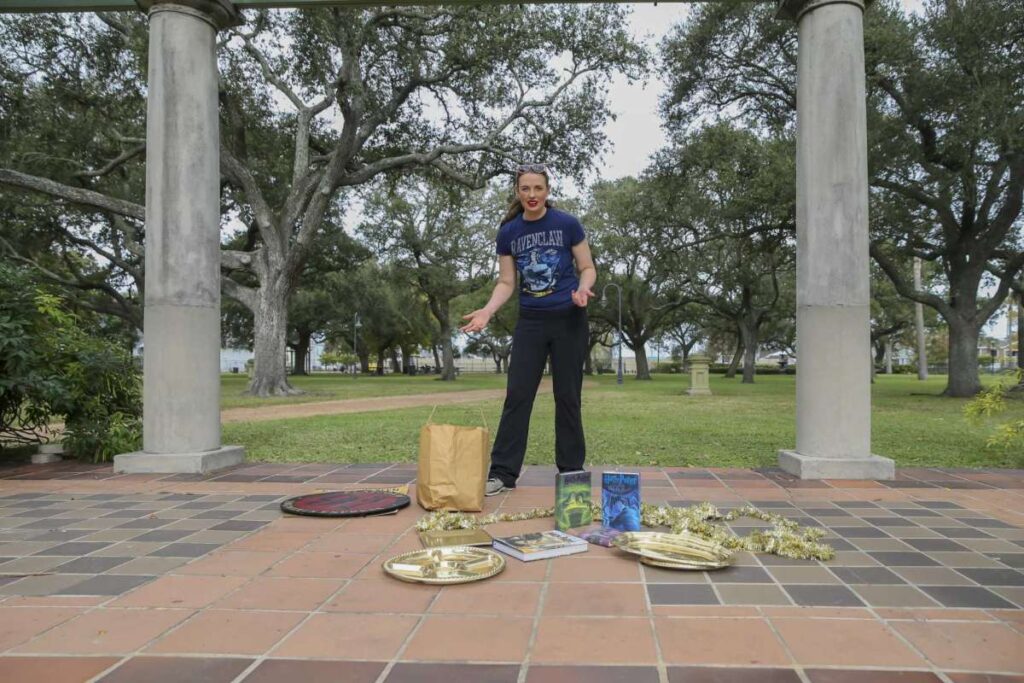 Gastrochurch reverend Meredith Mills shows off some of the party event items inside the pergola in Kempner Park.