I Went to Wizard School and Had a Blast

Earlier this month, MuggleNet attended Albion School of Sorcery, a live-action role-playing game (or LARP) orchestrated by Moonrise Games. The four-day event, which took place in Racine, WI, hosted an intimate number of attendees who appeared in character as fictional personas of their making. The attendees could also uncover mysteries relating to their characters or the world at large and ultimately make decisions that changed the future of the world itself. I attended Albion this year for the first time on behalf of MuggleNet, and I am pleased to say that the experience positively blew my socks off. I truly feel events just like Albion are the next generation of fan experience for lovers of any number of fantasy and adventure series, Harry Potter included. 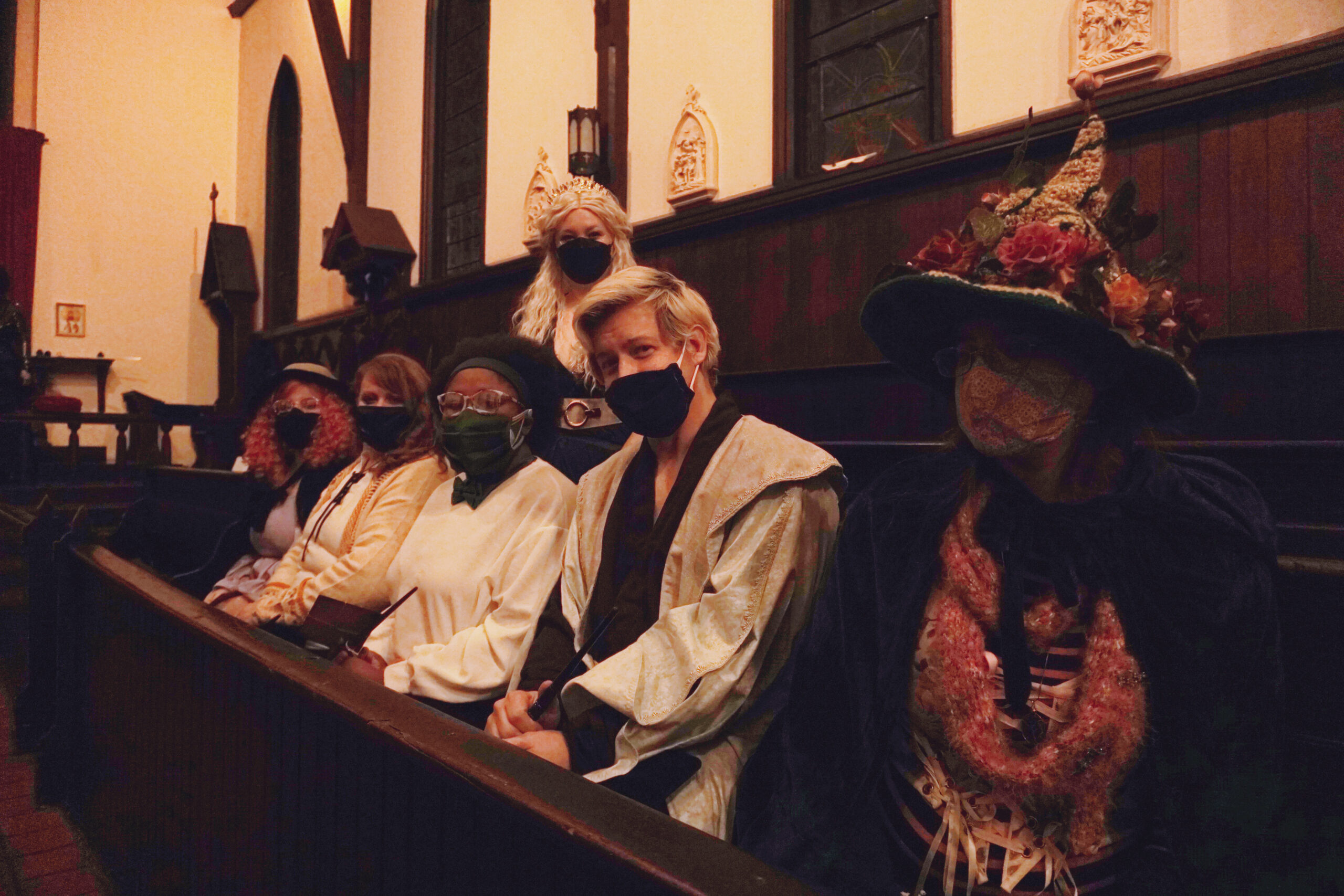 The just-formed members of Albion’s House Solum, along with their house head Cloelia Montclare, pose for a photo with wands raised. (Photo credit: Tiffany Keane Schaefer)

The central conceit underpinning the Albion experience is that it is a school of sorcery where beings who practice magic can go to hone their talents. As such, attendees arrive, are sorted into one of four houses, get a wand and a cloak that’s specific to their house, and spend some of the experience sitting classes in lessons such as potions, herbology, and history of magic. We did all of that, for sure, but talking only about those things would just not cover the full experience of Albion. The people I met and interacted with, and the world we built together, are the things that will stick with me for years to come.

Since 2006, I have attended many fan conventions. Listening to and participating in panel discussions on Severus Snape’s loyalty, what we know about Hermione Granger’s parents, or the rules surrounding how Metamorphmagi like Nymphadora Tonks work in canon, were the highlights of those conventions because it was another way to engage with the source material we as fans were passionate about. The evolution I experienced at Albion from merely discussing the stories which we all share to actively creating a shared story through live-action role-play is one that took me completely by surprise. My convention experience could not have prepared my mind (or my heart) for how thrilling and engaging my time at the LARP would be. 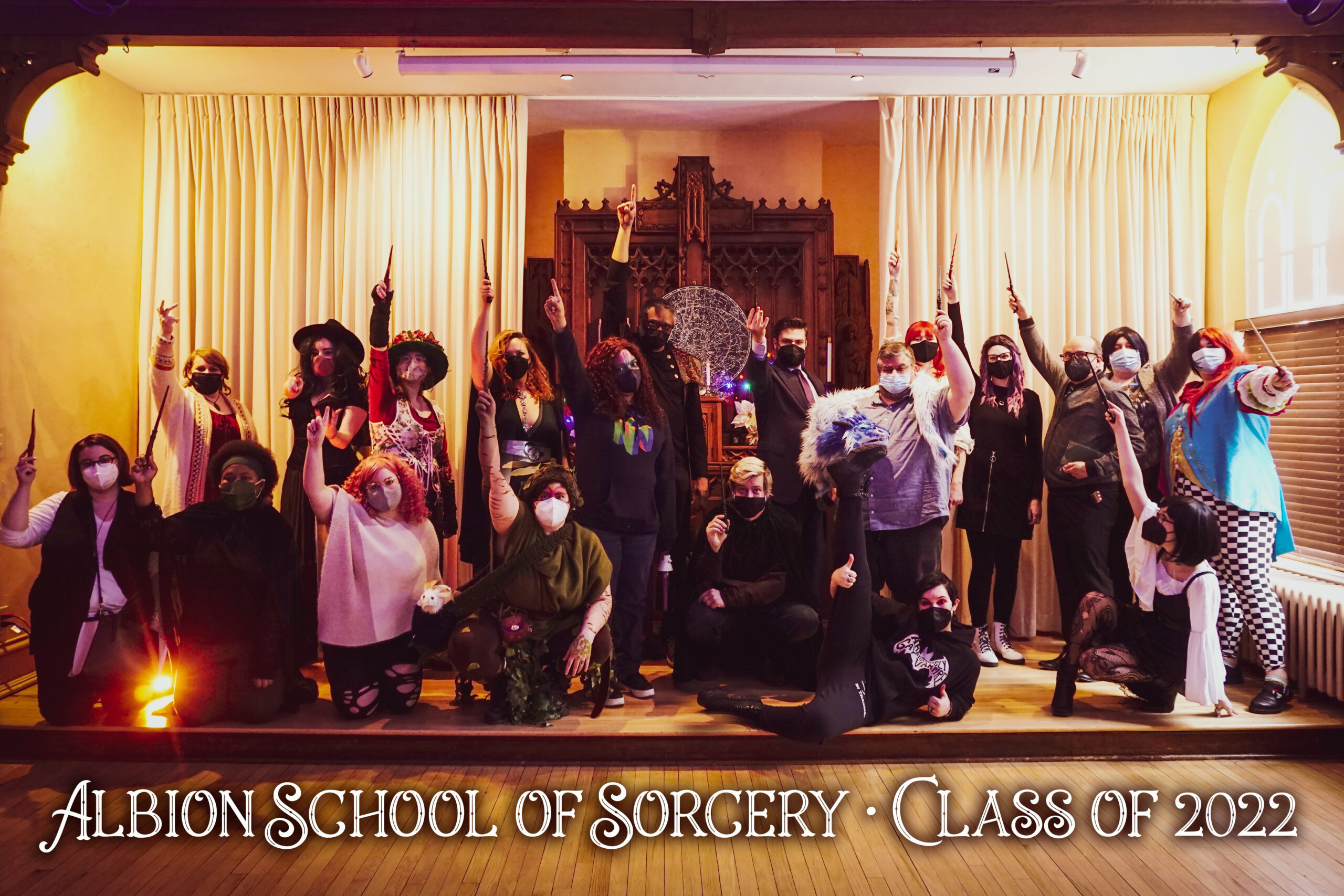 The 2022 students and staff of Albion School of Sorcery raise their wands for a class photo at the conclusion of the event.

The location where the event was held, The DeKoven Center, was the perfect venue to be transformed by Moonrise Games into Albion School of Sorcery. Taylor Hall specifically, where most of the LARPing occurred, is as old as Albus Dumbledore and is as charismatic, too. We received three meals a day catered by the center (with special accommodations for gluten-free, non-dairy, and other dietary restrictions) and genuinely enjoyed exploring the building, which was ours to roam freely at all hours. Due to COVID-19 precautions, the event (which was initially delayed from 2020) was fully masked. Only at night, once we retired to our single occupancy private rooms, were we not talking through a barrier at one another. And yet, this did not diminish the experience. If anything, it may have made me a better listener!

Tiffany Keane Schaefer, lead facilitator and “LARPwright” of Albion, also made sure to imbue the game with clever consent mechanics that allowed players at all times to feel comfortable within every moment. This was done by giving us a non-verbal hand gesture for checking in with our fellow players, with whom our characters may even be arguing, and making sure that the realistic experience of the argument was not hurting that person emotionally. If a particular conversation should happen to reach a topic that made a player uncomfortable, they could verbally declare, “Ouch!” To this, the player opposite them would simply reply “Oops!” and whatever topic was being discussed would be dropped, with no follow-up questions asked of the player who raised the objection. When proper care like this is taken in a live-action role-playing game, the directions that the role-play can go in are truly limitless.

For more details about my time at Albion, please continue to check this site for further articles. If nothing else, take this message away from the piece: LARP experiences, once eschewed by me (a 20-year contributor to MuggleNet this year) for being “too nerdy” or inaccessible, may very well be the future direction we all find ourselves going in to keep the flame within us alive in trying times.

Editor’s Note: Admission to attend Albion School of Sorcery was provided to MuggleNet by Moonrise Games. All opinions belong to the reviewer.