My Time at Wizard School – Part 1: Preparing to LARP

When the invitation came for me to attend Albion School of Sorcery, a character-centric live-action role-playing event held by Moonrise Games earlier this month, I was excited and also a bit nervous. Four days spent in character seemed like quite an awful lot of time. When I did theater in high school, we only ever put on four or five performances, totaling maybe 12 hours. And in 2017, when I graduated improvisation training at iO Theater, our class did 30-minute shows each Sunday for eight weeks. How would I find the energy and confidence to perform for more than 30 hours, unscripted, in a role that was being invented as I went along? And would I be any good at it? 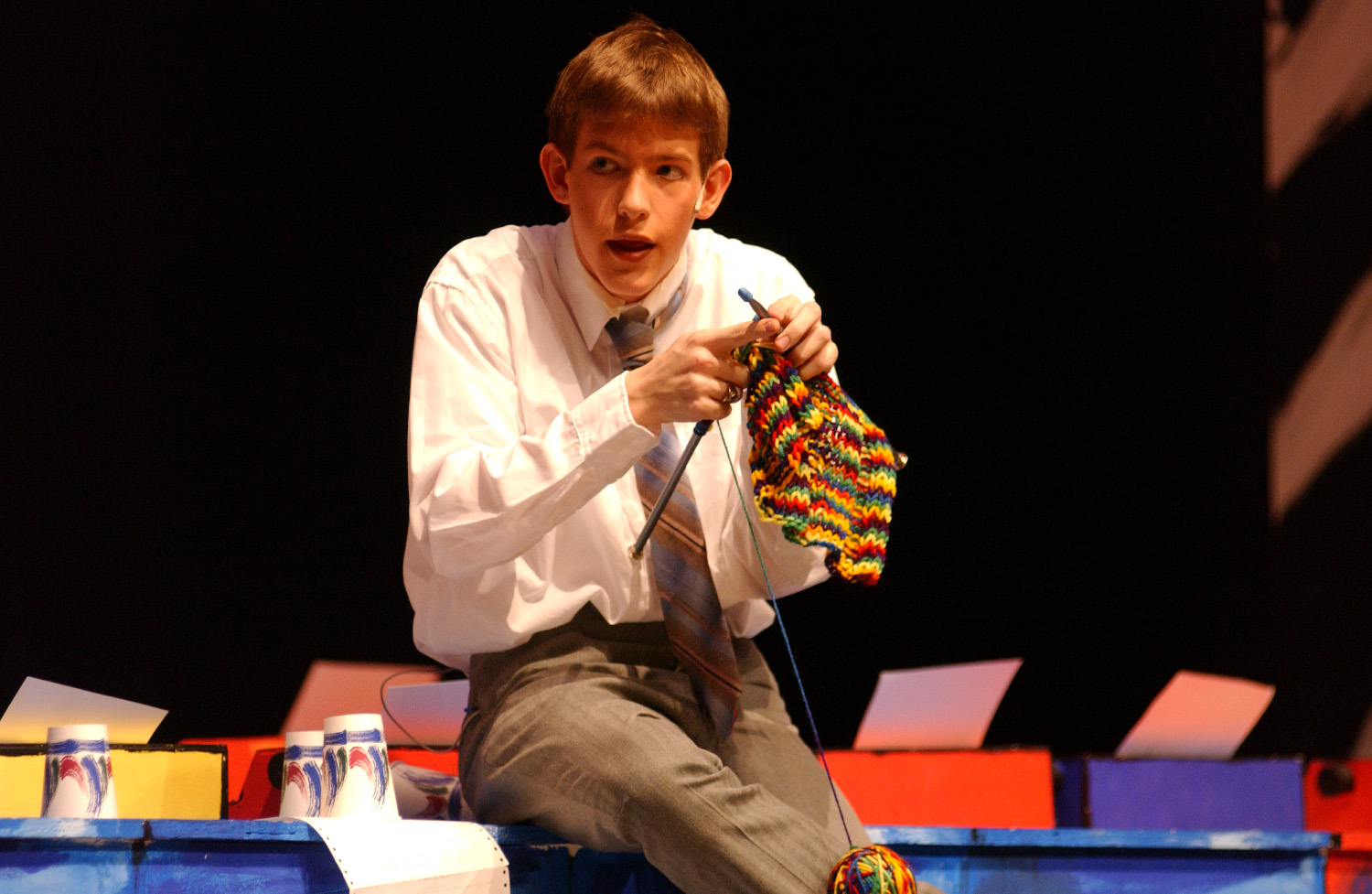 My high school theater experience was a nice starting point for me to consider what I would want my character to be like at the Albion LARP. (Photo credit: Purdon Photography, 2005)

As Tiffany Keane Schaefer (founder of Moonrise Games) has said to me, the story that gets created during any of her Live-Action Role-Playing games (LARP) is a representation of the players who are a part of it, as well as what they want their journey to be. For LARPs that are as focused on character development and player choice as Albion, players’ words and actions relating to one another literally change the game and can sometimes (if not carefully planned for by the game master) break the game. The wholly dynamic, anything-can-happen feeling I felt while experiencing Albion this month was one of the most fascinating aspects of the entire experience.

Joining Albion and developing my character meant, first and foremost, a meeting with Tiffany over Zoom. The session lasted more than an hour, during which she asked what characters from popular media I felt connected to and what aspects or attributes I saw in my character. As with certain cosplay I’ve done at conventions, I am used to picking characters that allow me to explore some lesser-seen or underutilized trait within myself. For example, when I’m embodying a character such as Gilderoy Lockhart, I turn the apparent self-awareness to zero and the mediocrity and use of irony up to 11. In looking for attributes that I hadn’t previously explored in a character, the two I settled on for my Albion character “Dysmas Zephyrus” were being a big brother and having memory loss.

Two of the players that had signed up for Albion before me, Harley Dublow and Hayli Hart (both of Lexington, KY), are real-life roommates who decided they’d like to play twin siblings in the game. They had been paired with another person, Mar Warner, the LARP’s only student NPC (non-player character or, for the sake of clarity, a staff member of the LARP). Because I said that I was interested in showcasing my brotherly love during Albion, it was suggested that I would join the LARP as the fourth (and final) oldest member of the Zephyrus family. This immediately gave my character some natural ties to other characters in the game and to other players that I could readily explore once the LARP began.

The idea to play a character with partial memory loss came about mostly for functional reasons. As I explained to Tiffany in our first Zoom meeting, I was nervous about remembering details for a world that would be brand new to me. And in real life, my ADHD affects which events pass through my brain into active memory and are able to be recalled short-term. “Normally, I can’t stand when memory loss such as amnesia is used in storytelling!” I declared to her, exasperated. But I needed to build an “out” for myself in case my character didn’t know something that he was told or should know, based on established events.

The memory loss angle also allowed Tiffany, as the game designer, to plan for how my character’s backstory would fit in with the backstory of the other characters and not just that of my siblings. This year, each of the dozen other players at Albion had to choose specific attributes and find “character wants” that would motivate them throughout the game. Thinking self-reflectively and doing this work upfront allowed both Moonrise and myself to craft the best possible starting point and character arc for me in the LARP, meaning the only remaining puzzle piece before I showed up in Wisconsin was my costume.

I am fortunate in this area because I have a number of fantasy costumes from my years of cosplaying at conventions and needed only to consult my existing wardrobe of cloaks, robes, belts, and boots to develop Dysmas Zephyrus. Because Moonrise had advised us to bring “clothes that we could move around in” (more on that in a future editorial), I settled for the subtle combination of Jedi tunic and Dumbledore-Esque wizard robes, both expertly crafted by my good friend Andrea Wakely of Twin Roses Designs. For a generalized fantasy LARP such as Albion, my mishmash of wardrobe ended up working quite well, considering it was my first time. Though in the areas of props, hair, and make-up, I was definitely not as creative as my fellow players. 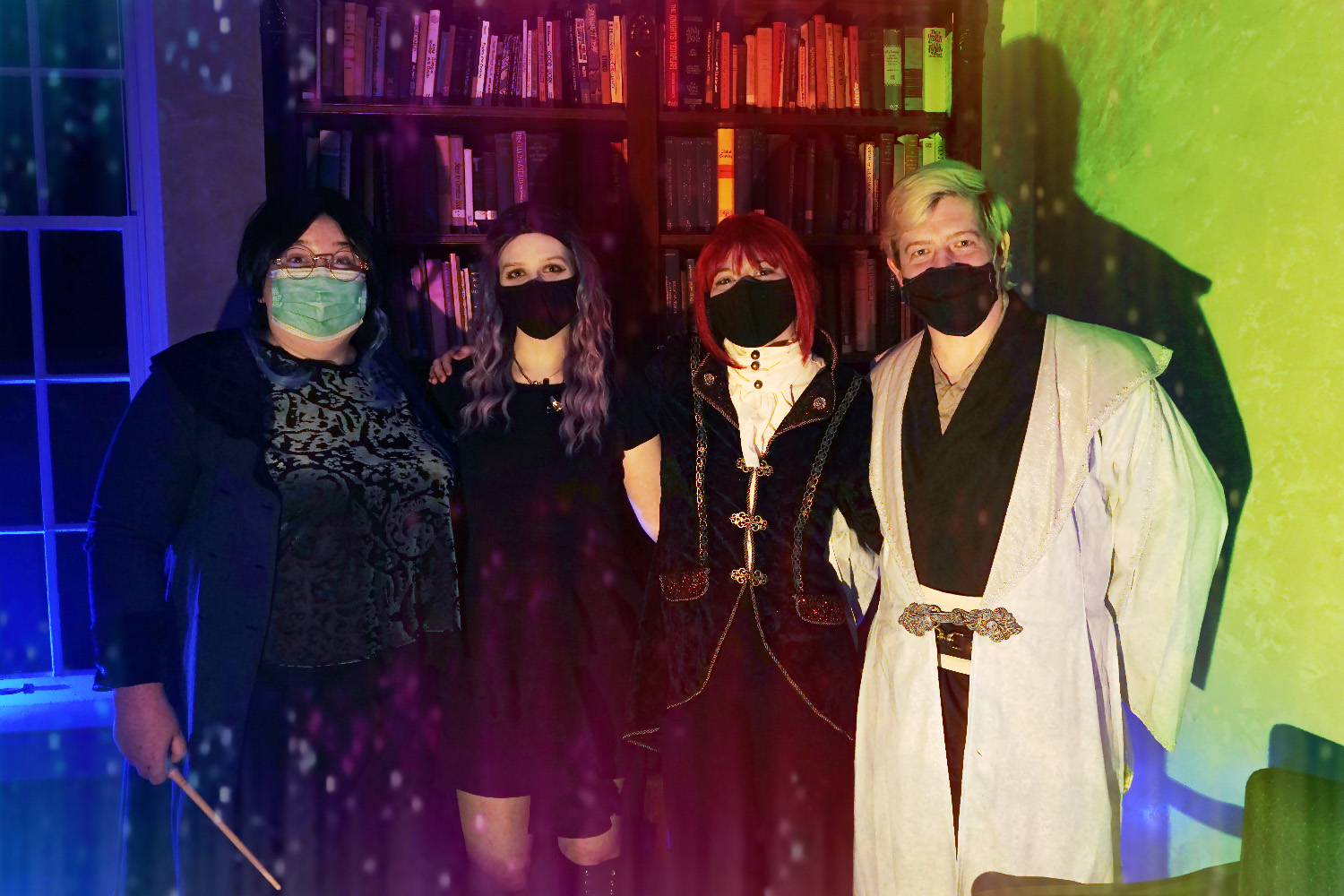 The four members of the Zephyrus Family (in character) pose for the camera at Albion School of Sorcery. (Photo credit: Tiffany Keane Schaefer)

Preparing some basic attributes about my character and connecting him to the other characters of the game really allowed me to hit the ground running, and I am grateful to Moonrise for the well-thought-out process. Because I had a built-in support system in the other players and all of them were experiencing the same situation simultaneously with me, we bonded to one another and did not experience as much stress or anxiety as I had expected. In fact, the four days of LARP went by very fast, in a constant rush of excitement and dopamine. If I felt tired at all during Albion, it was from staying up until midnight breaking into the headmaster’s office.

For more information on the people behind Albion, the other players I met, and the amazing plot that we watched unfold, stay posted on forthcoming editorials in this series.