Early Screening Event Adds to Excitement of “Secrets of Dumbledore”

The Wizarding World returned to theaters across North America on Wednesday night via an exclusive IMAX early screening event for Fantastic Beasts: The Secrets of Dumbledore. It has been four years since Fantastic Beasts: The Crimes of Grindelwald was released, and time has not diminished the enthusiasm of the fans who flocked to the ten select IMAX theaters to see the film a week before its North American release date of April 15. Although, unfortunately, having only ten theaters limited the number of fans who would have access to the event, it certainly made it more exclusive than the previous early access event held for Crimes of Grindelwald in 2018.

Having had the pleasure of attending both events, I can honestly say that the event for The Secrets of Dumbledore well exceeded my expectations before I even took my seat. I was lucky enough to get tickets for the AMC Lincoln Square 13 theater in New York, and I say lucky because tickets there sold out faster than a Niffler chasing after something shiny! Clearly, fans were eager for a little more magic in their lives.

Fans of all ages lined up outside the theater hours before the movie started. Cosplays, Hogwarts robes, and House scarves were all worn with pride. A red carpet complete with a backdrop was set up inside the lobby, and fans were invited to take pictures there before and after the movie. You could feel the enthusiasm and anticipation in the air as moviegoers who weren’t around the red carpet crowded near windows, all hoping for a glimpse of whoever would appear. Fans erupted into cheers as Eddie Redmayne (Newt Scamander), Dan Fogler (Jacob Kowalski), Jessica Williams (Eulalie Hicks), Victoria Yeates (Bunty), William Nadylam (Yusuf Kama), and director David Yates arrived. They made their way down the red carpet, kindly signing autographs and stopping for photographs. 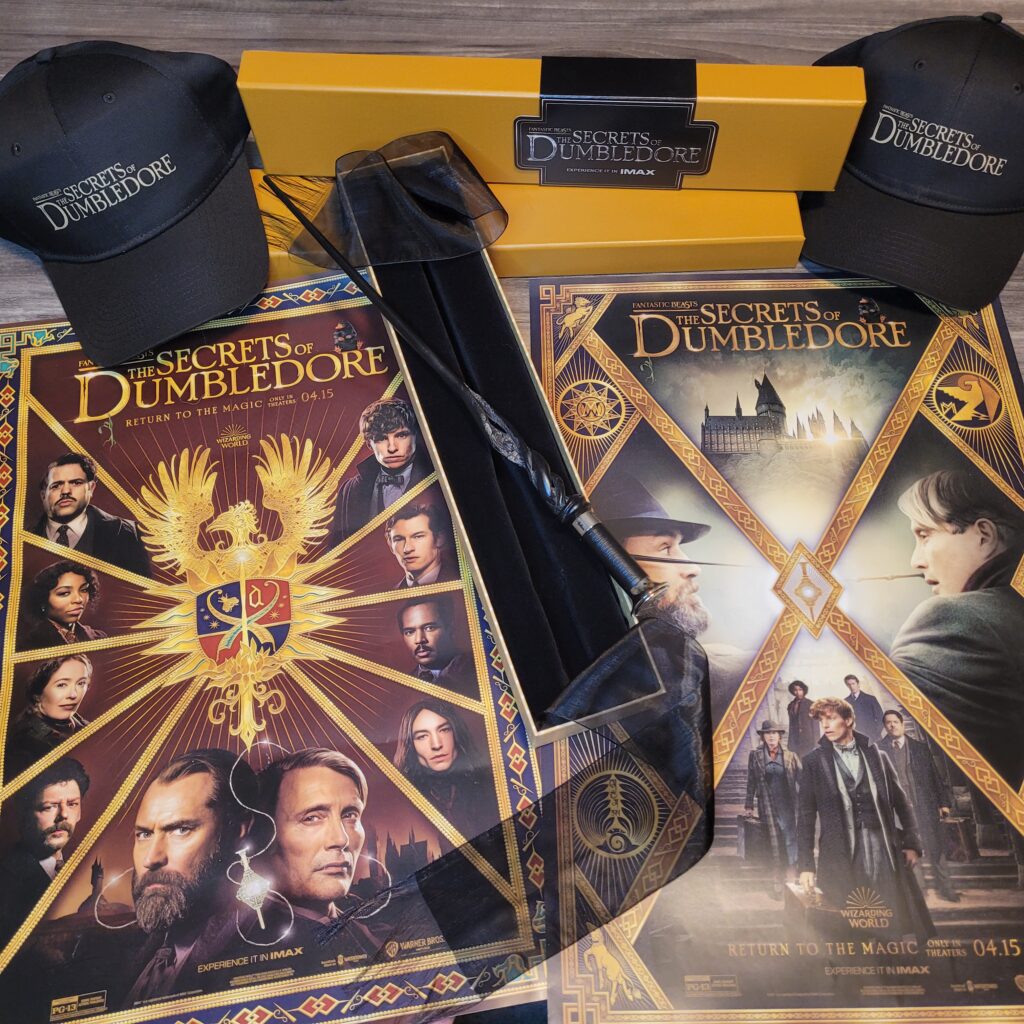 The IMAX website said the event would include a Q&A with members of the cast through connected theater technology, fantastic swag, giveaways, photo ops, and more. At the Crimes of Grindelwald event, you received a poster and a pin, so that is what I was expecting. But like Albus Dumbledore himself, the Secrets of Dumbledore event was not to be outdone. Once your ticket was scanned, you were able to collect your fantastic swag. This included a Secrets of Dumbledore hat, Albus Dumbledore’s wand, and your choice of one of three posters. After collecting your goodies, you could move on to the photo op. Your picture came to life using a little Muggle magic, with Hogwarts in the background and an animated flying phoenix swirling around the frame. 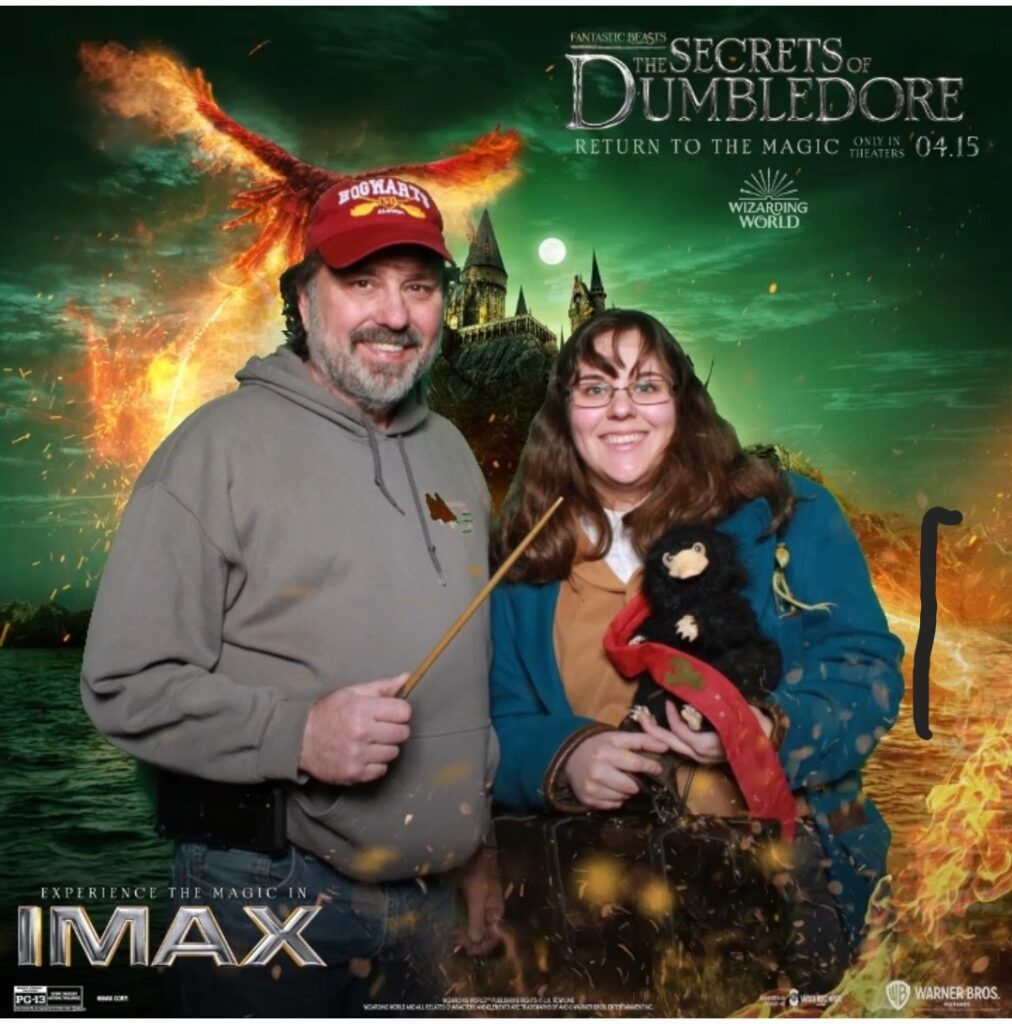 When it came time to take our seats, we were treated to a complimentary bag of popcorn and a drink. All this was done with such precision it would make the Hogwarts house-elves proud because, despite the crowd, there was no line, allowing you to grab and go. Once laden down with swag and food, everyone took their seats, and the trivia game began. Those who knew their Fantastic Beasts facts were awarded prizes. Then it was time for the Q&A session. The room exploded into cheers and chants as each cast member was introduced. The anticipation for the film only continued to grow throughout the session as the cast answered questions while carefully maneuvering around, giving any potential spoilers. Finally, it was time for the movie! Fans joined the cast in using their new wands to cast Lumos Maxima before they exited the theater to thunderous applause. Nox was then cast to dim the lights and start the film. 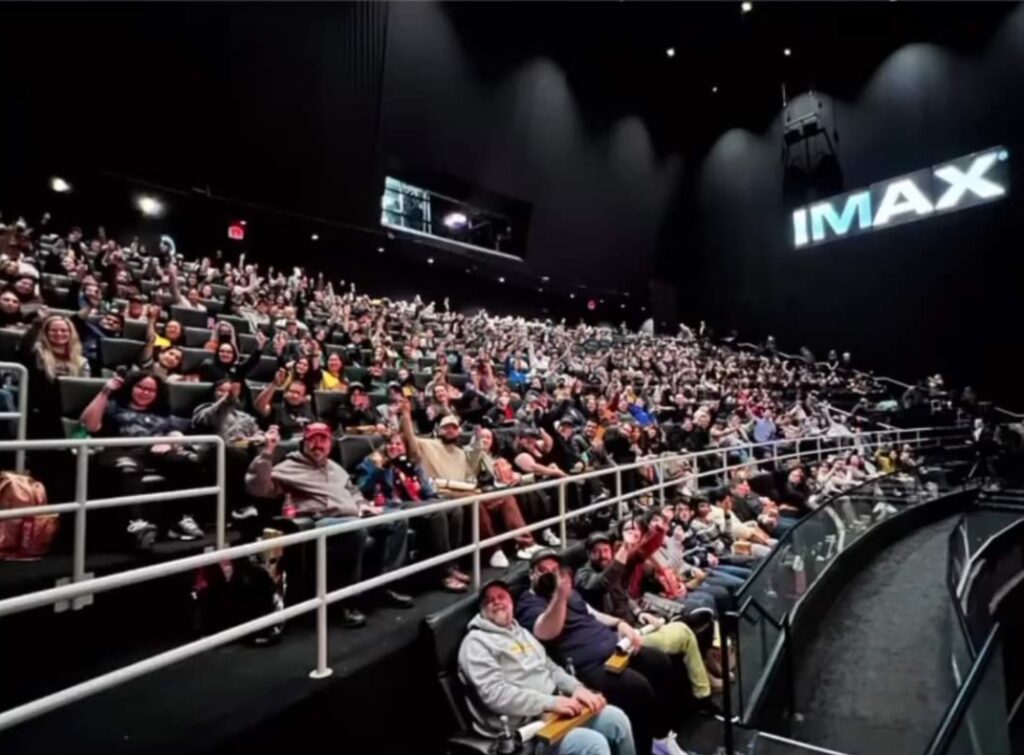 The movie, like the whole event, did not disappoint. During the Q&A, David Yates said, “The great thing about seeing these stories collectively is you share the experience… And I think that is the beauty of cinema, and I think that’s why it will never go away. Because those moments are amplified when we experience them together.” And that held true. Whether it was the magic of the cinema combined with the collective enthusiasm of those gathered in that theater or just the spellbinding movie itself, the Secrets of Dumbledore film and early screening event truly enchanted the audience and left us with an evening we would always remember.