21 Times Voldemort Proved He Had a Crush on Harry

Have you ever heard people say that if someone is mean to you, then that means they might like you? By that logic, Voldemort must have been crushing hard on Harry with all the times he tried to “kill” him. After a close examination of Voldemort’s actions and his quotes from the books, we’ve compiled a list of 21 times Voldemort proved he was smitten with Harry. 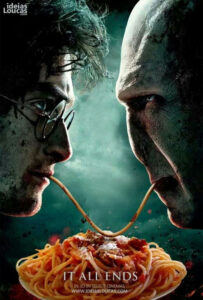 1. Voldemort barely had enough strength to grow anything more than a face on the back of a head, and yet he demanded a face-to-face meeting with Harry.

2. His most compelling argument to try and win Harry over to his side was that “there have always been those willing to let me into their hearts…” (SS 293)

3. He was kind and patient to Ginny inside the diary because she was feeding him details of what Harry was up to.

4. He was giving Ginny bad dating advice so Harry wouldn’t fancy her.

6. He made sure Ginny was unconscious before Harry came down into the Chamber of Secrets. He didn’t want her to be the annoying third wheel.

8. He showed off his great accomplishment of capturing Hagrid to gain Harry’s trust and admiration.

9. The memory of Tom Riddle flinched when Harry said he was ugly and foul. He then proceeds to set the Basilisk on Harry because his feelings were hurt.

10. The very first thing Voldemort did when he was reborn was stare at Harry. Examining his own body came second to looking at Harry with his own eyes.

11. Voldemort couldn’t introduce Harry to his parents, so he introduced him to his friends instead. “‘Listen to me, reliving family history…’ he said quietly, ‘why, I am growing quite sentimental.… But look, Harry! My true family returns…’” (GoF 646)

12. “Harry Potter has kindly joined us for my rebirthing party. One might go so far as to call him my guest of honor” (GoF 652)

13. Voldemort openly flirted with Harry when he said: “… but no matter. I can touch him now.” Voldemort then “laughed softly in his ear” (GoF 653).

14. We’ve all drooled over Cedric at some point or another. Was Voldemort killing the “spare,” or was he really killing the competition?

15. Killing Cedric doubled as disrupting Harry’s love life. Cho was too devastated to last through one date with Harry.

17. He always made sure Harry got a full year’s worth of education before trying to “kill” him. We all know he was just checking in on him.

18. Part of Voldemort’s soul camped with Harry, Ron, and Hermione for months. Its jealousy shone through Ron when it sensed Harry and Hermione bonding.

19. Voldemort always took forever to try to kill Harry whenever they had a face-to-face. Was he just monologuing, or was he peacocking?

20. Voldemort was disappointed when he thought Harry wasn’t coming to meet him in the forest.

21. Voldemort had all his Death Eater minions to do his dirty work, and yet no one but him was allowed contact with Harry.