Bonnie Wright can now add published author to her list of achievements. On April 19, just three days before Earth Day, her first book, Go Gently: Actionable Steps to Nurture Yourself and the Planet, was released. Go Gently promotes obtainable, eco-friendly steps inspired by her journey into sustainable living that each person can take in their daily lives to battle the climate crisis. 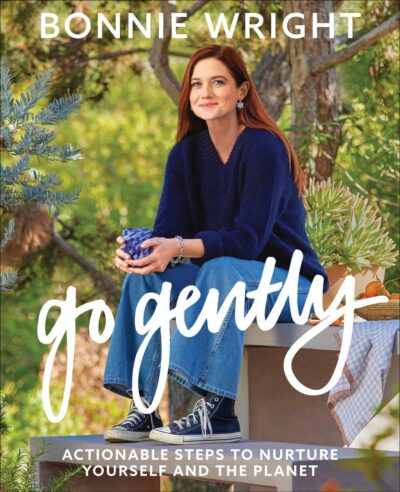 In an interview with the Washington Post, Wright said that the name Go Gently comes from her wanting readers to implement eco-friendly practices slowly and in a way that makes them sustainable over the long term. She also told Bustle she hopes to show readers that being environmentally conscious doesn’t just mean going to a climate rally; people can also take action behind the scenes or implement actions in their homes that will make a difference.

She suggested that people start small and try to intersect a climate issue they care about with something they like to do because people are more likely to commit to long-term habits if they are enjoyable. She also wrote a powerful statement in the Irish Examiner saying, “There is no wrong way to do the right thing. If we stop doing something in fear of getting it wrong, we will never really get anywhere.” Sustainability is often thought of as purchasing all sustainable products, but this book shows readers the opposite. This book shows that people can make and mend things they already own for them to last longer.

Wright’s concern for the environment, and more specifically, plastic pollution in the ocean, led her to become a  Greenpeace oceans ambassador in 2019. Her push to live a completely green lifestyle was inspired by an expedition she went on with Greenpeace to see the impact that microplastics have on the environment, but she decided to take on smaller, more manageable changes in her day-to-day life that she could maintain. She used her platform to share sustainability tips, and the positive feedback on these posts inspired her to take on this project.

She recently participated in the Big Plastic Count with Greenpeace, which ran from May 16 to 22. Sky News reported that the event measures the scale of Britain’s waste problem by using the data collected from the estimated 140,000 volunteers across the United Kingdom. The data will be used to paint a picture of the scale of plastic waste in the country, which is important because according to Greenpeace, the United Kingdom is one of the biggest producers of plastic waste per person, second only to the United States. The results of this information could encourage governments and supermarkets to do more to combat this issue.

Today is the final day of The #BigPlasticCount!

To everyone who joined in – thank you! You’ve made history by taking part in the UK's biggest ever investigation into plastic waste. 💪

And remember, when the counting is over please submit your results. 👉 https://t.co/Ltoixb5NjL pic.twitter.com/ABS094yW5u

When speaking with BBC Radio 5 Live, Wright talked about her Potter costars Emma Watson’s and Evanna Lynch’s activism. She thought it was interesting that all three of them became activists in their own areas of interest. Each of them has a natural curiosity in their respective areas of interest, and she noted that they were fortunate to have a platform to amplify them.

This week's Under The Spotlight guest @thisisbwright on why the @harrypotterfilm cast is full of passionate activists.

Tune in now for her chat with @thewhitmore or catch it as a podcast soon on @BBCSounds📲 pic.twitter.com/qnFDx1x8J4

She hopes readers will use the information in her book to enact change because the planet needs everyone’s help. Wright also said that if a person finds it difficult, despite their best efforts, to become less wasteful, it’s a sign that there is a systemic issue that needs to be addressed. If people are not given enough choices in the products available, a campaign for larger social change is needed. With the data that was generated from the Big Plastic Count, hopefully, this change can happen so consumers have more access to sustainable products.

Go Gently is currently available in Australia, Canada, New Zealand, the United Kingdom, and the United States in both print and audiobook formats.