Relive the Magic: “Return to Hogwarts” Set to Be Released on Blu-ray and DVD

Wizarding World fans will have a new opportunity to experience the magic with the Blu-ray and DVD releases of Harry Potter 20th Anniversary: Return to Hogwarts. This special reunion of Harry Potter cast and crew members first premiered on HBO Max on January 1. The upcoming Blu-ray and DVD releases offer an exciting chance for fans who do not subscribe to the streaming service to watch the special.

The Blu-ray and DVD releases of Return to Hogwarts are set for August 9. The Blu-ray costs $24.98, while the DVD costs $19.98. They are currently available for preorder in the United States. According to the images on the Amazon listings, both the Blu-ray and DVD will include a special feature titled “Harry Potter 20th Anniversary: Return to Hogwarts Featurette,” but the contents of this featurette are currently unknown. The Blu-ray also includes a digital code to stream or download via Movies Anywhere.

In April, Return to Hogwarts aired on Cartoon Network and TBS as a tie-in promotion for the release of Fantastic Beasts: The Secrets of Dumbledore. Though this provided an opportunity for those who do not subscribe to HBO Max to watch the reunion, the Blu-ray and DVD release will allow viewers to watch the reunion at their convenience for the first time outside of streaming platforms. 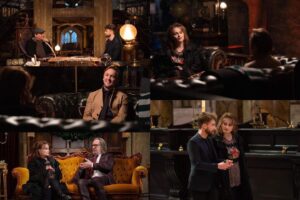 The special presents an emotional reflection on the cherished memories that the cast and crew, as well as the viewers watching at home, have from the Harry Potter films. With intimate interviews between cast members, viewers are treated to new insight into what it was like for the cast and crew to create each Potter film. While some cast members admit the hardships they faced during production, each cast and crew member spoke highly of the franchise’s lasting impact.

One particularly emotional moment from the special, featuring Robbie Coltrane, perfectly captures the legacy of the Potter movies for the cast and crew as well as for the fans.

The legacy of the movies is that my children’s generation will show them to their children, so you could be watching them in 50 years’ time, easy. I’ll not be here, sadly, but Hagrid will.

For those who purchase Return to Hogwarts on Blu-ray and DVD, perhaps it is wise to buy some tissues with it as well.