Before we get into the festivals, however, we’ve got an exciting announcement on Miranda Richardson (Rita Skeeter). She’s been cast in Season 2 of Fate: The Winx Saga. The show’s second season premieres on September 16, with Richardson set to take up the role of Headmistress Rosalind. The show follows a group of young fairies through a magical boarding school and will explore the fairies’ feelings about what they want to be when they grow up.

We’ve also got a Netflix casting announcement for Ray Fearon (Firenze). He’s been cast in the eight-part musical drama Champion, which will be set in South London. The show has been described as a “love letter to Black British music.” It will follow a family of musicians who are turned against each other when one member of the family is signed by her brother’s rival. The BBC will be streaming the show in the United Kingdom and Ireland, while Netflix will be taking the show worldwide.

We’ve got a trailer for a documentary narrated by Helena Bonham Carter (Bellatrix Lestrange) for you next. Three Minutes: A Lengthening will tell the stories of Jewish citizens in a small Polish village through the Holocaust. It is inspired by three minutes of footage shot by one of the citizens and will show the human cost of the genocide in a way that hasn’t been done before. The documentary debuted at last year’s Venice Film Festival and will come to theaters on August 19.

Speaking of the Venice Film Festival, this year’s lineup was announced earlier this week. Producer David Heyman’s film White Noise, which stars Adam Driver (House of Gucci) and Greta Gerwig (Isle of Dogs), will open the festival on August 31. The film is a dramatization of an average family’s life as they deal with everyday problems alongside the more abstract concepts of love and death, and it will mark the first time a Netflix movie has opened the festival!

Brendan Gleeson (Mad-Eye Moody) and Colin Farrell (Percival Graves, Fantastic Beasts) will also make an appearance at this year’s Venice Film Festival. Their film The Banshees of Inisherin, a drama set on a small Irish island, has been given a competition spot. This means that the film is in the running for this year’s Golden Lion award. Bill Nighy (Rufus Scrimgeour) will also be featured at the festival, although his film Living and Gemma Chan’s (Madam Ya Zhou, Fantastic Beasts) Don’t Worry Darling will only show non-competitively.

We're sticking to the Italian theme, although our next film won't be shown at the festival. Instead, we’ve got another teaser to show you, this time from Netflix’s upcoming retelling of a classic fairytale. We’ve been telling you about Guillermo Del Toro’s version of Pinocchio since both David Bradley (Argus Filch) and Ron Perlman (Gnarlak, Fantastic Beasts) were announced as part of the cast. This week’s teaser tells us more about how Del Toro has twisted the story, although we still don’t have an official release date from Netflix. Watch the trailer below and let us know what you think.

We’re heading over to Comic-Con in San Diego for our next three stories. First up, after the announcement of two more seasons of American Dad last year, we have a teaser clip, featuring a whole new special guest lineup for this season. One of the special guests is Jason Isaacs (Lucius Malfoy), who is set to play Jumpers, a frog who leads a manipulative gang. Check out the clip below.

Not only do we have a teaser clip for American Dad, but we also have a trailer for John Wick: Chapter 4. Natalia Tena (Nymphadora Tonks) will make her John Wick franchise debut in the film playing Katia. The film is set for release in March next year, and it will give us a further look into the life of well-known hitman John Wick (played by Keanu Reeves). You can watch the trailer below if you missed it at Comic-Con last week.

David Thewlis (Remus Lupin) and Stephen Fry (narrator of the UK audiobooks) also appear in a project featured at this year’s Comic-Con. Although neither made it to the event, a panel was held featuring other members of The Sandman cast and crew. A trailer was released as part of the panel, as well as an inside look into the plot from the author of the comic books, Neil Gaiman, and other Comic-Con exclusive interviews and clips. You can have a look at the trailer below.

The Toronto International Film Festival (TIFF) has unveiled more of the titles to be shown at this year’s festival, which will begin on September 8 and run until September 18. It was announced that Jack Thorne’s (cowriter of Harry Potter and the Cursed Child) film about two young girls who dream of competing at the Rio 2016 Olympic Games, The Swimmers, will open the festival. Eighteen Gala Presentations were also announced, including Hero Fiennes Tiffin’s (11-year-old Tom Riddle) The Woman King and Dame Emma Thompson’s (Professor Trelawney) What’s Love Got to Do With It?

There were also 45 titles added to the Special Presentations section of the program, including Eddie Redmayne’s (Newt Scamander, Fantastic Beasts) latest true-crime thriller, The Good Nurse, and The Menu, a darkly comedic horror starring Ralph Fiennes (Lord Voldemort). Samantha Morton’s (Mary Lou Barebone, Fantastic Beasts) The Whale also made the list, while TIFF became the second festival this week to announce The Banshees of Inisherin as part of its lineup.

Speaking of Samantha Morton, a trailer was released for her upcoming historical drama The Serpent Queen this week. Morton plays Catherine de Medici, one of the longest-serving and most ruthless rulers France has ever seen. The show is set to premiere on Starz on September 18 and will turn the genre of historical drama on its head with a more modern and contemporary twist. Check out the trailer and the newly released poster below. 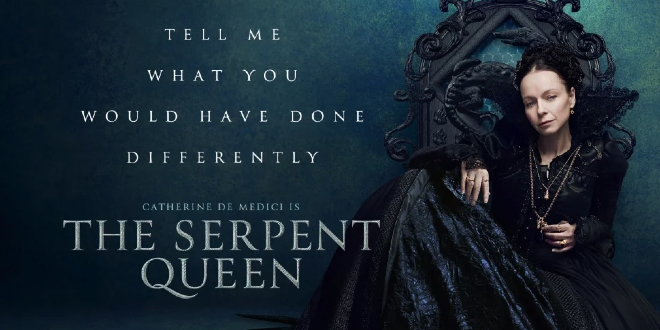 We’re heading back to Comic-Con next, specifically the Marvel panel. We got a first look at Disney+’s upcoming action miniseries Secret Invasion. The plot follows Samuel L. Jackson’s Nick Fury as he teams up with a rebel Skrull warrior to stop a full-on Skrull invasion. Carmen Ejogo (Seraphina Picquery) makes her Marvel debut in the show, playing an as-yet-unnamed character. Check out the teaser below.

We’ve got a change of venue for Cursed Child producer Sonia Friedman’s production of The Piano Lesson. The run, which begins previews on September 19, was supposed to take place at the St. James Theatre on Broadway but has since been moved to the Ethel Barrymore Theatre. We haven’t been given a reason for the move, although it has been rumored that the current production at the St. James, Into the Woods, may be extended.

We’ve got a trailer for Cursed Child coproducer Colin Callender’s most recent TV show to show you next. The Undeclared War is a thriller about a group of Government Communications Headquarters (GCHQ) employees. The employees must fend off a cyberattack on the UK’s electoral system in the run-up to a general election. The show will stream on Peacock on August 18, but until then, you can check out the trailer below.

Our last story this week is a new production written by Jack Thorne (cowriter of Cursed Child). The play will run at London’s National Theatre next spring and is based on a 1964 production of Shakespeare’s Hamlet. The Motive and the Cue will be directed by Sam Mendes (Shrek the Musical). We don’t have any details on casting or exact dates, but keep checking back for more details as they are released.

That’s a wrap on this week’s Casting News. Which of our trailers did you enjoy the most? Which film are you most excited to see hit the festivals this year? Let us know in the comments below!